Has anyone actually worked out yet what that Women’s March over the weekend was all about?

Or is it another of those things we’re just supposed to know – and the very fact we don’t know shows precisely how insensitive and unobservant we are?

My initial guess was that it might have been down to one of the following:

An unnoticed new hair do

Trash taken out – but without the liner being replaced

Nothing. No, seriously. There’s nothing wrong. Nothing at all. Really. Nothing.

If any of these had been the reasons, I can quite understand why hundreds of thousands of women took to the streets across the world to express their distress through the medium of screeching, placard-waving and ostentatious sporting of vulva-coloured headgear.

I know from years of hard-earned experience, involving not just sisters, girlfriends and wives, but daughters too, that these are the kind of vitally important issues never to be taken lightly let alone mocked even in the most affectionately humorous way.

But apparently – so I have since learned – the march was about none of these things.

According to Madonna it had something to do with blowing up the White House.

According to Michael Moore (not a woman) it was about stopping Betty De Vos (a woman: how does this work, exactly?) from becoming Secretary of Education.

According to Hamas-supporting, hijab-wearing co-organiser Linda Sarsour, it had something to do with that famous supporter of women’s rights, Islam.

According to Hermione Granger it was a lovely excuse to fly over from England with her Mum, to feel humble and try on some new bright red lipstick.

According to at least one of the girls in this photo I found on Twitter, it’s about “good scince”. Yay! Go, good scince! 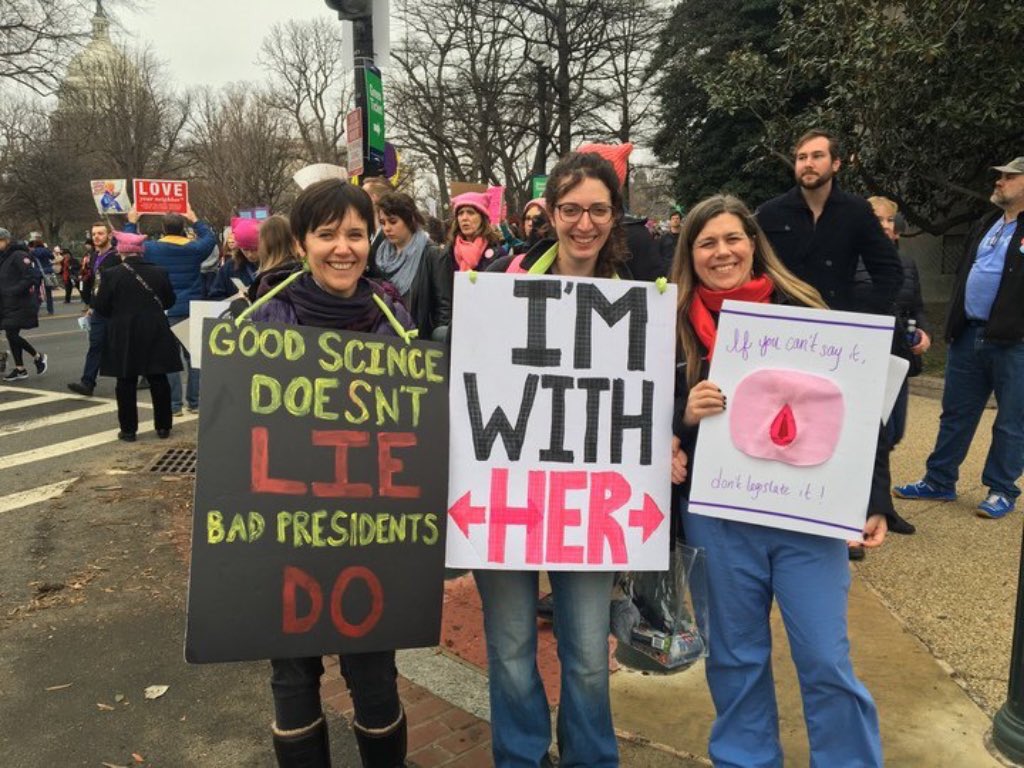 And according to former Wall Street Journal reporter Asra Q. Nomani (a woman, though not the right kind as far as the marchers are concerned, presumably), it’s basically just another tentacle of George Soros – the sinister, cat-stroking destroyer-of-worlds who Asra has found to have funded no fewer than 56 of the partners involved in the march.

So: nothing to do with real women with any real, actual, valid concerns they may have about the world, like, say, the enslavement of Yazidi girls in Iraq and Syria or arranged marriages for child brides from Pakistan or genital mutilation of girls in North Africa or Moroccan TV stations teaching battered wives how to cover up their bruises.

Instead: just another random protest march by the usual ragbag of leftist suspects, far too many of them blue hair, their whale-like physiques and terrifying camel-toes the size of the Grand Canyon.

There's a lot of men in DC tonight who are going to have to fetch their own beers from the fridge. Damn you, @realDonaldTrump!

But this is self-evidently impossible. Very few of these shrieking munters – save the token celebrities – will ever find themselves in a position where they are able to fetch a man’s beer from his fridge because first they would have to find a man willing to share the same space with them.

Still, when all is said and done I think we owe those women who took to the streets across the world in their various pod groups a massive favour. They have reminded us what a Hillary presidency would have looked like every single day for at least four years. And they have swept away any reservations we may have had about the absolute necessity of having voted for Donald Trump.