Sen. David Perdue is shoving the nation’s immigration debate in a radical new direction — he is trying to grow the economy by raising Americans’ average productivity, not by crudely raising the number of immigrant workers and consumers.

Perdue’s focus on productivity could put the nation back on a Switzerland-like strategy of high-productivity wealth generation, and away from President Barack Obama’s low-wage strategy of maximizing low-skilled immigration to provide more companies with more cheap laborers and more welfare-aided consumers.

“Here’s the issue,” Perdue told the Yahoo Finance All Markets Summit on Wednesday. “To grow the [annual Gross Domestic Product], you have to do one of two things — you either grow the population or you grow your productivity, and right now, we’re struggling to get our productivity growing again,” he said, adding:

Perdue is working with Arkansas Sen. Tom Cotton to push their Reforming American Immigration for Strong Employment, or RAISE Act. If enacted, the bill could raise productivity and wages by halving the inflow of unskilled immigrants and by boost the share of immigrants with valuable workplace skills.

Throughout Obama’s tenure, the nation’s workplace productivity grew 1.1. percent growth per year, amid a government-arranged flood of unskilled, welfare-dependent, relatively unproductive legal and illegal immigrants who only reduced average productivity. Obama’s productivity growth of 1.1 percent per year was a huge drop from the prior 20 years, when new computers helped boost the productivity rate among Americans by roughly 2.3 percent per year. 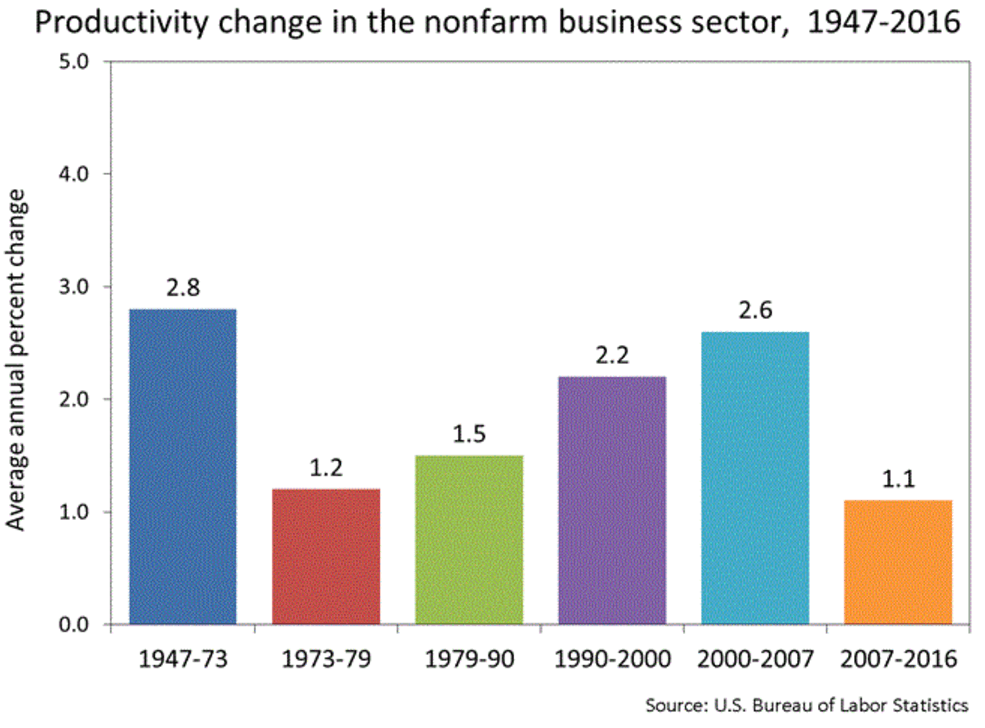 From 1947 to 1973, when immigration was low, the nation’s workplace productivity growth surged by 2.8 percent a year, and it pulled tens of million of people into the middle-class. Productivity grew because investors and employers developed labor-saving machinery that allowed each employee to produce more value per hour. That rapidly growing productivity boosted company profits and employees’ wages, creating a massive and prosperous middle-class, similar to Switzerland.

Labor costs have gradually dropped since 1965 because Congress opened up the nation to mass-immigration, and also began to indirectly subsidize employers who hire unskilled labor. The wage subsidies are delivered via welfare and poverty programs which supplement the low wages paid to unproductive workers.

The resulting oversupply of cheap labor and wage subsidies means that employers are under less pressure to develop productivity-boosting machines, have more incentives to rely on unskilled labor, and can afford to pay lower wages to Americans. “We see wages being absolutely suppressed because of the supply of low-skilled workers… it is a supply and demand issue,” Perdue told reporters Feb. 7.

For example, few Americans farmers have purchased productivity-boosting robots to milk their cows. Those robots are commonplace in Europe, where the cost of each employer is much higher. In the United States, sales of the machines fall whenever the federal government imports contract-workers and refugees to milk cows, an industry salesman told Breitbart News.

Roughly 800,000 young Americans graduate each from universities with skilled degrees in business, science, medicine and technology. But amid the inflow of contract workers, many of the American graduates are not working in jobs that match their technical skills. For example, from 2009 to 2013, “about one-fifth of underemployed recent college graduates—roughly 9 percent of all recent graduates—did work in a low-skilled service job,” says a 2016 report by two federal economic researchers.

The federal government’s policy of importing 2 million legal immigrants and contract workers each year lowers Americans’ salaries by roughly $500 billion a year, according to a Harvard professor. Nearly all of $500 billion is scooped up in greater profits for companies and investors.

Many Americans are unemployed or have given up looking for work. Roughly 10 percent of American “prime age” men, or 7 million men aged 25 to 54, have dropped out of the nation’s workforce, at enormous cost to themselves, their communities and to the nation’s economic health.  Many other Americans are stuck in low-wage work in the heartland of the nation, while investors create jobs for immigrants along the two coasts.

If the immigrant inflow is reduced, Americans’ wages will rise and investors’ stock prices will temporarily fall, according to a June 2016 report by a stock-market firm.