The bipartisan congressional language creates a headache for Trump and his deputies because it flips the politically difficult problem from Congress to the Department of Homeland Security of deciding whether to provide extra wage-cutting H-2B contract workers to companies or else to improve job opportunities for Trump’s blue-collar voters.

The new rule is opposed by pro-American groups, including the Federation for American Immigration Reform. According to FAIR’s Robert Law:

Increasing the number of low skilled foreign workers through a massive government funding bill is Washington at its worst. This is a clear betrayal of blue collar Americans who were hit the hardest by the Obama economy. Even after Trump’s victory, Congress is more interested in rewarding the business lobby’s thirst for cheap workers than getting their unemployed constituents back in the work force.

The new rule helps business groups offset rising pressure for wage increases, just 18 months before the mid-term elections when voters will vet the success or not of Trump’s “Buy American, Hire American” policies.

The H-2B language was hidden deep in the draft 2017 supplemental budget — which is to face House and Senate votes this week — and it surprised opponents of the legislation. In December 2016, Ryan had agreed to trim the program when the partial 2017 budget deal was announced just one month after blue-collar voters backed Donald Trump’s campaign promise of a low-immigration, high-wage national economic policy.

The language in the 2017 budget says the Department of Homeland Security has the authority to exceed the supposed 66,000 annual cap on H-2B outsourcing visas by a number equal to the maximum number of workers who benefited from an earlier exemption, dubbed the “returning worker exemption.”

Here's the text of the #H2B "returning workers" loophole that makes a mockery of the law's numerical "limits". https://t.co/G7dc1Qpmaz pic.twitter.com/Hf4UPjwJB4

The H-2B program allows companies that do seasonal work to import up to 66,000 foreign workers each year instead of recruiting and hiring Americans. The program is supported by Democrats and Republicans eager to aid local business groups, which are competing against each other for American workers, and which face competition from the companies that employ roughly 8 million illegal immigrants.

The program means companies don’t have to pay a premium to hire Americans for seasonal overtime work that leaves them unemployed in winter, and it also reduces pressure on the companies to recruit and train youths and marginalized Americans, including millions of Americans who have fallen out of the workforce.  The imported workers are also paid at rates that are lower than needed to attract Americans to those jobs — which also means that the companies can pay lower wages to their full-time American workers. 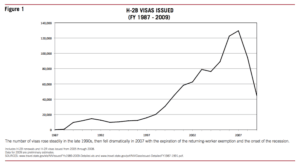 According to the horseracing industry website Bloodhorse.com, Alex Waldrop, the head of the National Thoroughbred Racing Association, predicted the new rule could double the size of the H-2B program this year. “It limits the total number of H-2B workers that may enter the U.S. during fiscal year 2017 to 129,547,” Waldrop said told the website.

In practice, companies will not be able to quickly recruit and import that maximum number of workers in 2017, partly because the DHS has yet to establish a process for handling the extra H-2B visa requests. But if the Ryan expansion becomes the norm, then lobbyists could use the DHS to push the H-2B program in 2018 back up to the 2007 level.

The H-2B program is backed by landscaping companies but is also strongly supported by the resort and hotel industries, forestry and shrimping companies and the horse racing sector. 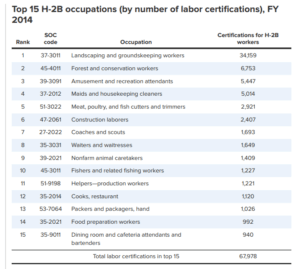 The H-2B program is backed by many politicians, notably Sen. Thom Tillis, a GOP Senator from North Carolina, Arizona Sen. Jeff Flake, and Utah Sen. Orrin Hatch. Ryan has a history of backing “any willing worker” rules which allow companies to import foreign workers instead of hiring Americans at wages sufficient to help raise a family.

The program is opposed by some left-wing groups, including the Economic Policy Institute.

The H-2B program is one of many contract-worker programs run by the federal government, which allow companies to annually hire roughly 1 million foreign white-collar or blue-collar workers for multi-year or seasonal jobs that can be filled by Americans. These programs include the H-1B program, which has allowed companies to create a domestic population of almost 1 million foreign professionals, including doctors, information-technology experts, designers, and accountants.

The annual inflow of 1 million contract workers is in addition to the annual inflow of 1 million legal immigrants. Every year, these two million new arrivals compete with the 4 million young Americans who enter the workforce each year, forcing down wages, driving up unemployment and transferring roughly $500 billion from employees to employers and investors. Several million working-age men have been pushed out the workforce by declining wages, say economists.