Police in Iceland are investigating a poison attack on Robert Spencer, an American expert on Islam who was also the 2015 target of a jihad assault in Garland, Texas.

“Reykjavík Metropolitan police are investigating a case where there are a suspicious that a person was poisoned,” according to an email from Grímur Grímsson, the detective chief superintendent who is working the Robert Spencer poison case. “Actions taken regarding the case cannot been [sic] revealed at this moment … At this moment, it is not clear” when there will be an arrest, he told Breitbart News.

Grímsson insisted that poison attacks are rare on the ethnically homogenous Iceland, which benefits greatly from the annual inflow of American tourists.  “Cases where there are suspicious [sic] that someone has been poisoned are very few in Iceland and it goes also for spiking tourists´ drinks with drugs,” he told Breitbart.

The doctor’s May 12 report shows that Spencer was poisoned with amphetamines and MDMA.

Spencer rested for several days and returned to his home in the United States.

He keeps his home address secret because of threats by Islamic groups to kill him for his on-target descriptions and best-selling books about how the Koran’s violent, intolerant and supremacist verses spur violence, intolerance, and supremacist claims by the Koran’s adherents. For example, Spencer correctly predicted that his 2015 artistic exhibition of cartoons about Islam’s founder would likely prompt Islamic adherents to attack the exhibition simply because orthodox Islam says critics of Islam should be killed. Spencer’s 2015 analysis was proved right, and two armed jihadis attackers were quickly neutralized by hired security guards at the Garland, Texas, event, which was also organized by Pamela Geller.

In a post on his website, Spencer wrote about the poison attack by the Icelandic man, who he described as a left-winger, not a Muslim:

I learned my lesson. The lesson I learned was that media demonization of those who dissent from the Leftist line is direct incitement to violence. By portraying me and others who raise legitimate questions about jihad terror and Sharia oppression as racist, bigoted Islamophobes, without allowing us a fair hearing, the media in Iceland and elsewhere in the West is actively endangering those who dare to dissent…

All over the West, as Leftist students riot and physically menace conservative speakers and Leftist spokesmen indulge in the most hysterical rhetoric to defame their foes, politicians cower in fear and decline to discuss these issues, only ensuring that the problems I identified when I spoke in Reykjavik will continue to grow in Iceland and elsewhere.

As they were rising to power in Germany, the Nazis indoctrinated their young followers with the same message: those who oppose us are evil. Those who brutalize them are doing a great thing. The Left’s demonization of its opponents today will lead to exactly the same thing. It already has for me, in beautiful Reykjavik.

The new poison attack was delivered shortly after Spencer had given an invited lecture on May 11 to 500 Icelanders about the role of jihad, sharia, and war in Islamic theology. Spencer’s lecture was ignored by the Iceland press, which extensively quoted the 50 protestors outside the lecture hall. Spencer wrote on his website, JihadWatch.org:

Articles in the Icelandic press included quotes from the 50 protesters, but none included even a single quotation or description of anything we had actually said. None quoted any of the 500 brave Icelanders who braved the hatred of the politically correct elites to come to the Grand Hotel to hear me and Ms. [Christine] Williams – a staggeringly large number in a country of 300,000 people.

Spencer said that he was hit when the attacker slipped drugs into his drink at a post-event celebration:

We took that marvelous Icelandic greeting as a cue to leave. But the damage had already been done. About fifteen minutes later, when I got back in my hotel room, I began to feel numbness in my face, hands, and feet. I began trembling and vomiting. My heart was racing dangerously. I spent the night in a Reykjavik hospital.

“We had chosen a restaurant that was far enough away from the venue to be free of any protesters,” Spencer told Breitbart. “But Iceland is too small and I am too recognizable for that. We were right out in the open at a public place, so it was easy for the guy to come greet me and slip something in my drink unnoticed.”

The doctor in the Rejkyavik hospital also badgered him, said Spencer.

He was quite unfriendly — bad bedside manner. He tried to downplay what happened, but it is still clear from the medical report: I tested positive for amphetamines and MDMA (Ecstasy). The doctor told me only that I had Ritalin in my bloodstream, and seemed skeptical when I told him that I never took Ritalin. He never mentioned the MDMA to me; I only saw it when I looked much later at his written report. He told me he thought the tests were mistaken and that I had simply had a panic attack. That’s actually a symptom of MDMA overdose.

I’ve never had a panic attack in my life, even after jihadis attacked our event in Garland. Also, why would I have a panic attack after a successful event? … He also went on about stress, urging me to stop doing what I do, without any evidence that I have ever found it particularly stressful. His intent seemed to be to get me to believe that I had not been drugged, and should stop speaking out against jihad terror and Sharia oppression. Meanwhile, his report had to admit that I had been drugged, but said it was not a “serious poisoning.”

How much poison must one be given for the poisoning to be “serious”? I had most of the symptoms of MDMA overdose. That’s serious enough for me. 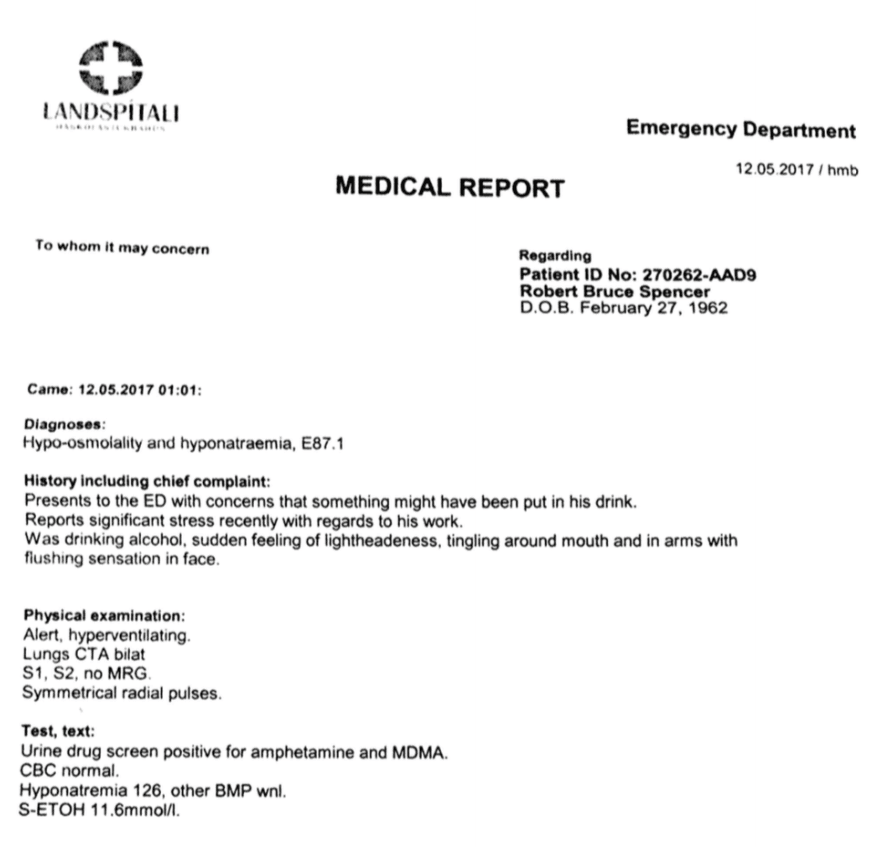 Iceland’s Ministry of Foreign Affairs did not return an email from Breitbart News.