GOP leaders and the agriculture industry are stepping up the pressure for more wage-cutting visa-workers following this week’s agreement by homeland security chief John Kelly to approve an additional 15,000 H-2B foreign workers.

On Tuesday, the subcommittee which appropriates money for the Kelly’s Department of Homeland Security adopted an amendment which would require him to approve even more H-2A visas for agricultural workers by allowing all farmers to hire H-2A visa workers for year-round work. The amendment was approved by a voice vote, so hiding which Republicans and Democrats voted for the wage-cutting proposal.

The vote came one day after Kelly bent to congressional pressure and agreed to print an extra 15,000 wage-cutting visas for H-2B workers for employers in landscaping, forestry, food processing, hotels, and resorts.

If adopted by the House and the Senate, the new amendment would likely flood the agricultural labor market with new low-wage H-2A foreign workers, and force down the wages of farm-working Americans — many of whom are recent immigrants. In 2013, farmers employed roughly 75,000 H-2A workers for seasonal harvests, according to the Economic Policy Institute.

The extra inflow of cheap H-2A labor would also reduce the growing incentives for farm companies to modernize and automate age-old farming practices which are largely unchanged since the Bronze Age, such as picking crops by hand, milking cows with dairy workers, removing weeds with sharp hoes, and growing crops outdoors. 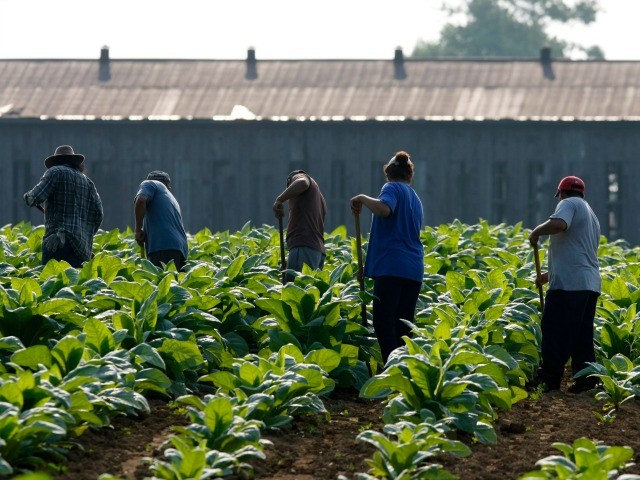 In front of the backdrop of the barn in which the burley will be stored, a group of farm workers makes their way across a tobacco field hoeing weeds out of the rows in the early morning Monday, July 11, 2011, near Sparta, Ky. Much of Kentucky is expected to be hit with high heat throughout the week. 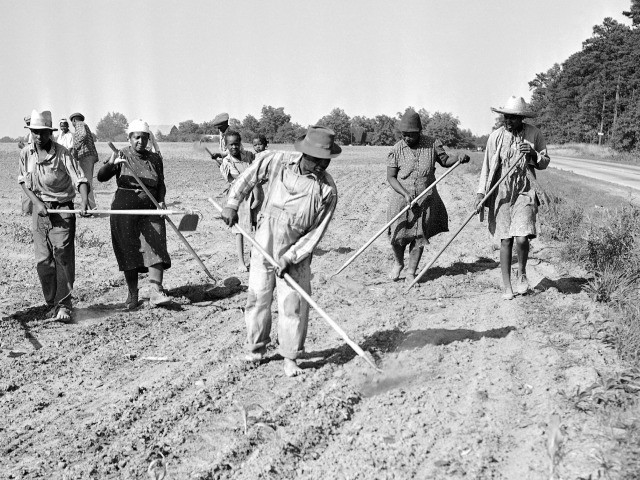 A group of American workers, both men and women, are shown chopping weeds in a cotton field, June 24, 1946, Athens, Ga.

For example, an increasing number of dairy farmers are now buying European-designed cow-milking robots because few Americans are willing to milk cows two or three times, every day of the year, for $10 an hour. The new cow-milking robots — some of which are being built by Americans in the United States — allow cows to milk themselves while the farmers are elsewhere. European companies and farmers are already using far more robots than American farmers partly because Congress allows American farmers to import cheap workers via the H-2A program instead of buying more expensive, but more productive, machinery.

The extra farm workers allowed by the amendment would also encourage American and illegal-immigrant farm-workers to migrate into towns and cities, furthering cutting Americans’ wages.

The amendment conflicts with the White House’s growing and popular push for a “merit based” reform of the nation’s cheap-labor immigration strategy.

The amendment was proposed by GOP Rep. Dan Newhouse, who owns a 600-acre farm which produces hops, tree fruit, grapes, and alfalfa. Before being elected to Congress, he was president of an industry group, the Hop Growers of America, and was director of the state’s agriculture department for Democratic Gov. Christine Gregoire.

“Today, large segments of American agriculture face a critical lack of workers, a problem made worse by the fact that the H-2A program is not working for all of agriculture,” said a statement from Newhouse. He continued:

Modern agriculture techniques that have become less ‘seasonal’ demand an update to this program because many segments of the agriculture industry are either no longer seasonal or have multiple harvests, one after the other. H-2A must be made more workable for farmers, and my amendment clarifies that all of agriculture may use H-2A so it operates effectively as our nation’s Ag guest worker program. My amendment does not change the time limits a worker employed through the H-2A program can stay in the U.S., and it would not change the requirements on farmers to show they are first hiring domestic workers. This amendment is a small starting point of relief we can provide our farmers who need access to workers.

The amendment is included in the 2018 spending bill which would provide $1.6 billion to begin extending the existing border fence with Mexico. According to the committee statement:

The House Appropriations Committee today approved its proposed fiscal year 2018 Department of Homeland Security (DHS) Appropriations bill on a vote of 30-22. The bill targets critical programs such as aviation security, border and immigration enforcement, customs activities, protection against cyberterrorism, natural disaster response, and efforts to stop the smuggling of drugs and people into the U.S. The legislation also includes $1.6 billion for physical barrier construction along the U.S. southern border.

The amendment would likely reduce the incentive for farm companies in Washington State to make high-tech investments, according to a June report in the Seattle Times:

The next big thing? Automated harvest. The technology is still in development, but many orchardists hope it will have widespread use in Washington within 10 years. Automating harvest would remove one of the industry’s biggest and most persistent challenges — labor costs.

“Yes, there is a lot of interest in it (automation),” [Ted] Fryhover [president of the Washington Apple Commission] said. “The [cost of] labor is just the tough, tough part.”

But, as with all innovations in the industry, automated harvest will cost money and take time to implement. For a robot to accurately and efficiently pick fruit, the orchard has to be uniform.

According to Politico, some Democrats say they are opposed to the cheap-labor plan:

Labor isn’t on board, however. United Farm Workers President Arturo Rodriguez called the existing guest worker program “deeply flawed” and said he was “stunned” two Democrats supported the measure. At the markup, Rep. Rosa DeLauro (D-Conn.) said unions had “just learned” about the amendment and didn’t support it.

Democrats may choose to oppose the Newhouse cheap-labor bill unless it is attached to legislation allow other illegals to eventually become citizens and voters.

The union of farm workers opposes the measure. “How can House Republicans vote to expand the deeply flawed H-2A agricultural guest worker program into an industry for which it was not designed—an industry where many U.S. dairy workers died gruesome deaths by drowning in manure ponds last year because too many dairies deny American workers basic labor protections?” said a statement by United Farm Workers President Arturo Rodriguez. The statement continued:

We are stunned Reps. Pete Aguilar (D-CA) and Henry Cuellar (D-TX) voted for the amendment authored by Rep. Dan Newhouse (R-WA). Only employers hiring seasonal farm workers have been eligible under the long-existing H-2A program on the assumption that such workers are more difficult to find. H-2A visas have not been available for dairies because most of the jobs they offer are year-round. That is why the House Republican amendment is unprecedented. The H-2A program itself has also been beset by abuses both of imported guest workers and U.S. farm workers who have displaced despite assurances that American workers have first pick at those jobs.

However, the farm workers union instead called for the legalization of the huge number of illegal immigrants now working on farms. It said:

A workable solution to the agricultural industry’s labor problems in HR 2690, by U.S. Rep. Luis V. Gutierrez (D-IL ), which would give experienced farm workers presently laboring on U.S. farms the chance to legally remain working in agriculture rather than importing substantial numbers of additional guest workers from outside the country. HR 2690, with 53 co-sponsors, would resolve growers’ labor needs by letting domestic farm workers who are undocumented earn legal status.

In fact, if illegal immigrant farms workers are legalized, most would immediately move to the nearest city to compete with Americans for better-paid jobs. Their departure would allow a new wave of illegal immigrants to take their jobs in U.S. farms, further reducing the incentive for agriculture companies to invest in American-made robots and high-tech machinery.

Agriculture Secretary Sonny Perdue is also a champion of cheap labor for farmers, despite the damage done to productivity in the farming sector. In April, he told a group farmers that sending the huge population of illegal-immigrant agricultural workers home is not “my focus.”

Roughly half of the 2.5 million workers on farms are Americans or new immigrants. The other half are illegal immigrants, according to various estimates, many of who will migrate to U.S cities where they will pressure down wages paid to Americans and new immigrants.