President Donald Trump’s son-in-law set up a secret back channel to help a top Democratic Senator lobby White House officials in favor of the “DACA” amnesty for 800,000 young illegals.

Sen. Dick Durbin, the second-ranking Democratic Senator, spilled the beans in an interview with Reuters, where he described how he worked with  Jared Kushner and liberal Republican Sen. Lindsey Graham to promote the DACA amnesty in April and July.

According to Reuters’s account, which describes the illegals as “Dreamers”:

“We initially had a conversation (with Kushner), at [Iowa Republican] Senator (Chuck) Grassley’s invitation, on criminal justice and I asked Mr. Kushner afterwards if we could talk about immigration, separate and apart from Senator Grassley, which we did,” Durbin said.

“I went into … DACA because I was concerned about how this was going to unfold,” the Illinois lawmaker said. The conversations underscore a level of interest in the issue among senior White House aides that could lend momentum to the congressional debate on approving a permanent legislative fix for the Dreamers that Durbin has sought for the past 16 years 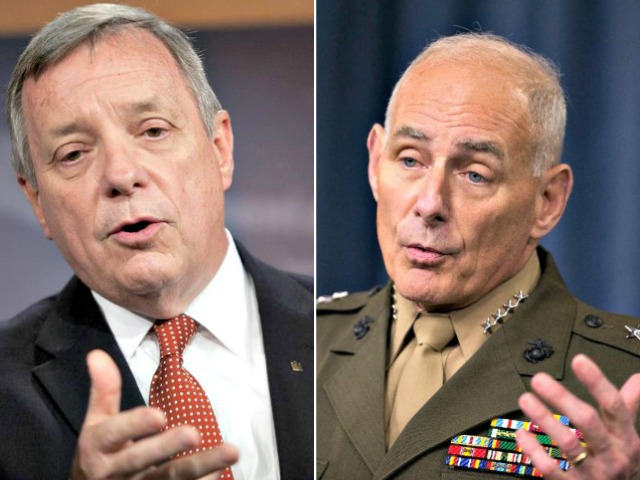 For 16 years, Durbin has been the principal Democratic advocate pushing for an amnesty for the younger illegals who were brought into the country as children by their illegal immigrant parents. Roughly 800,000 young illegals got work-permits from former President Barack Obama’s 2012 DACA amnesty, and roughly 1.2 million additional illegals were either too young or too ill-educated to qualify for Obama’s amnesty.

Durbin did not talk to Trump during the process. He told Reuters’ that Trump’s decision to end the 2012 amnesty created by Obama was a disappointment which has been but partly offset by Trump’s subsequent tweets “that were more encouraging and they continue even until this morning.”

Durbin also reported that Trump’s policy aide, Steven Miller, maintained the same pro-American immigration priorities that he has championed since at least 2013 when he was worked as a top aide to then-Sen. Jeff Sessions. “There was nothing in my conversation with him that suggested” had walked away from his policies, Durbin told Reuters.

However, the joint effort by Kushner and Durbin may be working. On September 6, Trump suggested he would sign the Democrats’ amnesty legislation in exchange for some improvements on “border security.” The White House transcript said:

Q    And what would you like to see, Mr. President, in legislation?

THE PRESIDENT:  I’d like to see something where we have good border security, and we have a great DACA transaction where everybody is happy and now they don’t have to worry about it anymore because, obviously, as you know, before, it was not a legal deal.  It was a deal that wouldn’t have held up and didn’t hold up.  And even President Obama when he did it, when he signed it, he said this is obviously not something that’s — he called it short-term.

I’d like to see a permanent deal, and I think it’s going to happen.  I think we’re going to have great support from both sides of Congress, and I really believe that Congress is going to work very hard on the DACA agreement and come up with something.

That amnesty-for-border-security deal is a long way short of Trump’s campaign promise of an effective border wall and is also very far short of his advocacy for the popular Raise Act merit immigration reform. The Raise Act would reform the nation’s immigration laws to help raise wages and opportunities for the 320 million Americans who dream of better lives for themselves and their children.

Read about the RAISE Act here.