On Sunday, Omar falsely alleged that pro-Israel groups and individuals had bought the support of members of Congress. The main group she targeted, the American Israel Public Affairs Committee (AIPAC), does not even donate to candidates.

On Monday, Democratic leaders condemned her remarks and she issued an apology.

Omar, using her congressional account, then retweeted left-wing pundit Judd Legum, who attempted to create an equivalence between Omar’s antisemitic tweets, and a tweet by Rep. McCarthy’s last year accurately noting that George Soros, Tom Steyer, and Michael Bloomberg were major contributors to the Democratic Party in 2018. 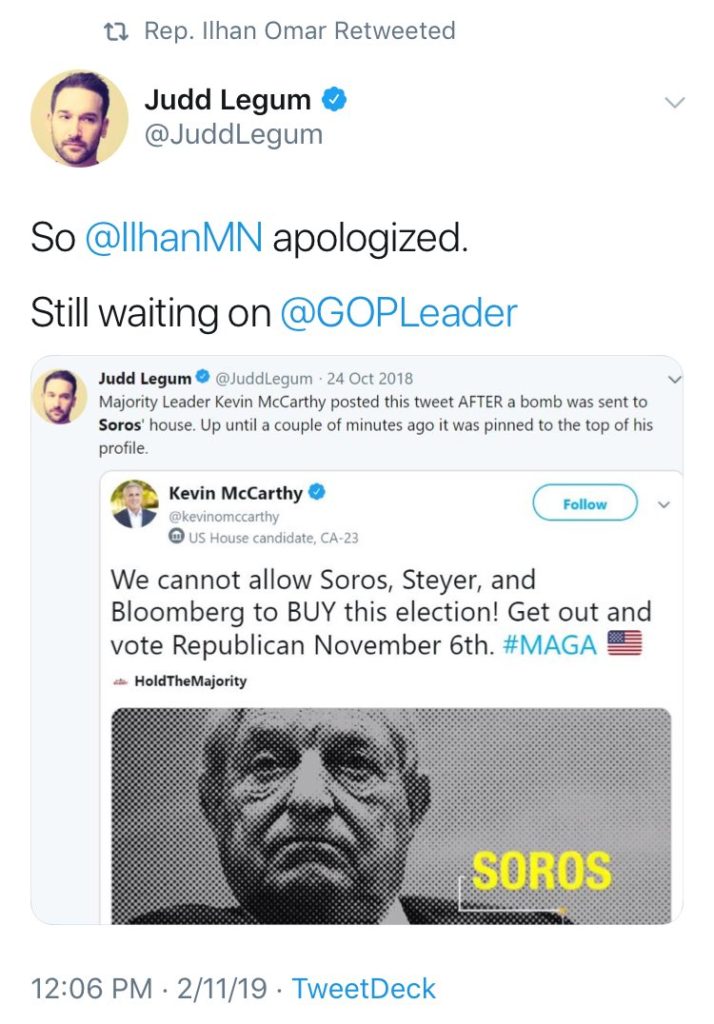 Bloomberg, the media mogul and former New York City mayor, was the top Democratic contributor of the 2018 cycle, spending $95 million. Steyer, a financier who is spearheading an campaign to urge Democrats to impeach President Donald Trump, was second, at $73 million. Soros, a long-time supporters of Democratic candidates and left-wing organizations, was fifth, at $19 million, according to campaign finance date compiled by OpenSecrets.org.

Bloomberg and Soros are Jewish. Steyer is an Episcopalian — though, after McCarthy criticized him, he suddenly began talking about his Jewish heritage, noting that his father was Jewish. (Jews trace decent through the mother.)

McCarthy deleted his tweet, concerned that it might be misinterpreted in light of the mass murder at the Tree of Life synagogue in Pittsburgh. Omar’s tweets remain live — as does a 2012 tweet she has acknowledged is offensive.

Israel has hypnotized the world, may Allah awaken the people and help them see the evil doings of Israel. #Gaza #Palestine #Israel

The Simon Wiesenthal Center, one of the foremost authorities on antisemitism, rejected Omar’s apology, which had included a caveat that she would continue to oppose AIPAC, among other lobbyists on Capitol Hill. (She retweeted the support of the Muslim Public Affairs Council on Sunday, which is also a lobbyist group, albeit on the other side of the Israel issue.)

The Simon Wiesenthal Center noted that Omar’s rhetoric had been “no slip of the tongue.”

Apology not accepted! @IlhanMN breathless, cynical and targeted use of #antisemitic tropes, no slip of the tongue. She can’t fathom why any American would support #Israel – a nation she hates
https://t.co/sTtb8cVudA

However, Pelosi declined to remove Omar from her committee assignments — including the House Foreign Affairs Committee, where her views would play a role in determining U.S. policy toward Israel.

McCarthy has promised to take action against antisemitism in the House later this week.