Two opinion polls in Mexico show a strong shift against allowing Central American illegal migration up to the U.S. border.

If the polls are valid, the shift in Mexican attitudes could allow President Donald Trump and Mexican leaders to block most illegal migration — despite strong efforts by the Democratic Party in Congress to cut funding for border enforcement and to block Trump’s “Return to Mexico” policy.

The Mexican opinion shifts come as the nation’s left wing leaders begin implementing the June 7 anti-migration deal which was drafted after Trump threatened to impose tariffs on Mexico. For example, UPI reported June 25 that “Mexico has deployed nearly 15,000 troops to its northern border as part of efforts to stop migrants from entering the United States, the country’s Secretary of Defense Luis Cresencio Sandoval said.”

Well, this week, I consider them [Mexico’s government] a friend. They’ve been doing a great job actually. We signed an agreement last week, they have 6,000 people going to their southern border … [But] I have to see how they do. They can easily stop [the migration] if they want to. They can easily stop this enormous migration to the United States … Mexico has been great for the last week and a half… if they weren’t great, I would put tariffs on them.

I think we both won [from the deal] … So far, it looks like Mexico is doing a great job for Mexico and the United States – so far. But it is only a week and a half.

The newest opinion poll comes from El Financiero, the Mexican version of the Wall Street Journal, which reported that:

63 percent of respondents in a survey conducted by El Financiero believe that the Mexican government should close the border to migrants … nine points more than what had been registered two weeks ago, with 54 percent.

According to the survey, 68 percent agree with sending the National Guard to the southern border to deal with migrants, while 29 percent disagree with that measure, which is one of the points of the agreement between the governments of Mexico and the United States to stop the application of tariffs to Mexican products.

with respect to Central American migrants, Mexican public opinion shows a strong-arm attitude: according to the survey, 75 percent of those consulted agree that Mexico should deport the migrants illegally entering the national territory , compared to 21 percent who disagree with the deportation. 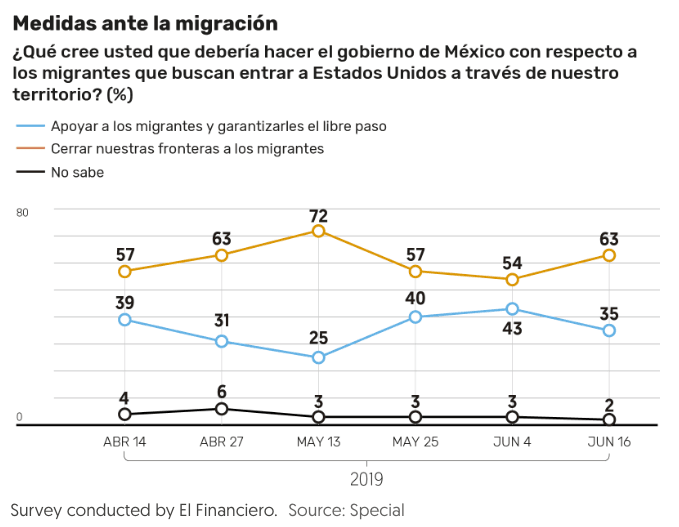 The new poll follows a June 12  poll by the pro-migration El Universal newspaper, which reported:

the percentage of Mexicans who agree with preventing the entry of undocumented migrants is on the rise and almost 60% is against granting asylum to them, and a similar number is against giving them work visas.

Those who are against migrants and foreigners are starting to become a majority in Mexico. We can’t forget that for decades, Mexicans experienced that treatment in the U.S. when they were looking for a better life. No one is asking for a massive entry of migrants but rather an orderly and regulated flow. Now the government and society are about to face a difficult test.

The newspaper’s graphics showed that opposition to the migrant route rose from 48.9 percent in October 2018 to 61.5 percent in June 2019. Support for the migration route dropped from 45.7 percent to 33.2 percent over the same period. 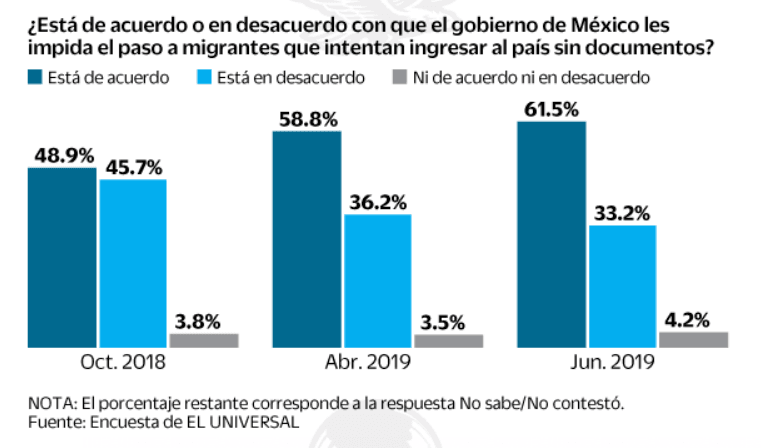 In Arriaga, a town in the southern state of Chiapas, The Associated Press saw about 100 migrants bused to detention Sunday, while Milenio TV reported that 146 more were pulled from a private home in the central state of Queretaro and more than 100 were taken away from a hotel in the Gulf state of Veracruz.

Significant numbers of migrants appear to still be crossing into Mexico, but they are traveling in smaller groups and under the radar.

Elias Camacho, coordinator of the 84-bed Hogar de la Misericordia migrant shelter in Arriaga, said that on average at least 15 migrants show up each day at his shelter. He said private homes in the town also take in migrants.

On June 19, Fox News reported some public approval for the new security measures:

TAPACHULA, Mexico — Unprecedented and inconvenient, the influx of thousands of National Guard into southern Mexico is nevertheless being welcomed by many residents near the Guatemala border.

“We agree with the National Guard coming because we are invaded with people,” said Arcla Martinez, who sells chicken in a market in Tapachula. “We do not want them coming in.”

A few stalls down, Juan Antonio Rivera toils over a 50-year-old black Singer sewing machine repairing handbags and backpacks. “It is good that he (Mexican President Andres Manuel Lopez Obrador) is doing that because he is doing it to protect us,” he said. “Immigrants should have a (authorization) card.”

Immigration by the Numbers

Flooding the market with cheap, foreign, white-collar graduates and blue-collar labor also shifts enormous wealth from young employees towards older investors, even as it also widens wealth gaps, reduces high-tech investment, increases state and local tax burdens, and hurts children’s schools and college educations. It also pushes Americans away from high-tech careers and sidelines millions of marginalized Americans, including many who are now struggling with fentanyl addictions. The labor policy also moves business investment and wealth from the Heartland to the coastal cities, explodes rents and housing costs, shrivels real estate values in the Midwest, and rewards investors for creating low-tech, labor-intensive workplaces.