A poll released by Education Next finds those who identify as Democrats are divided on the issue of school choice along racial and ethnic lines, with black and Hispanic Democrats more supportive of charter schools and school vouchers than whites in the party. 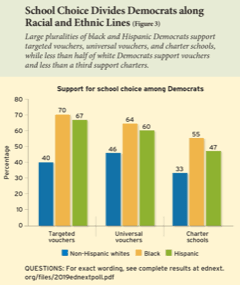 Results of the poll also found the percentage of American adults who favor tax credit scholarships – tax credits given to individuals and companies that donate to organizations that provide scholarships to low-income students – rose from 53 percent in 2016 to 58 percent in 2019. Support for school vouchers – the transfer of taxpayer funds to help low-income students with private-school tuition – rose from 37 percent in favor to 49 percent during the same period.

The poll found support from both major parties for tax-credit scholarships, with 65 percent of Republicans and 56 percent of Democrats in favor of them and 22 percent and 29 percent opposed, respectively.

Among Republicans, support for vouchers targeted to low-income families has risen 13 percentage points from 31 percent in 2016 to 44 percent today, while support for tax credits has jumped from 49 to 65 percent during the same period.

Support for vouchers among Democrats has increased to 52 percent support today from 42 percent in 2016.

A Breitbart News report in May focused on a key outcome of another poll, commissioned by Democrats for Education Reform (DFER) — which supports charter schools — and found “there is strong public support for public charter schools among key Democratic constituencies, particularly Black and Hispanic voters.”

Progressive charter advocates have some work to do with White Democratic primary voters who expressed the lowest favorability for public charter schools of all key demographic categories and who are also less likely to have their children enroll in and benefit from public charter schools.

The views of White Democratic voters seem to be a significant political impediment to parents of color gaining access to high-quality public charter schools that best serve their children.

The Education Next poll, administered in May, surveyed 3,046 adults, including an oversampling of teachers, blacks, and Hispanics.