Administration officials are backing Chad Wolf as a safe choice for the job of acting secretary at the Department of Homeland Defense.

Many pro-American immigration reformers are alarmed by Wolf’s pending role as acting chief in an election year, but officials say Wolf will keep the department’s top-level cadre of experts and lawyers who are promoting President Donald Trump’s “Hire American” policy.

“He is 100 percent in line with the President on these issues,” a senior administration official told Breitbart News, adding:

You want someone who is an operator like Chad, who knows how to get stuff done in the deep state, in the bureaucracy that has held up a lot of good things. A lot of strong people have been held up by the deep state and were not able to be as effective as they wanted. Chad’s been able to navigate it, and you want someone like him, pushing for the President’s agenda.

“Chad Wolf has been through this, he has been fighting the good fight, working with [Steve] Miller on a lot of these big priorities really since he’s been at the administration from day one,” a senior DHS official said. In February, Wolf was nominated to run the department’s Office of Strategy, Policy, and Plans, the official said, adding “the President trusts him enough not only to have nominated him for a very senior role within the agency but even to give him that that promotion [to acting secretary].”

Breitbart asked the officials if Wolf would keep the cadre of pro-Trump lawyers and other experts who have been trained and placed into senior positions in DHS. “Yeah – that’s a very fair measure” of Wolf’s commitment, said the administration official.

Wolf has already asked one top lawyer to stay in his job, said a senior DHS official. “I came into the administration with [Sen.] Jeff Sessions,” he said. “I worked for him, and then I was personally hand-picked to come over to the White House to help out on immigration issues, and I did that for a year and a half before coming over to DHS to continue working on these issues,” he said.

Wolf’s appointment is being made despite his prior role as chief of staff to former DHS chief, Kirstjen Nielsen, and despite his previous role as a lobbyist for the U.S. and Indian companies that are outsourcing many college graduates’ jobs to India’s workers.

Other candidates were either not interested in the job, did not show clear support for Trump’s “Hire American” policy — or could not get confirmed by the GOP Senators who oppose curbs on cheap-labor migration. That left the White House few short-term options except for the promotion of Wolf.

Because of his past lobbying, Wolf is recusing himself from policy debates over the roughly 800,000 H-1B workers in the United States. These workers — and 100,000 of their spouses — have replaced hundreds of thousands of well-paid Americans. This cheap-labor policy has hollowed out numerous American technology companies — but it has given a financial boost to U.S. investors, to the imported Indian H-1B workforce, and to India’s government.

Wolf’s elevation is a disappointment to immigration reformers.

“I can’t think of anything good to say about it,” said Jessica Vaughan, policy director at the Center for Immigration Studies.

It is a disastrous pick, at least on the legal immigration front. The president has named someone who was part of a team that was at the helm during the beginning and middle of the border crisis — there’s really nothing to justify his appointment other than the fact he was there, and that’s a bad reason to name him. He’s Kirstjen Nielsen with the extra added baggage, only more of a direct enemy of the American workers.

“The only enterprise Chad Wolf will be running is ensuring corporations get their cheap foreign labor, while American graduates are thrown out of the labor force,” said a tweet from U.S. Tech Workers, which was formed to protect American graduates from imported H-1B visa-worker. “This guy was a lobbyist for NASSCOM – [the] Indian Outsourcing Organization that lobbied for more H-1B visas.”

Notably,  advocates for greater migration have kept silent about WOlf’s promotion, suggesting they see him as a potential ally.

“The DHS job has been given to someone else who actually might be confirmable,” said a tweet from Greg Siskind, an immigration lawyer who favors a pending bill, S.386, which would provide U.S. citizenship to Indians graduates if they agree to take U.S. jobs from U.S. graduates.

Trump will let Wolf work as the acting DHS secretary, but will not nominate him for the permanent job, according to White House statements.

The administration has not identified the person who will be nominated to take the job fulltime.

Pres. Trump needs to pick a new secretary for the Dept. of Homeland Security — and the leading candidate is a lobbyist for the Indian & US companies that use H-1Bs visas to send roughly 2 million good college-grad jobs to Indians. https://t.co/2Y02rjvDp0

The decision leaves Trump with an acting DHS secretary, pending the confirmation of an unnamed DHS secretary.

DHS is a huge agency with a 2019 budget of more than $50 billion. It includes three immigration agencies, as well as the U.S. Coast Guard, the Secret Service, the Federal Emergency Management Agency, plus departments tasked with helping to defend the nation’s digital networks and critical infrastructures, such as power plants and railways.

Trump’s decision suggests he will not try to shrink the H-1B program in 2020, even though he denounced the program in 2016.

The H-1B has smashed up the careers of many U.S. technology graduates. The H-1B program is strongly backed by U.S. investors, partly because it is the main program for importing foreign contract-workers into U.S. college jobs. Overall, roughly 1.5 million foreign graduates hold U.S. jobs, after having arrived via the H-1B, H4EAD, OPT, CPT, L-1, TN, or B1 visas.

Trump’s inaction on the visa programs is a lost opportunity to rebuild GOP support among the hundreds of thousands of college-graduate voters who are being sidelined by imported Indian graduates.

The New York Times reported November 4 that Trump has a 24-point lead among white non-college voters. Still, his support among college-graduate whites lags behind likely Democratic 2020 candidates by roughly eight points. That is a big gap in a demographic that voted for the GOP until 2008. 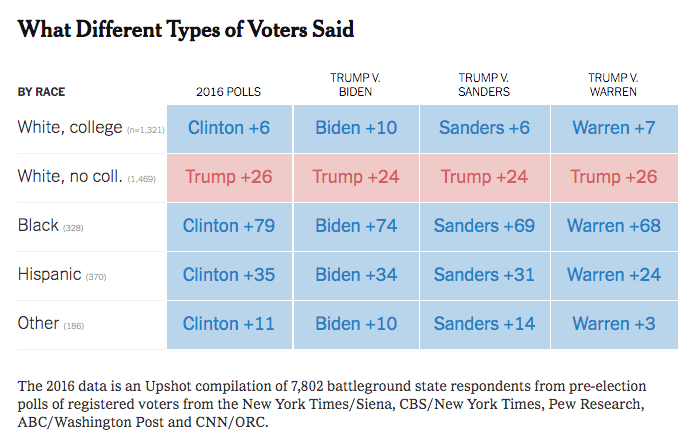 The Wolf appointment shifts the balance of power between the high-wage, low-immigration reformers and cheap-labor lobbies, said Vaughan.

The cheap-labor lobbies are focused on preserving the continued inflow of foreign workers, especially higher-value college-graduate H-1B workers, she said. This lobby can count on supporters such as Wolf, on Department of Labor appointees, and in the Office of Management and Budget, she said.

In contrast, reformers prioritize the border wall and reforms to block the mass migration of unskilled blue-collar workers into the United States, she said. Those goals are supported by Matt Albence, the acting head of the Immigration and Customs Enforcement agency, Mark Morgan, the acting commissioner of U.S. Customs and Border Protection agency, and by Ken Cuccinelli, the acting head of U.S. Citizenship and Immigration Services agency.

When serving as acting DHS chief, Wolf and his top aides “should not interfere with what the immigration agency chiefs say,” Vaughan said, adding that Wolf and his aides:

Should keep their focus on the wall. They can deliver on that because the cheap-labor interests are willing to put up with more border security as long as there is not too much interior enforcement and as long as they can get [imported] visa workers … The wall is a price [cheap-labor groups] are willing to play [while] they try to muddle up interior enforcement, block visa-reforms that will cause them problems and push for [visa] increases with their allies in Congress.

White House aide Steven Miller may try to ensure Trump’s priorities are pushed, she said. But, she said, “he cannot run the Department of Homeland security — he’s doing other things, and it is a big agency.”

He can go to [OMB director Mick] Mulvaney, he can go to [agriculture secretary Sonny] Perdue, he can go to people at the labor department. There are as many people in the White House and other agencies who will also be eager to [work with Wolf to] put the breaks on [Trump’s] reforms which will help American workers and make it harder for the cheap labor employers … [Wolf]  is going to become the person that all the career people go to. They see him as their instrument to justify the resistance.

For example, cheap-labor advocates are working with Congress to raise the inflow of Indian graduates into jobs sought by U.S. graduates and expand the inflow of refugees in the agriculture work. They are also working with Perdue to amnesty illegals and freeze wages throughout the agriculture sector, and with Mulvaney to preserve the work-permit giveaway to the spouses of Indian visa-workers. Cheap-labor advocates also oppose a draft plan to deter Mexican migration by delaying the award of work permits to Mexican asylum seekers.

This broad push to maximize the flow of labor may be having a huge impact on wage levels in Trump’s ‘tight labor-market’ economy. Any cutback in the foreign labor supply may force employers to start competing for American workers, so driving up salaries and reducing stock values.

Trump is facing this widespread resistance in his agencies because his deputies failed to put Trump supporters in major jobs, said Vaughan. These resulting network of anti-Trump appointees “are working to block the reform agenda that president said he wanted,” she said.

I've worked with Chad Wolf for the past five months and I have no doubt he will continue the acceleration of success on behalf of @realDonaldTrump’s agenda. Looking forward to more winning!

Cuccinelli told Full Measure News that he has had to deal with 27 employees who leaked to the media and other places:

It’s sort of an open secret that there are people in the federal government who align themselves … with a progressive or liberal agenda on some of these issues than a conservative or President Trump agenda. Have you run into that?

Cuccinelli: I have encountered that. I will tell you that in my first 100 days here we disciplined 27 leakers. We have a handful more still in the pipeline for discipline. I have had confrontations unfortunately with employees instigated by them, not by me, on policy matters that our agency is engaged in, and I think those discussions, frankly, are more appropriate to the political arena than to an employee-management relationship.

Establishment media outlets prefer to ignore the economic impact of these fights, partly because they prefer to cover migration as a racial and civil rights matter, not an economic fight.