New York City Mayor Bill de Blasio’s “snitch line” has been forced to shut down because America is still America and the blowback was freakin’ awesome.

Oftentimes we use George Orwell’s seminal novel 1984 as a metaphor for something we don’t like, a metaphor for government overreach and the like. In this case, a metaphor is not necessary. Thanks to Comrade de Blasio, we are now allowed to use the word “literally” while referencing 1984, as in de Blasio is literally embracing 1984’s villainous Big Brother by literally asking Americans to snitch on their fellow Americans — to call the police should a friend or neighbor go for a walk, or something.

The response was glorious.

The Daily Mail reports the hotline had to be shut down after “members of the public vehemently criticized the ‘tyrannical overreach’ the hotline posed and within hours it was flooded messages of contempt for de Blasio instead.”

“[M]essages included photos of extended middle fingers and links to articles about de Blasio breaking his own social distancing instructions.”

One amazing American who deserves a Pulitzer “photoshopped the video of de Blasio announcing the tip line, adding a Hitler mustache to his lip and a Schutzstaffel Nazi logo to his suit jacket[.]” 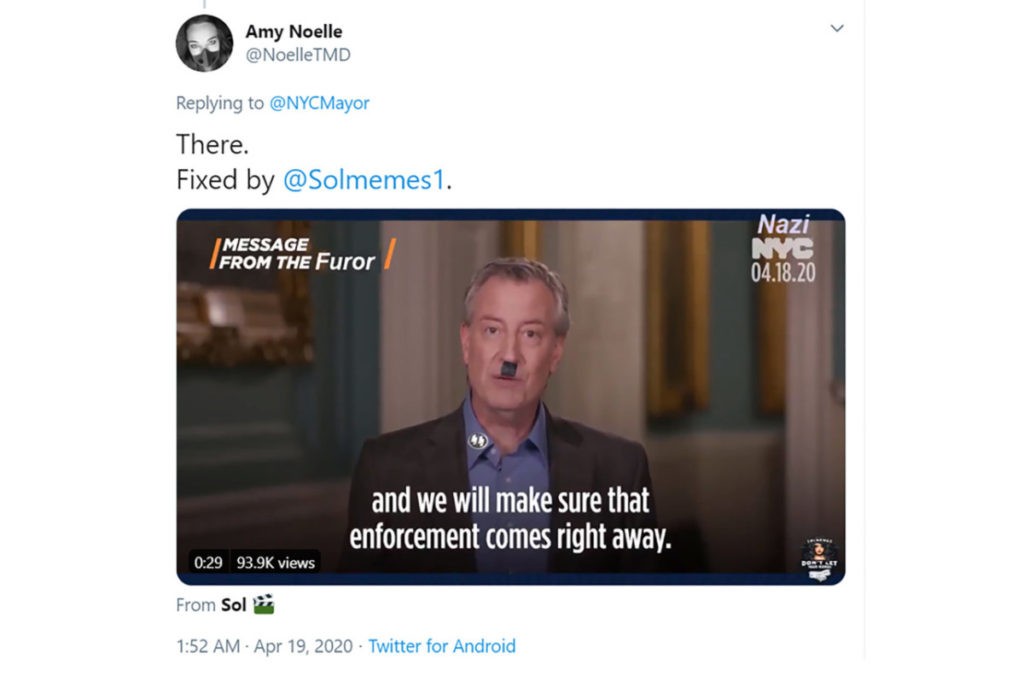 There were also penis photographs, a request to “eat a bag of dicks,” and a reminder that “snitches get stitches.”

Eventually, the NYC311 system was so flooded with all this great Americanism, it had to be shut down.

You know, everyone in my little neighborhood is practicing social distancing, even though we have about a dozen kids between the ages of four and 11 here who, pre-pandemic, used to all play together. But if I saw them still playing together, I wouldn’t even dream of snitching.

Sure, it would be a violation of my state’s stay-at-home rules, but if these families choose to allow this, how does this harm me?

On the other hand, if I caught someone in the neighborhood licking the handles of everyone’s mailbox, I’d call the police … probably to turn myself in for beating the guy senseless.

Come on, let’s be reasonable here.

The government encouraging Americans to snitch on other Americans… Good grief.

To begin with, people don’t need to be encouraged to report legitimately dangerous behavior. But when the government advertises snitching, the ways in which it can be abused to settle scores and satisfy grudges is fairly obvious.

But this is how totalitarians on the left think… To their twisted minds, this is righteous behavior.

You see, leftists are made deeply uncomfortable by the messiness of freedom. Conformity is the goal. Rigid conformity, and if that conformity can only be achieved through a Stasi-like climate where citizens live in terror of being turned in to the authorities by friends and neighbors, so be it.

Leftists are also elitists who do not believe the rules apply to them… This is why, while infected with the coronavirus, CNNLOL’s Chris Cuomo was out gallivanting in New York on Easter Sunday, and why de Blasio violated his own stay-at-home orders for a trip to the gym.