President Donald Trump’s Department of Homeland Security quietly adopted a second tactic to speed the inflow of foreign H-1B workers into U.S. jobs — even though hundreds of thousands of American graduates are expected to lose their jobs in the next few weeks.

An email sent out March 19 told companies that the U.S. Citizenship and Immigration Services (USCIS) agency would accept electronic signatures instead of the original ink signatures that are normally required on the I-129 forms that must be filed to import foreign visa-workers:

We will accept all benefit forms and documents with reproduced signatures. … For forms that require an original “wet” signature, per form instructions, USCIS will accept electronically reproduced original signatures for the duration of the National Emergency,

The announcement came after the agency said it would speed the overall process by barring wealthier employers from buying their way to the front of the processing line, via the “premium processing” procedure.

“Boooo!!! – Premium Processing Program Suspended by USCIS,” said another tweet by Siskind, some of whose clients prefer to pay the fee for premium processing.

The signature concession removed another barrier for the many lawyers who were trying to submit tens of thousands of requests for new H-1B workers by Friday, March 20:

Today is the final day to register for the H-1B FY 2021 cap season. If you have last minute questions, visit https://t.co/aYGhKPnZIR for everything you need to know about the new process. #H1B pic.twitter.com/3C95jFpqVE

But the economic crash means the federal government must stop the inflow of H-1B workers so that sidelined American professionals can get jobs, a Florida-based American computer expert told Breibart News March 19.

“Fiona” earned two college degrees in the early 2000s after she left the real estate industry following the 2007 collapse. Since then, she has worked a series of contract jobs, most recently at a seven-month stint at an insurance company run by an imported workforce of H-1B workers from India. She said her job ended when she was forced out by Indian managers, in part, because of her excellent performance reviews. She is in her 50s, has been unemployed for several months, and fears recruiters will blackball her if she speaks on the record.

She told Breitbart News, “I’m not eligible for unemployment. So I have lived off my savings, and I’m living with my son. I’m still applying for jobs, but they’re very few and far between. I can’t relocate again because when they cut my contract job, I had to cut my lease off early, so now, my credit is bad. My lease history is bad. I can’t go and take the risks that I did before. I was getting ready to go and look for a minimum wage job until this coronavirus came here, you know. Come next month, you know what? I can’t pay my bills because I’ve gone for like eight months on my savings.”

The federal government should help Americans by stopping the inflow of visa workers, Fiona said: “Not only should they cancel the H-1B inflow, they should not renew H-1B visas. If American companies want to hire, they hire Americans. And if they say, ‘Americans don’t have the skills,’ give them the skills because we are America. And we take care of our own.”

“Americans should be outraged if they’re going to bring in another 85,000 foreigners this year,” said Dawn Collins, a former vice-president at JP Morgan Chase, who founded Protect U.S. Workers to oppose the H-1B program.  She continued, “If American graduates are being replaced by foreigners while this [economic crash] is going on … We’re in a total crisis, and the H-1B program has to be ended right now … If there is any loyalty to the country in Congress, they have to give Americans a chance, a chance … [in this] this situation where people are losing theme homes, their jobs.” 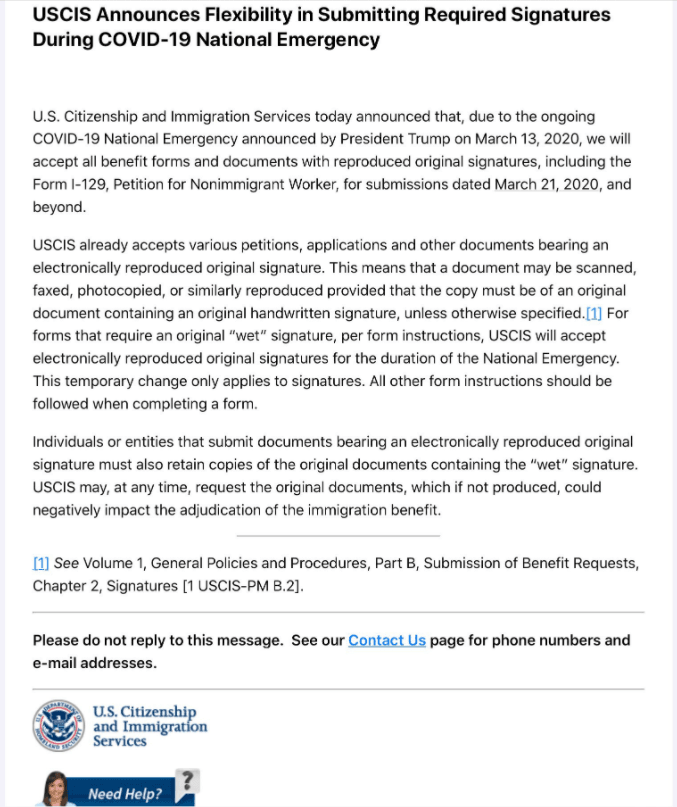 Company executives and “Human Resources” managers use the H-1Bs program to procure blocs of compliant, lower-skill foreign workers — mostly Indian or Chinese — for the many jobs sought by qualified and eager U.S. graduates and mid-career professionals.

But U.S. managers prefer them because the federal government rarely enforces routine workplace laws in H-1B workplaces. The government’s refusal to enforce the laws means the H-1Bs can be hired, fired, and abused by their bosses, most of whom are Indians who grew up in Indians’ own culture. These abuses include workplace intimidation, sexual discrimination, and unpaid overtime hours, Americans tell Breitbart News.

The government inaction in H-1B workplaces also strips American graduates of routine workplace protections, including protections against commonplace discrimination because of their nationality.

Numerous American graduates report that native-born Americans are a rarity in most Silicon Valley companies, as well as in insurance and banking industries on both coasts.

Each April, 85,000 H-1B visas are awarded to U.S. companies via a USCIS rushed application and lottery process. Another “cap-exempt” 15,000 H-1Bs are awarded throughout the year to non-profit employers at universities, research laboratories, and hospitals. The cap-exempt employers are allowed to hire as many H-1Bs as they wish.

The current head of DHS, Chad Wolf, formerly served as a lobbyist for the Indian-based outsourcing industry. The group’s mix of Indian and U.S. companies use the H-1B program to hire Indians graduates for jobs in the United States, and they split the economic gains among both countries’ companies, executives, and investors.

Breitbart News asked DHS if the agency is considering curbs on the 2020 award of H-1B visas. “No changes at this time,” a spokesman responded on March 19.

Meanwhile, business groups are trying to expand the H-1B program. For example, activists are citing the coronavirus as an excuse for Congress to allow investors to hire an unlimited number of foreign graduates for jobs in the healthcare sector. Sen. Mike Lee (R-Utah) is also pushing his S.386 bill to reward additional Indians if they take jobs from American graduates.

Trump’s failure to set curbs on the H-1B program has angered many of the swing-voting university graduates who supported him in 2016. In March 2016, after much zig-zagging, Trump declared:

The H-1B program is neither high-skilled nor immigration: these are temporary foreign workers, imported from abroad, for the explicit purpose of substituting for American workers at lower pay. I remain totally committed to eliminating rampant, widespread H-1B abuse and ending outrageous practices such as those that occurred at Disney in Florida when Americans were forced to train their foreign replacements. I will end forever the use of the H-1B as a cheap labor program, and institute an absolute requirement to hire American workers for every visa and immigration program. No exceptions.

In February 2020, a U.S. judge struck down the token H-1B curbs set by USCIS managers since Trump’s election.

Immigration reformers are calling for the cancellation of the 2020 H-1B awards amid the economic crash.

American professionals have organized to lobby against the H-1B program via the American Workers Coalition, U.S. TechWorkers, and ProUSworkers. In turn, these groups are backed up by a few sites that track the scale and location of the outsourcing industry in each legislator’s district. The sites include SAITJ.org and H1BFacts.com. “The scope of this thing is really unbelievable,” said one researcher.

The federal USCIS agency provides some data, including data about the uncapped OPT program, sometimes called the “Mini-H-1B”: