The polls look terrible. Awful. President Trump is down nationally by an average of ten points. And unlike 2016, these polls aren’t as volatile. Also unlike 2016, we’re only three weeks out and the polls are not closing. Joe Biden’s lead is expanding.

Things are a little better for Trump in the swing states. A little. Biden’s up an average of 4.8 points. He’s nudging right up against 50 percent and his lead is currently expanding.

But on this same day in 2016, Hillary was up 5.1 points in the swing states. So in the states — and it’s the states who decide who’s president — Trump is doing a little better in the polling than he was in 2016.

Still, as far as the numbers, it not only looks like Trump is about to get fired, it looks like he’s about to be humiliated by a Blue Wave of rejection that will give Democrats full control of the federal government.

So why doesn’t it feel that way?

Wanna know the difference between those years and this one? During those years everything — and I mean everything — pointed to a loss. That’s just not the case this year. Like 2016, there’s a lot of data points that make you doubt the polls.

It’s not all feelings…

Thing I can’t get over is the difference between this…

View of the crowd here in Sanford, Florida. Trump’s first rally since being infected with Covid-19. Crowd is not socially distanced and lots of people with no masks. pic.twitter.com/IRy81n5Cws

Wow! Look at the huge crowd for Biden in Pennsylvania! pic.twitter.com/rRRlyi3NQ3

Had you told me a year ago Biden would generate less enthusiasm than Hillary, I would have laughed in your face. But it’s true. The examples are endless and without exception.

Also in the department of It’s not just about the feelz, the Washington Examiner’s Byron York compiled a list of datasets that tell us the polls could once again be wrong…

It’s not a small thing that 56 percent of registered voters in a recent Gallup poll say, despite the coronavirus, they are better off now than they were when Trump took office.

When George H.W. Bush lost his reelection in 1992 — and he’s the last president to lose reelection — only 38 percent said they were better off.

What’s more, this same Gallup poll found that 49 percent of voters agree with Trump on the issues, compared to just 44 percent for Biden.

Is it possible voters are so turned off by Trump’s personal behavior, 56 percent say they are better off but only 41.6  percent will vote to reelect him?

Is it possible Trump currently has a 45 percent job approval rating but only 41.6 percent will vote to reelect him? Or…

Is it possible the hidden Trump voter is real? That Trump voters hang up or lie to pollsters?

Republicans are also winning the new voter registration battle in battleground states, and not by a slim margin. York writes:

Of the six states Trump won by less than five points in 2016, four — Arizona, Florida, North Carolina and Pennsylvania — permit voters to register by party,” NBC reported at the beginning of this month. “In all four states, voter registration trends are more robust for the GOP than four years ago.” More robust than Democrats, too. In Pennsylvania, NBC reported, Republicans added 135,619 new voters this summer while Democrats added 57,985.

It isn’t only crowd sizes and voter registration that reveal an enthusiasm gap. A recent Pew poll found that only 46 percent of Biden supports strongly support him, compared to 66 percent for Trump. That’s a 20 point spread — which is seven points higher than the 13 point gap Hillary faced in a 2016 Washington Post poll.

Imagine that. Enthusiasm for Biden is as bad or worse than it was for Hillary.

Baris’ Sept. 18 poll of the Rust Belt states — Iowa, Michigan, Ohio, Pennsylvania, Wisconsin and Minnesota — found a 16-point intensity differential: 61 percent of Trump’s voters there are extremely enthusiastic about voting for him, compared to 45 percent of Biden’s supporters.

Democrats argue the enthusiasm is not to vote for Biden but to vote against Trump. Maybe so. Seemed to be a lot energy against Trump in 2016, too.

Never in history have I come across a politician, much less a president, who is as incapable of hiding his emotions as Trump. The guy’s an open book. You always know, in any given moment, exactly how he feels about everything, most especially if he’s winning or losing, and with about three weeks to go, Trump is having a grand time.

He’s in a terrific mood. Having a blast. 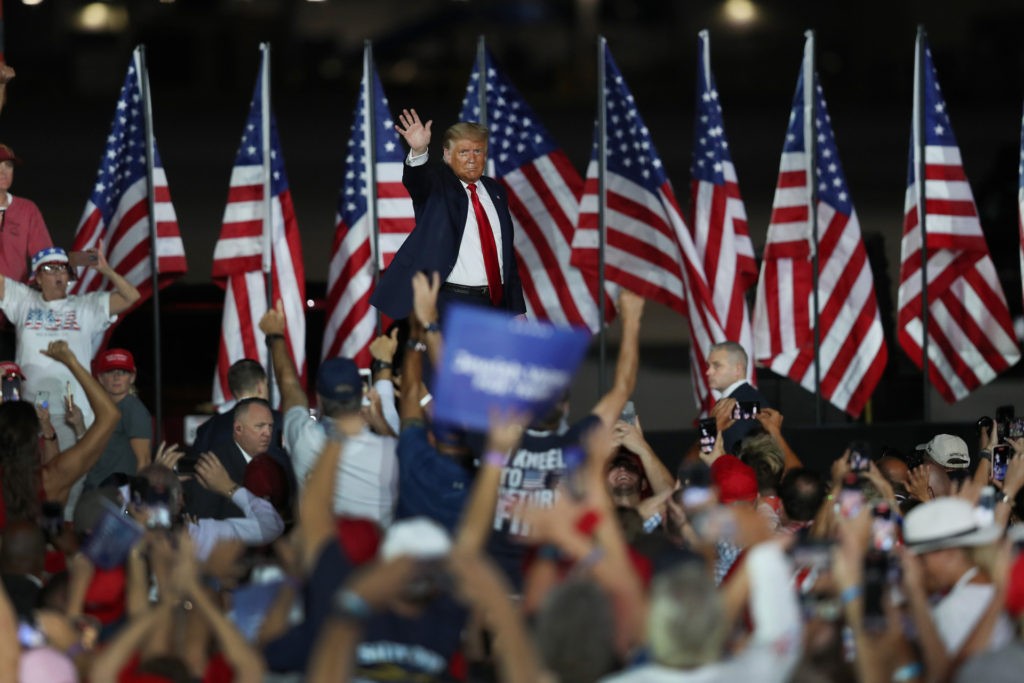 President Donald Trump waves to the crowd as he leaves after speaking during a campaign event at the Orlando Sanford International Airport on October 12, 2020 in Sanford, Florida. Trump was holding his first campaign rally since his coronavirus diagnosis as he continues to campaign against Democratic presidential candidate Joe Biden. (Photo by Joe Raedle/Getty Images)

Biden is the guy acting like a loser. He’s grumpy, short-tempered… That could just because he’s 198-years-old and his mind is going and he has to Skype with people like Kamala Harris.

Wonder what his internal polls say?