A young man with his girlfriend who fought off an attack by rioters Saturday after the Million MAGA March in Washington, D.C., described to Breitbart News on Monday what happened–and urged Trump supporters not to be afraid.

Charles Downs, 26, described to Breitbart News what happened before and during the attack, video of which showed him in a red Trump sweatshirt shielding his girlfriend from rioters and guiding her to safety.

“Obviously, she was my number one priority the entire time,” he said of his girlfriend, 25.

You can hear see and hear the female Trump Supporter cry in fear pic.twitter.com/No1QDp4KLd

He described what happened:

It was really crazy. One of my friends was in town and he had a hotel room [at Hotel Harrington above Harry’s Restaurant]. We were just at [the hotel] on the ninth floor washing up and then we left Harry’s and started walking out to go home because we were there for a few hours. The D.C. Police had sidewalks blocked so you could only walk in a specific way. I saw that there were a few stories written about this how they blocked a few roads, and the only roads they didn’t block led the protesters into the counter-protesters. That’s kind of what happened with us, the roads were blocked and we were kind of just walking … trying to find an exit where the street was normal so we could call a cab or get an Uber home.

So we come to this street and the protesters were playing their drums. I work around politics and I’m in D.C. all the time and there’s always protesters playing their drums. That’s their right, that’s America. That’s what makes it free, free speech and protesting. So, there wasn’t anything out of the ordinary, we were just walking.

About halfway down the street, all of a sudden, these people come up. I don’t think these people were from Washington, D.C., there is no way, because the very first thing they do is they separated my girlfriend and I. My girlfriend has a Washington Nationals hat on and who from D.C. would rip off a Nationals hat and stomp on it? It just doesn’t make sense.

So they do that, and they were trying to get me to the ground really hard. They kept kicking, like I have rashes up and down the back of my legs, so they were trying to kick me, and they kept kicking my mid-section. I kept telling people, thank God I swam for 18 years, if it hadn’t been for those muscles, I would have fallen. I think it was kind of intimidating that I didn’t fall, so I was able to get like a split second to jump back over to my girlfriend and grab her and started walking and that’s when the video starts. 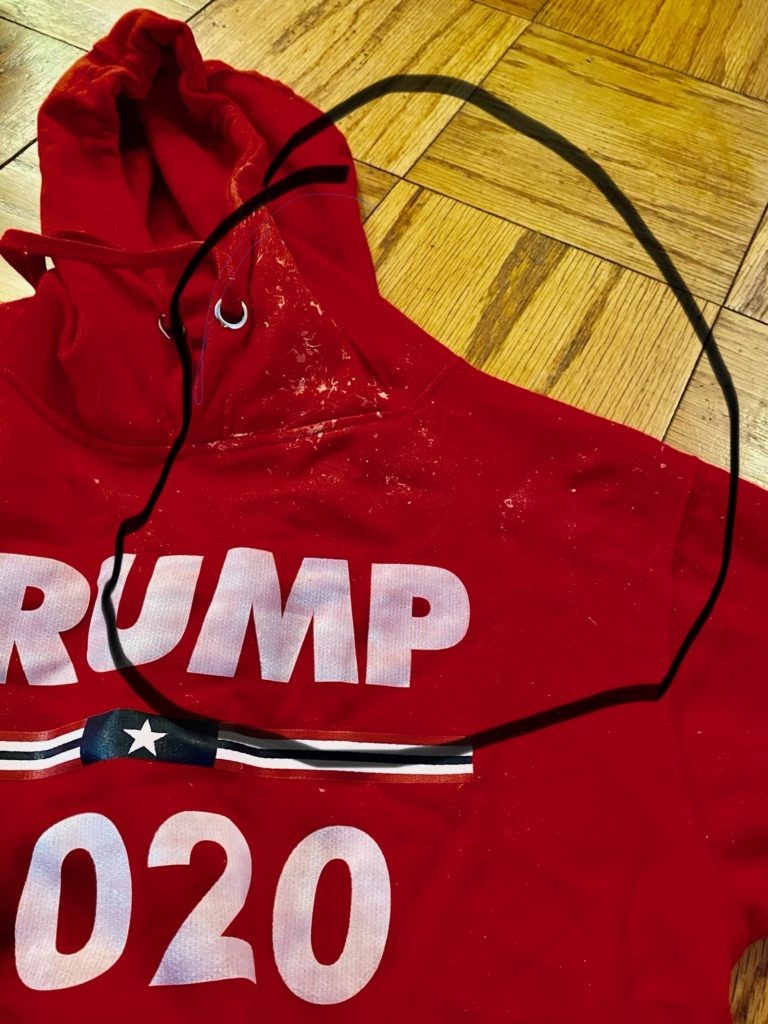 He talked about why he gave cameras the thumbs up sign as they made it to safety — a message to fellow Trump supporters.

“I don’t want the world to be afraid of these people because at such an important time in our country, people should be marching peacefully and that’s what makes America so great – you can say your political beliefs, as long as you do it peacefully and respectfully, just like people were doing [that day],” he said.

He said he also knew once he saw the cameras that they were going to be safe.

“It was really scary before the cameras became turned on, cause I was like, ‘Are we going to make it out of here?’ These people were really nuts, they kept hitting as hard as they could,” he said.

“I was just thinking, I have to make sure that my girlfriend is OK, I got to protect her. Take all her blows or whatever and get her out of there. That was my number one thought,” he said.

He said his girlfriend is OK now, and that she is now “more fired up than ever.”

He said they are both sore but will be fine in a few days. He said the police never contacted them after the attack, but he blames D.C. Mayor Muriel Bowser, not the police, for not keeping them safe.

He said the attackers were strategic — waiting until they got further away from police near the hotel to attack them.

“No one from BLM or Antifa intervened with us until we were halfway down the street. The first point we took to veer away from the cops, at the
end of the street to leave the street, that’s when they got vicious,” he said.

He said he had never experienced anything like that in D.C. before, and found the attack odd.

“I’ve seen the protesters around BLM Plaza and stuff all the time, people going in and out of the White House complex and stuff, and they don’t just attack out of nowhere. I have never seen that before,” he said.

He said he was happy to speak up and hopes other Trump supporters do, too:

This is a time when if you believe in free speech and you believe in transparency, this is a time to speak up. Don’t be afraid to speak up. Don’t be afraid to call your elected officials and talk about transparency with all that’s going on right now. And don’t be afraid to go marching in the streets — obviously peacefully — if you felt that’s what you should do because this is America and we got to fight to save America’s values or else what happened to me could happen to someone in suburban Atlanta or suburban Phoenix or anywhere in the States. That’s the scary part, this is supposed to be the capital. It’s happening in the United States Capital!