Noem’s interview came during a campaign stop here in downtown Valdosta at Jessie’s Restaurant after she met with GOP voters as part of an effort to turn out the vote for Sens. David Perdue (R-GA) and Kelly Loeffler (R-GA) in Tuesday’s upcoming runoffs. The Wednesday interview, which aired on Breitbart News Saturday on SiriusXM 125 the Patriot Channel, came after she spoke and took questions from local GOP voters gathered in the restaurant. One of Noem’s daughters joined her for the event. Perdue and Loeffler face Democrats Jon Ossoff and Rev. Raphael Warnock respectively in Tuesday’s runoff elections. 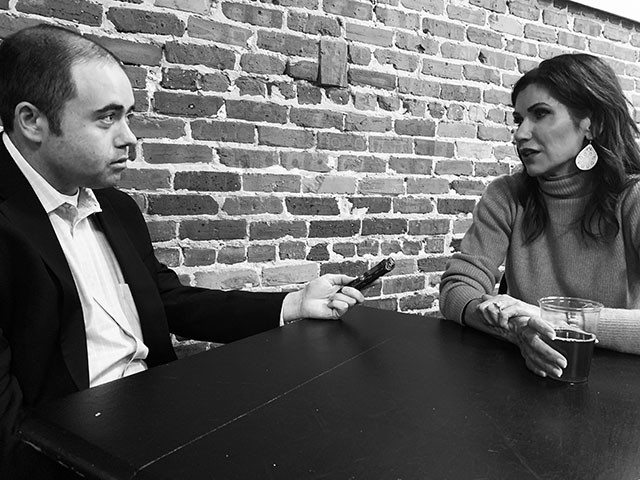 “Most of the mothers in this country are juggling a lot of different responsibilities,” Noem told Breitbart News when asked to put in context what is at stake for mothers in Georgia and nationally in this race. “They have a lot on their plate. Many of them are working, many of them are taking care of elderly parents, many of them are paying the bills, and many of them are making healthcare decisions—all of those are impacted by who we elect and who we put into the U.S. Senate. David and Kelly have fought to make sure we keep more money in our pockets. If people vote for Warnock and Ossoff to go to Washington, DC, they will raise taxes. They have endorsed the Green New Deal which means four to five years from now we will have $4 to $5 a gallon gasoline. That will make budgets even tighter, and people will have less money. Our food will be more expensive in the grocery stores. Healthcare decisions would be made by the government. These are very clear facts that Warnock and Ossoff have embraced and said they will do openly and publicly. They also have a fundamentally different viewpoint of this country, and Warnock especially has had the opportunity to denounce Marxism and socialism and he did not do that. So, that’s the real life choices that I think women and moms are dealing with here in this election cycle, and they need to recognize not only does it change the direction this country is going but it will change their everyday decisions and what resources they have to take care of their families even six months to a year from now.”

South Georgia is a long way from South Dakota, and Noem told Breitbart News she made the trip down here to explain to voters how serious this election is and what is on the line for them—and for the people of South Dakota and nationally.

“I came to Georgia today because leadership has consequences and this is a big election on Tuesday,” Noem said. “Who Georgia elects to put in the U.S. Senate will have consequences. What gets decided here will impact the people of South Dakota and will impact the country. So I came here to remind people about the differences in these candidates and asking them to vote for David and Kelly. They have proven themselves to the people of Georgia and that they will get up every morning and fight for communities, for families, to protect our freedoms and make sure America stays as special as she has always been. What concerns me is all the emotion in the race and the anger and the division, and I think people are getting distracted by that and not focusing really on the facts, so what I’m asking people here today at every stop I’ve been at is to do more. Go out and talk to people who disagree with them and have an honest conversation free of emotion, free of anger. Listen to them and then give them the facts about how different these candidates are and the different viewpoints they have for this country.”

Noem also lit into both of the Democrat candidates, each of whom has deeply troubling revelations emerging about their backgrounds. Warnock, a radical leftist, has made a number of highly offensive and radical comments over the years including praising Rev. Jeremiah Wright and Louis Farrakhan and his church hosting Cuban dictator Fidel Castro. His background also includes evidence of child abuse at a church camp he ran, and police video that recently emerged from a domestic disturbance with his wife.

“Our history tells our story, especially if we don’t acknowledge it or talk about a change in viewpoint and be honest about where we are today. It really tells you about what you’re dealing with in the future, and I think that’s the concern with Warnock,” Noem said. “He’s had all these public declarations for embracing socialism and embracing Marxism, and he will not say he’s had a change of heart. He will not say that he believes he was wrong. He will not say in all of these personal issues he’s had in the past that he’s changed his ways or even acknowledge that he is on a different path. So that’s some very clear testimony to people across the state, that he is doing what politicians do best, and that is putting a good spin on the kind of person he really is. He’s never held public office before so when he gets to Washington, DC, he’s not going to even necessarily know how to be a U.S. senator and will clearly follow the direction of his leader. His leader is going to be Schumer. That’s concerning to us that we would be putting somebody there who is going to be following what Pelosi’s agenda is, and what Schumer’s agenda is and be falling right in line with what Kamala Harris would want to see in the White House. That is not true with David or with Kelly. Kelly is the American dream—she grew up on a farm, like I did, she ran businesses, she’s been successful, and she’s gone there and proven to us with her votes that she’s going to continue to give moms and women the opportunity to create a future for their kids and grandkids like we all enjoyed. So you look at the past history of who these people are and if they have proven to you that they are the kind of person who you can get behind and the only person who’s done that in this race is Kelly.”

As for Ossoff, Noem said that given his ties to the Chinese Communist Party—ties he originally did not disclose but has since revealed in financial disclosure documents—it makes no sense for Georgians to vote for him especially given the fact that the coronavirus pandemic originated in Wuhan, China.

“It doesn’t make any sense to me,” Noem said. “We all know that China is not our friend. We all know that they are out to destroy this country. Anybody who has done business with them in the way that he has and then tried to cover it up and to keep the truth from the public should not be trusted with a seat in the U.S. Senate. That’s just factual and the vast majority of people understand that. He clearly does not have America’s future in mind when he does business dealings like that and when he is trying to keep the truth from the people.”