First Lady Jill Biden on Thursday gave the U.K. Prime Minister Boris Johnson’s son Wilfred a copy of the picture book she wrote about the president’s early years and his life among young children. 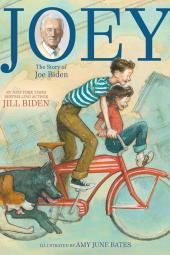 Dr Biden, 70, handed the gift to Carrie Johnson, the one-year-old’s mother, as they walked along the beachfront at Carbis Bay, Cornwall, on Thursday, according to the Daily Mail.

Publisher’s Weekly describes the tome as an “anecedotal portrait” of the man who grew up in Scranton, Pennsylvania, looking to his “early years spotlights his competitiveness and risk-taking…his role as a peacemaker, devoted brother, and defender of bullied peers.”

The Weekly goes on to praise the revelations about Biden at high school, “when he became a star athlete and class president, paved the way for leadership roles in college and beyond.”

Jill Biden’s salute to her husband is not the first time his life has been chronicled, or that of his immediate family.

In 2017 Joe Biden published  Promise Me, Dad: A Year of Hope, Hardship, and Purpose. In it he shared his experience with the death of his son, Beau, and his decision not to seek the presidency in 2016.

More recently the president’s son Hunter Biden pushed his life story into public view with the publication of his biography Beautiful Things: A Memoir.

Sales of the confessional crashed after just one week despite a relentless public relations push, positive media coverage, an early surge, and the author’s tour with a friendly press, as Breitbart News reported.

The memoir received overall positive reviews from corporate media critics including CNN’s Brian Stelter who applauded it as “breathtaking” and “extraordinary” in its “honesty” for tackling the scope of the author’s confessed addiction to crack-cocaine and alcohol.

Stelter cast aside questions of a “probe” into Hunter Biden’s laptop before providing his professional analysis on his own literary prowess. “I’ll tell you what, I’ve read a lot of memoirs, I’ve never read a memoir like this one before,” Stelter excitedly gushed.