During a press conference this week, coordinated by the pro-mass migration group American Business Immigration Coalition (ABIC), Gregory urged members of Congress to pass an amnesty for the roughly 11 to 22 million illegal aliens living in the U.S.

“Catholic social teaching upholds the principle that every person has the right to live in his or her own homeland in security and dignity,” Gregory said. “However, when loss of work forces migration, we must welcome them, protect them and share our abundance with them.”

“Standing in solidarity with our migrant brothers and sisters means once again raising the question, will we care for our neighbor? After years of delay, the 117th Congress now has an opportunity to be courageous by addressing immigration in a comprehensive and productive way,” Gregory continued. 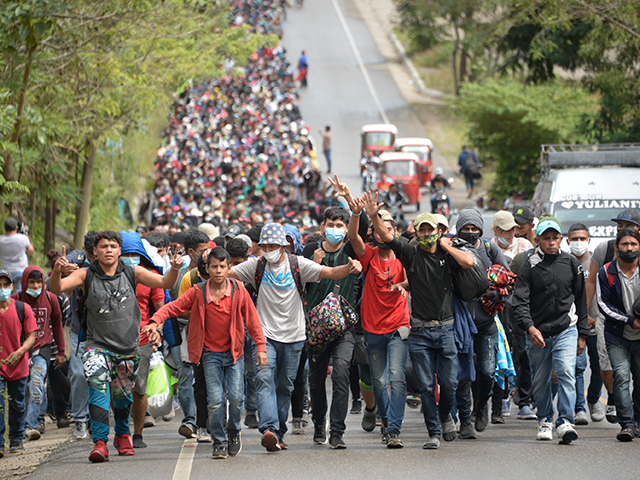 Honduran migrants, part of a caravan heading to the United States, walk along a road in Camotan, Guatemala on January 16, 2021. (Photo by JOHAN ORDONEZ/AFP via Getty Images)

The remarks come as senate Democrats are attempting to slip an expansive amnesty for illegal aliens into a budget via the little-known filibuster-proof reconciliation process, which would only require 51 votes.

This week, Senate Budget Committee Chairman Bernie Sanders (I-VT) said Democrats are going to “do the best that we can” in terms of slipping an amnesty through reconciliation.

The U.S. Conference of Catholic Bishops, which avidly supports mass migration, is also lobbying Congress to pass an amnesty.

“All Dreamers, not just those receiving DACA, deserve the opportunity to achieve their God-given potential in the only country most of them have ever known,” Bishop Mario E. Dorsonville said in a statement this week. “This is not only a matter of human dignity but also family unity, considering the 250,000 U.S.-citizen children with Dreamers as parents.”

“My brother bishops and I urge the Senate to join the House of Representatives in passing legislation that would provide legal status and a path to citizenship for all Dreamers,” Dorsonville continued.

Already, current immigration levels put downward pressure on U.S. wages while redistributing about $500 billion in wealth away from America’s working and middle class and towards employers and new arrivals, research by the National Academies of Sciences, Engineering and Medicine has found.