Australia has now resorted to monitoring alcohol consumption and in some cases confiscating drinks in areas under strict lockdown.

According to news.com.au, health authorities in New South Wales (NSW), Australia’s most populous state, have limited the number of alcoholic beverages people can drink each day in “NSW Health controlled buildings” as part of an effort to “ensure the safety of health staff and residents.”

Residents in apartment blocks locked-down by NSW Health are having their alcohol deliveries policed as part of a policy to limit the number of drinks being consumed each day.

Mission Australia’s Common Ground building in Camperdown is the latest building where occupants are subjected to the harsh rules.

Residents are allowed to receive a ration of one of the following: six beers or pre-mixed drinks, one bottle of wine, or one 375ml bottle of spirits.

Excess alcohol is being confiscated until lockdown rules are lifted.

Residents can consult with a clinician if they think they need more than the allowed limit.

Residents in Sydney complained authorites have often searched “care packages sent by friends and relatives” to check for violations of the order.

“They are searching all bags and things coming into the building … They confiscated a series of gifts. So things like bottles of spirits, we weren’t allowed to have those and we still (aren’t),” resident Robin Elhaj said. 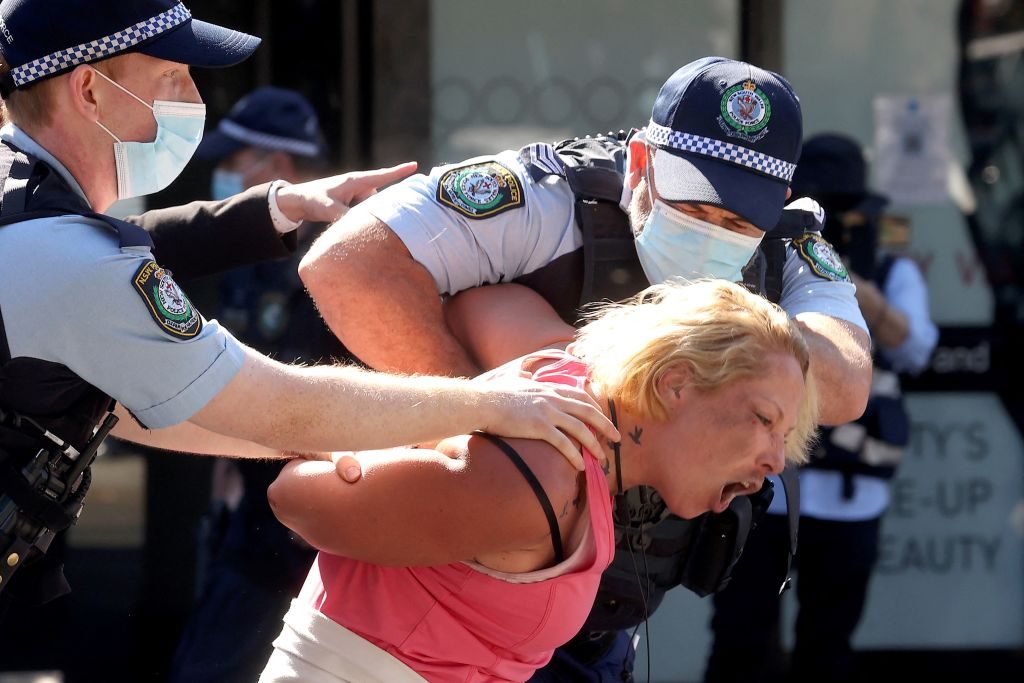 NSW Police officers detain a protestor in Sydney on August 21, 2021, following calls for an anti-lockdown protest rally amid a fast-spreading coronavirus outbreak. (DAVID GRAY/AFP via Getty)

Whether or not NSW Health has the authority to limit alcohol consumption for people being quarantined in their private residences has been called into question. A NSW Police spokeswoman denied reports officers are confiscating alcohol from residents.

“In all residential lockdown locations, NSW Police are there to ensure compliance with the Public Health Orders and assist NSW Health if required,” the spokeswoman said. 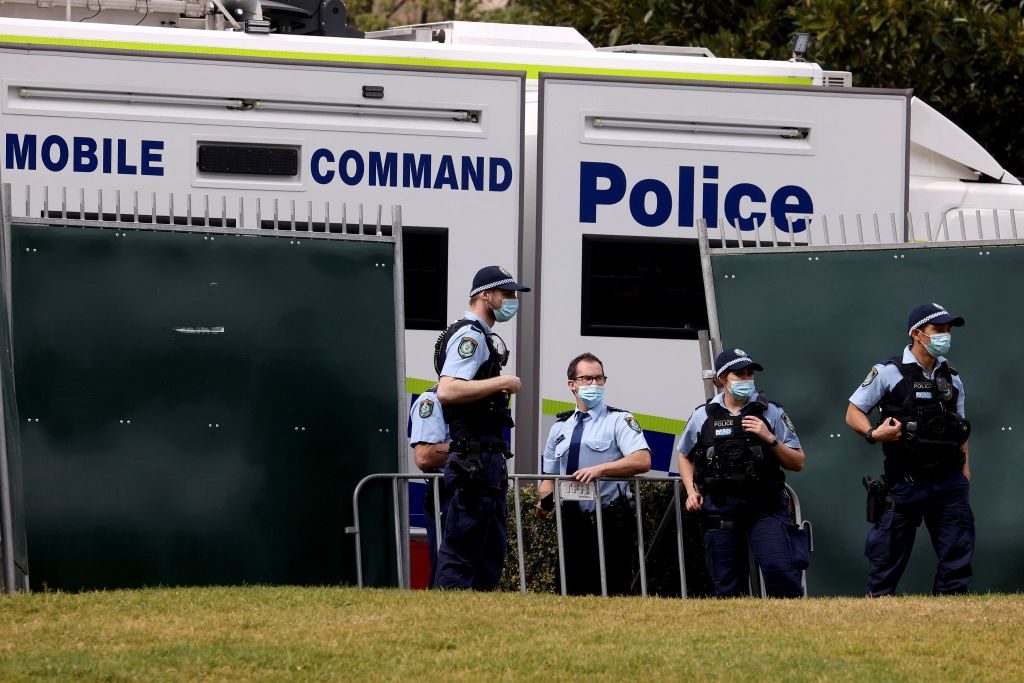 NSW Police officers keep watch from a mobile command unit in Sydney on August 21, 2021, as an anti-lockdown protest rally goes ahead in Australia’s biggest city. (DAVID GRAY/AFP via Getty)

Australia’s strict lockdown policy, which forbids citizens from leaving the country, has come under intense scrutiny in recent weeks. Writing in The Atlantic, Conor Friedersdorf argued “Australia traded away too much liberty.”

Australia is undoubtedly a democracy, with multiple political parties, regular elections, and the peaceful transfer of power. But if a country indefinitely forbids its own citizens from leaving its borders, strands tens of thousands of its citizens abroad, puts strict rules on intrastate travel, prohibits citizens from leaving home without an excuse from an official government list, mandates masks even when people are outdoors and socially distanced, deploys the military to enforce those rules, bans protest, and arrests and fines dissenters, is that country still a liberal democracy?

Meanwhile, Australia’s neighbor New Zealand has already vowed to close its borders for the remainder of the year, continuing the country’s embrace of a total isolationist strategy in its fight against the coronavirus. In August, New Zealand Prime Minister Jacinda Ardern said the country’s borders “will never be the same after” the pandemic, likening the situation to the 9/11 attacks.

“Just like after 9/11, the border will never be the same after Covid … things can change, but that doesn’t mean we can’t adapt to them in a way that eventually feels normal again,” said Ardern.