Sen. James Lankford (R-OK) sent a letter on Thursday to the Archivist for the United States demanding the National Archives and Records Administration (NARA) stop putting a “Harmful Language Alert” on all searchable government documents on its website.

In his letter to David S. Ferriero, Lankford is trying to get answers from the NARA on their “ideologically-motivated task force report” and demanding the alert to be immediately removed from the website. Some of the documents affected are the U.S. Constitution, the Declaration of Independence, and the Bill of Rights.

“I am deeply concerned with the National Archives and Records Administration’s (NARA) blanket application of a ‘Harmful Language Alert,’ to all documents in the Archives Catalog,” Lankford noted in the letter. “Most disturbing is use of the alert for our nation’s founding documents, including the Constitution, Declaration of Independence, and the Bill of Rights.” 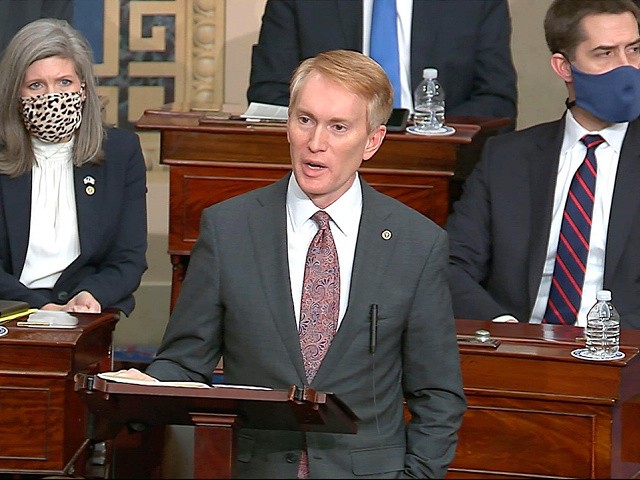 In this image from video, Sen. Lankford speaks as the Senate reconvenes in U.S. Capitol on January 6, 2021. (Senate Television via AP)

The alerts “should be removed immediately,” he declared. Lankford called the alerts “politically-charged” noted that they go “beyond the role of NARA.”

The senator included the NARA’s statement on “Potentially Harmful Content”:

The Catalog and web pages contain some content that may be harmful or difficult to view. NARA’s records span the history of the United States, and it is our charge to preserve and make available these historical records. As a result, some of the materials presented here may reflect outdated, biased, offensive, and possibly violent views and opinions. In addition, some of the materials may relate to violent or graphic events and are preserved for their historical significance.

“While our nation undoubtedly has stains on its history, we have, from our founding, created the most free and diverse society on earth. Nevertheless, the people of the United States have continued their mission of forming a more perfect union,” the senator explained.

“As a nation, we should take pride in our founding documents, not stipulate them as if we are ashamed of the very freedoms that provide individuals in our nation,” he continued.