The origins of Columbus Day — commemorating Italian explorer Christopher Columbus — stem from efforts to combat racism against Italian immigrants, who endured everything from racial epithets to lynch mobs when they first arrived to the United States. Today, in the era of wokeness, Italian Americans face a new type of mob, one that seeks to ban the federal holiday celebrating Italian heritage.

Although the first recorded celebration of Columbus Day in the United States was in 1792, the holiday came to national prominence over a century later, when President Benjamin Harrison issued a proclamation on October 12, 1892, encouraging Americans to mark the day in honor of the Italian explorer.

Although Harrison’s proclamation was made on the 400th anniversary of Columbus’ voyage to the New World, his aim in recognizing the holiday in 1892 had less to do with honoring the Italian explorer and more to do with encouraging Americans to be more accepting of Italian immigrants. That’s because the 1892 proclamation was made in the wake of one of the worst episodes of racial violence in American history — the mass lynching of Italian Americans in New Orleans in 1891 that claimed the lives of eleven Italian immigrants. 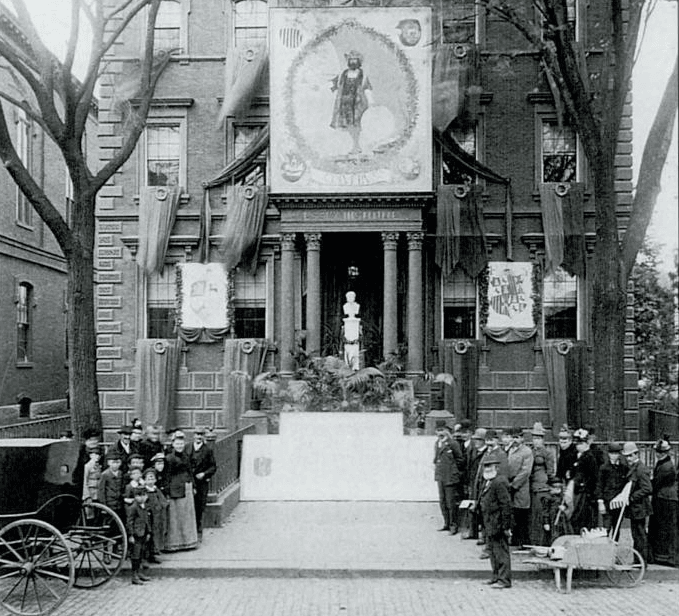 A Columbus Day celebration in Salem, Massachusetts, in 1892. (Wikimedia Commons)

The violence in New Orleans was years in the making. Hatred against the Italian newcomers was openly espoused by the newspapers of the day. For example, in 1882 the New York Times ran an editorial with the headline, “Our Future Citizens,” in which the Times’ editorial board stated, “There has never been since New York was founded so low and ignorant a class among the immigrants who poured in here as the Southern Italians who have been crowding our docks during the past year.”

The Times editors went on to express their disgust that “utterly unfit — ragged, filthy, and verminous” Italian immigrant children would “be placed in the public primary schools among the decent children of American mechanics.”

In 1887, the same New York Times would write approvingly about the lynching in Mississippi of a man they referred to as “Dago Joe,” using the racial slur (“dago”) that was commonly directed at Italians. An Italian immigrant family at Ellis Island, circa 1910. (Library of Congress)

With anti-Italian sentiment running rampant — and Italian immigrants taking jobs in Louisiana fields to replace the recently emancipated slaves — the environment became ripe for conflict in New Orleans, where nearly 300,000 Italian immigrants would settle between 1884 to 1924.

In the fall of 1890, New Orleans police chief David Hennessy was assassinated. Later, a witness claimed to have heard the police chief say that “dagoes” had shot him. In response, the police rounded up hundreds of Italians and eventually charged nine of them with complicity in Hennessy’s murder. However, when their trial resulted in six non-guilty verdicts and three mistrials, the public was outraged, and — egged on by the local press — they directed their fury at Italians in general.

What followed on March 14, 1891, was the largest mass lynching in American history, as History.com explained:

[T]housands of angry residents gathered near the jail. Impassioned speakers whipped the mob into a frenzy, painting Italian immigrants as criminals who needed to be driven out of the city. Finally, the mob broke into the city’s arsenal, grabbing guns and ammunition. As they ran toward the prison, they shouted, “We want the Dagoes!”

A smaller group of armed men stormed the prison, grabbing not just the men who had been acquitted or given a mistrial, but several who had not been tried or accused in the crimes. Shots rang out—hundreds of them. Eleven men’s bodies were riddled with bullets and torn apart by the crowd.

Outside the jail, the larger mob cheered as the mutilated bodies were displayed. Some corpses were hung; what remained of others were torn apart and plundered for souvenirs.

The next day, the New York Times celebrated the mass lynchings in New Orleans with a headline that read, “Chief Hennessy Avenged: Eleven of his Italian Assassins Lynched by a Mob.”

“These sneaking and cowardly Sicilians, the descendants of bandits and assassins, who have transported to this country the lawless passions, the cutthroat practices, and the oath-bound societies of their native country, are to us a pest without mitigations,” the Times editors wrote. 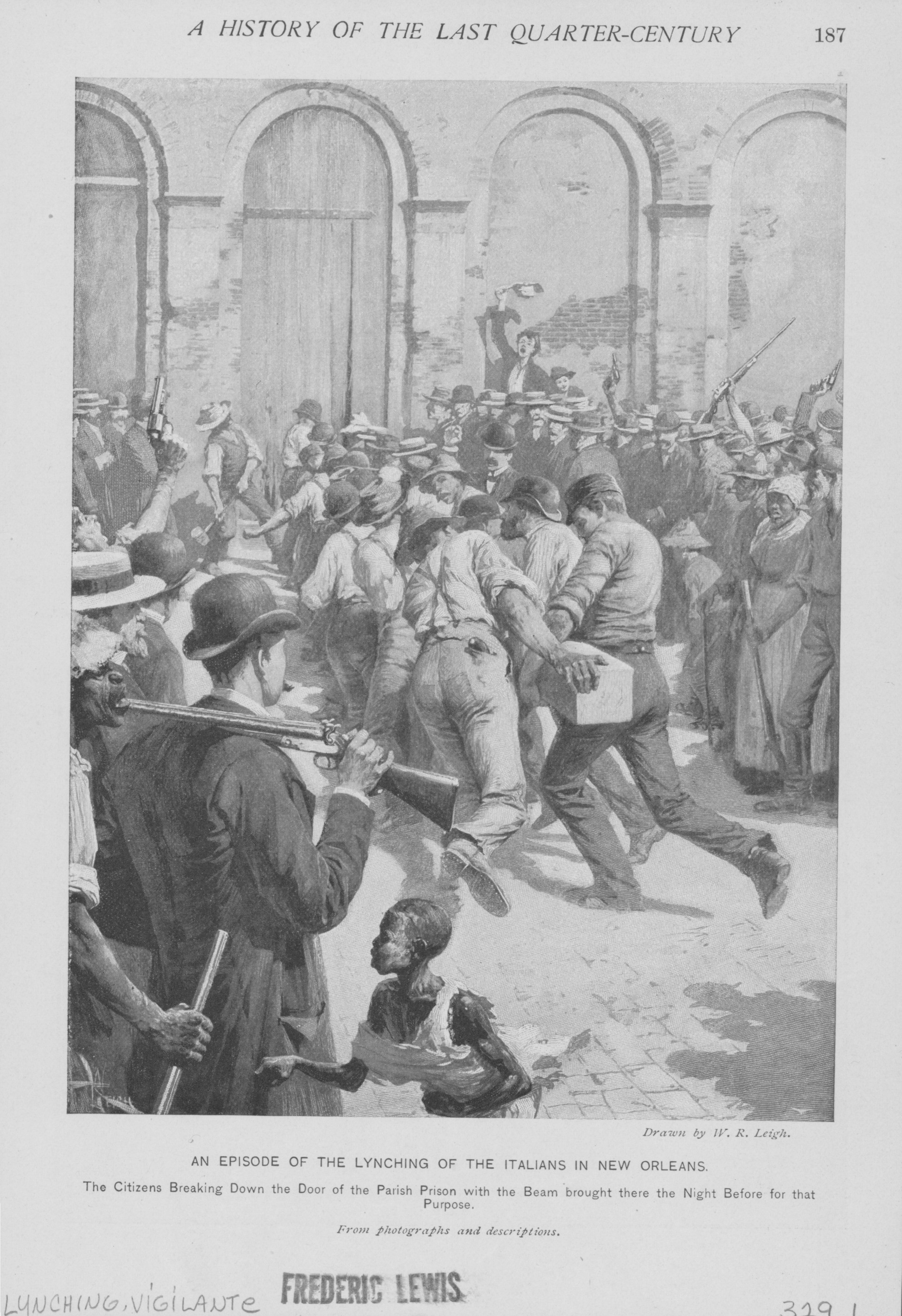 Sketch of the New Orleans mob, incensed by the acquittal of Italians indicted in the murder the police chief, breaking into the prison and lynching the immigrants on March 14, 1891. (Frederic Lewis/Archive Photos/Getty Images)

After that, the Italian government broke off diplomatic relations with the United States, and tensions were only assuaged after the U.S. government paid an indemnity to the Italians. Later, in his 1891 State of the Union address, President Harrison called on Congress to protect foreign nationals from mob violence.

After Harrison’s one-time national Columbus Day proclamation in 1892, President Franklin D. Roosevelt later proclaimed Columbus Day an official U.S. holiday in 1937. Since 1971, Columbus Day has been commemorated in the U.S. on the second Monday in October.

Harrison’s 1892 proclamation opened the door for Italian Americans to include themselves into “the American origin story,” and over the decades, the holiday gave Italian Americans “a formative role in the nation-building narrative,” New York Times editor Brent Staples wrote in a 2019. 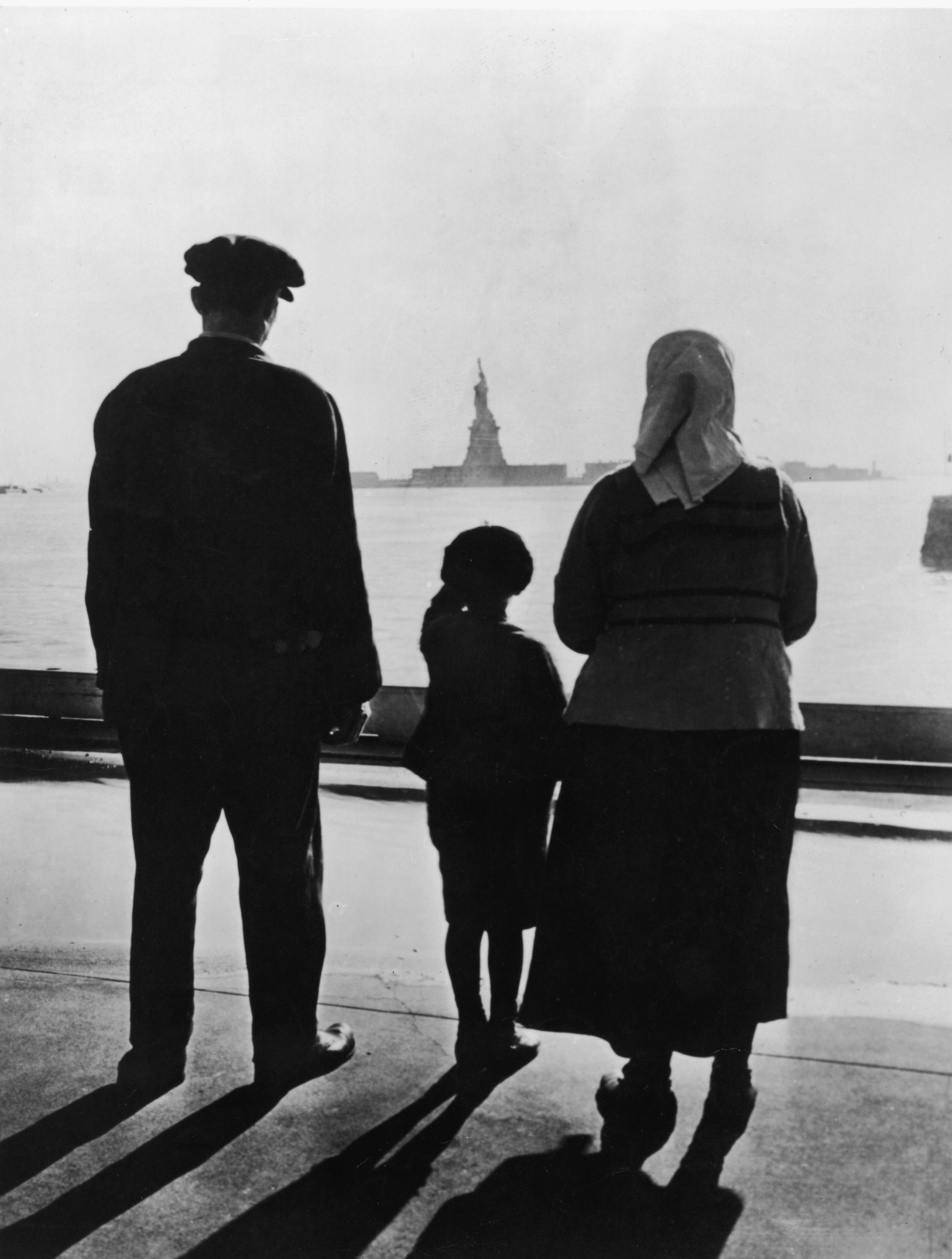 Rear view of an immigrant family on Ellis Island looking across New York Harbor at the Statue of Liberty. (Photo by FPG/Getty Images) 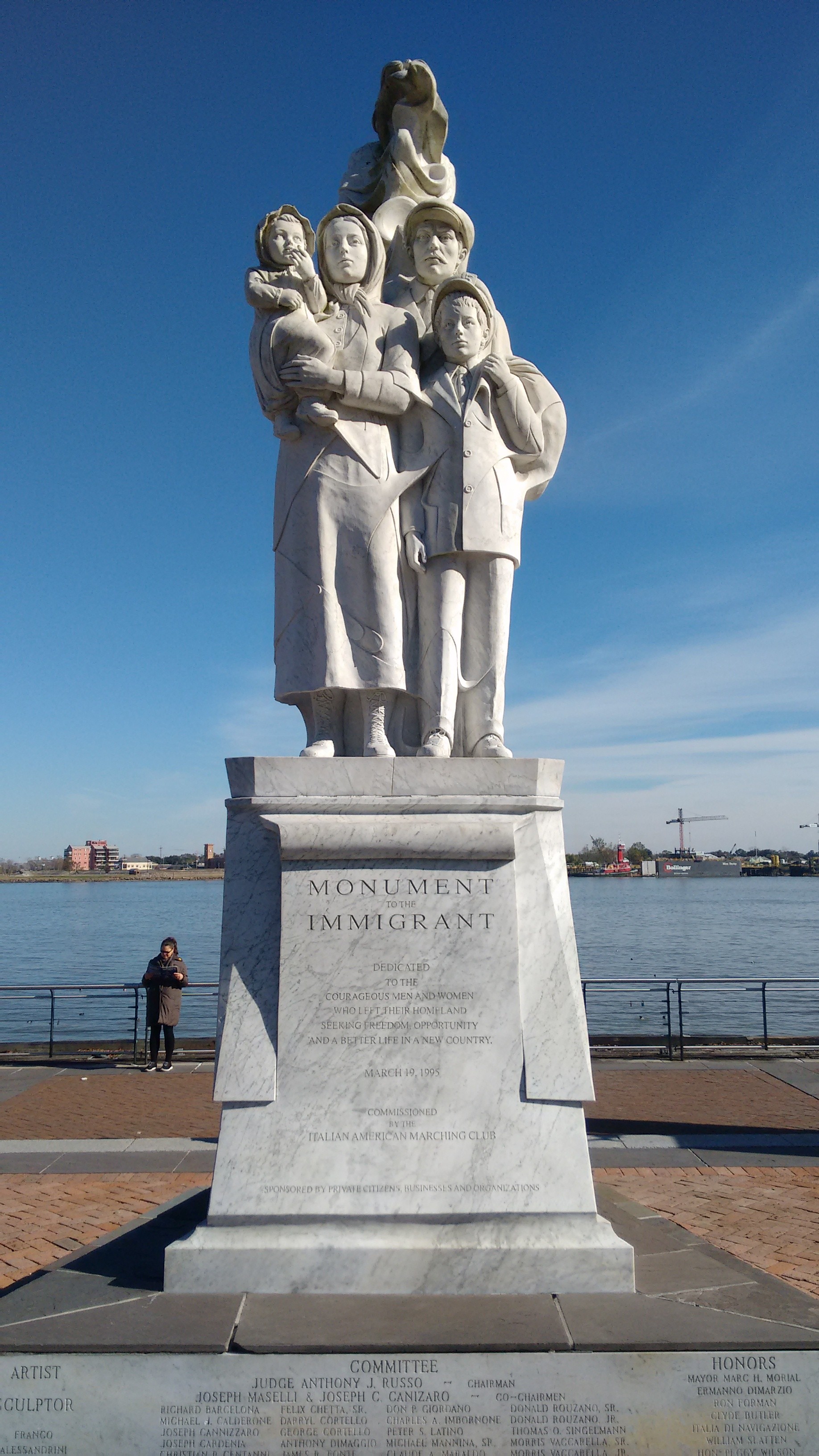 The “Monument to the Immigrant” statue commissioned by the Italian American Marching Club of New Orleans, stands along the Mississippi River in Woldenberg Park in New Orleans. (Photo by Jon Gudorf Photography/Flickr)

And since immigrating to the United States, Italians did, in fact, go on to make countless contributions to America.

In New York City alone, Italian immigrants “went to work on the growing city’s municipal works projects, digging canals, laying paving and gas lines, building bridges, and tunneling out the New York subway system. In 1890, nearly 90 percent of the laborers in New York’s Department of Public Works were Italian immigrants,” according to the Library of Congress.

And six Italian immigrants — known as the Piccirilli Brothers — were also responsible for carving out “many of the most significant marble sculptures in the United States,” notes the New York Public Library.

Among those significant sculptures is the iconic statue of Lincoln in the Lincoln Memorial in Washington, D.C.

The New York Public Library adds that the Piccirilli Brothers also carved the lions for the Library, as well as the six allegorical figures representing History, Romance, Religion, Poetry, Drama, and Philosophy that adorn the Library’s Fifth Avenue facade.

And in Cleveland, Ohio, the towering art deco statues known as the “Guardians of Traffic” — which serve as icons for the city — were carved in large part by Italian immigrants, one of whom was this reporter’s great great uncle, sculptor Domenicantonio Mastrangelo. 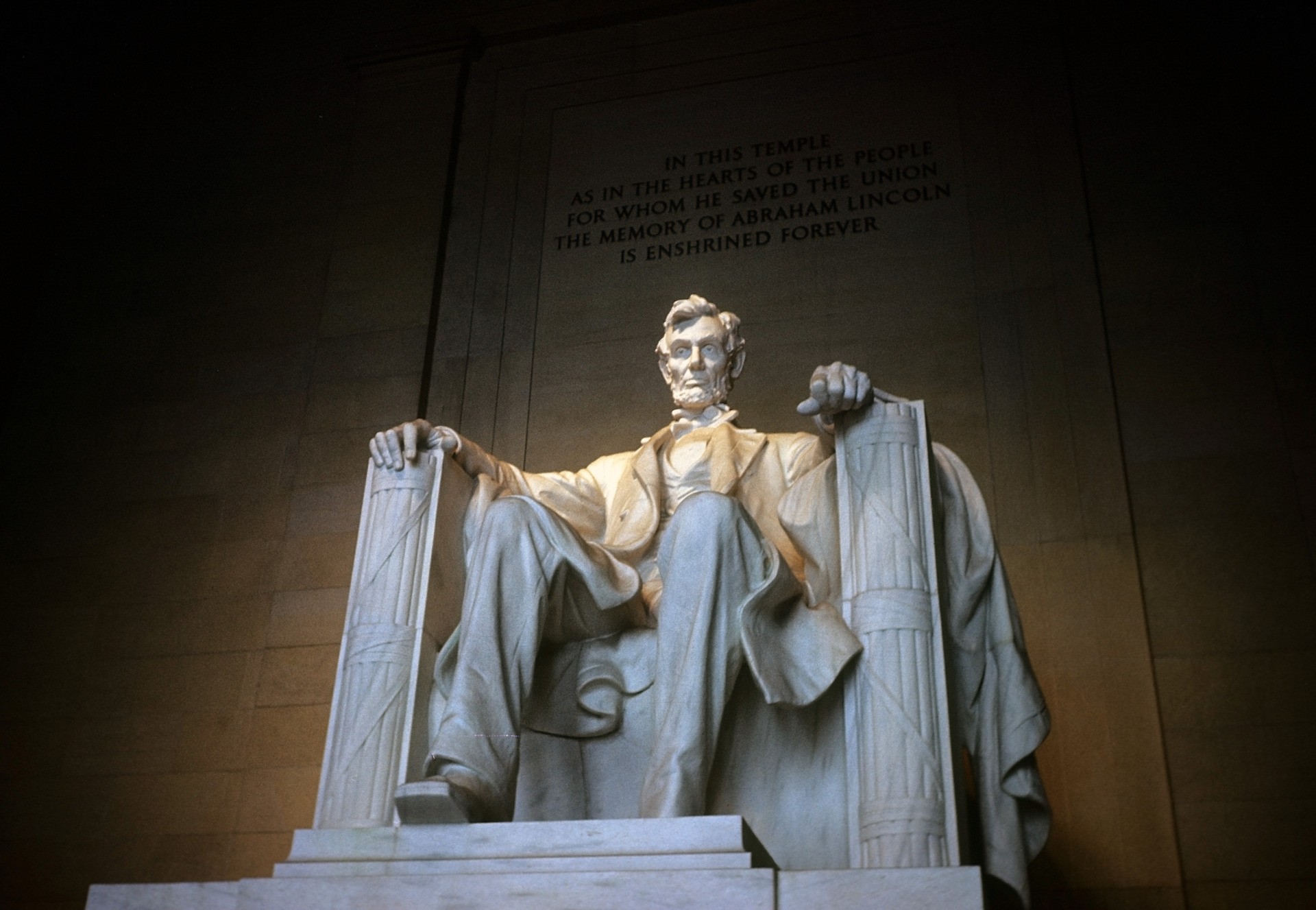 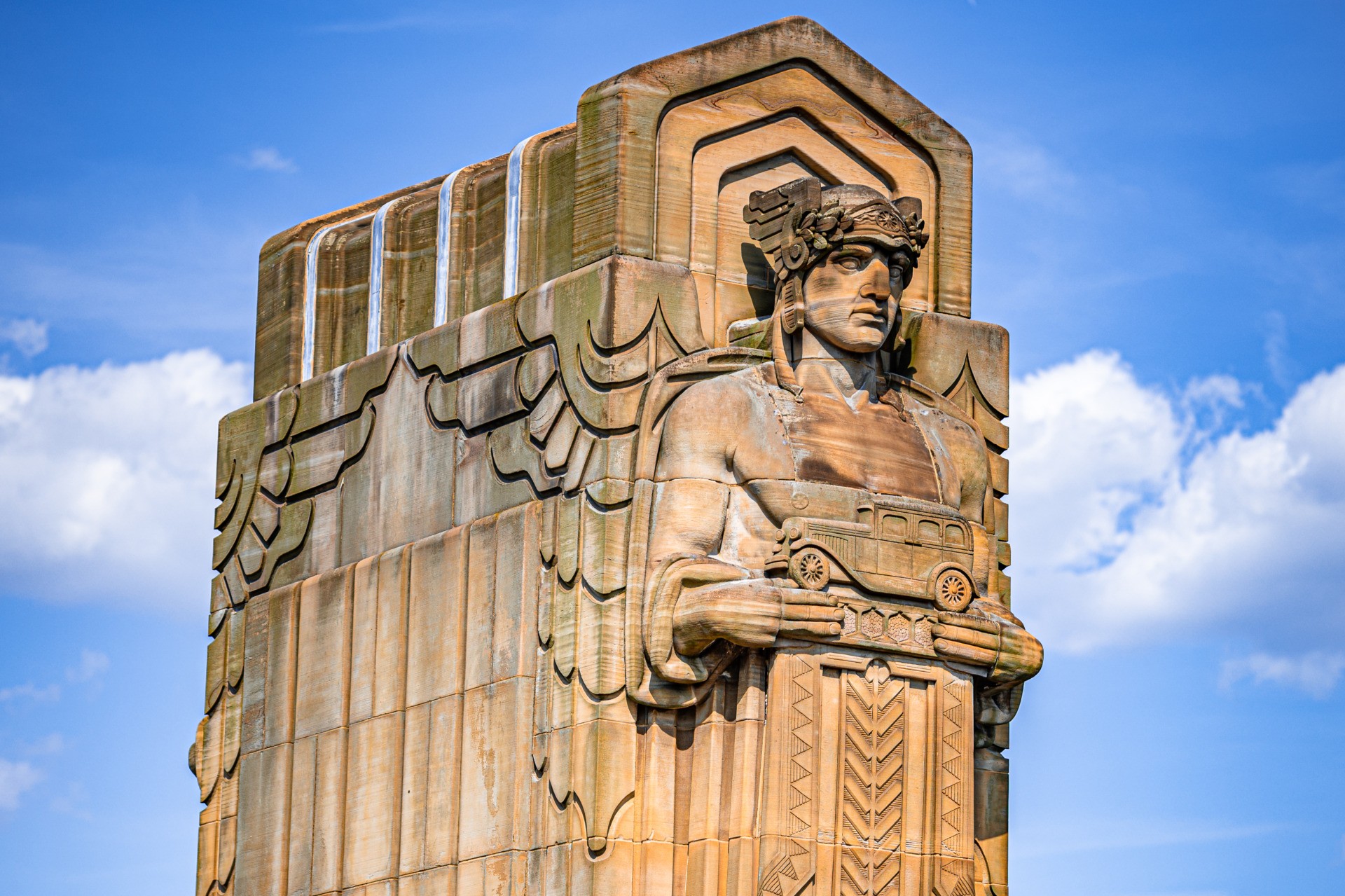 One of the 32-foot sandstone pylons known as the Guardians of Traffic that stand at the east and west entrances of the Hope Memorial Bridge in Cleveland, Ohio. (Photo by Erik Dost/Flickr)

Now, in the era of cancel culture and wokeness, Italian Americans face a new type of mob — one that seeks to scrap the federal holiday celebrating Italian immigrants and replace it with an “Indigenous Peoples’ Day,” claiming that Columbus Day offends Native American communities.

In October 2021, President Joe Biden issued the first-ever presidential proclamation for Indigenous Peoples’ Day, adopting the practice long pushed by the left as a replacement for Columbus Day. 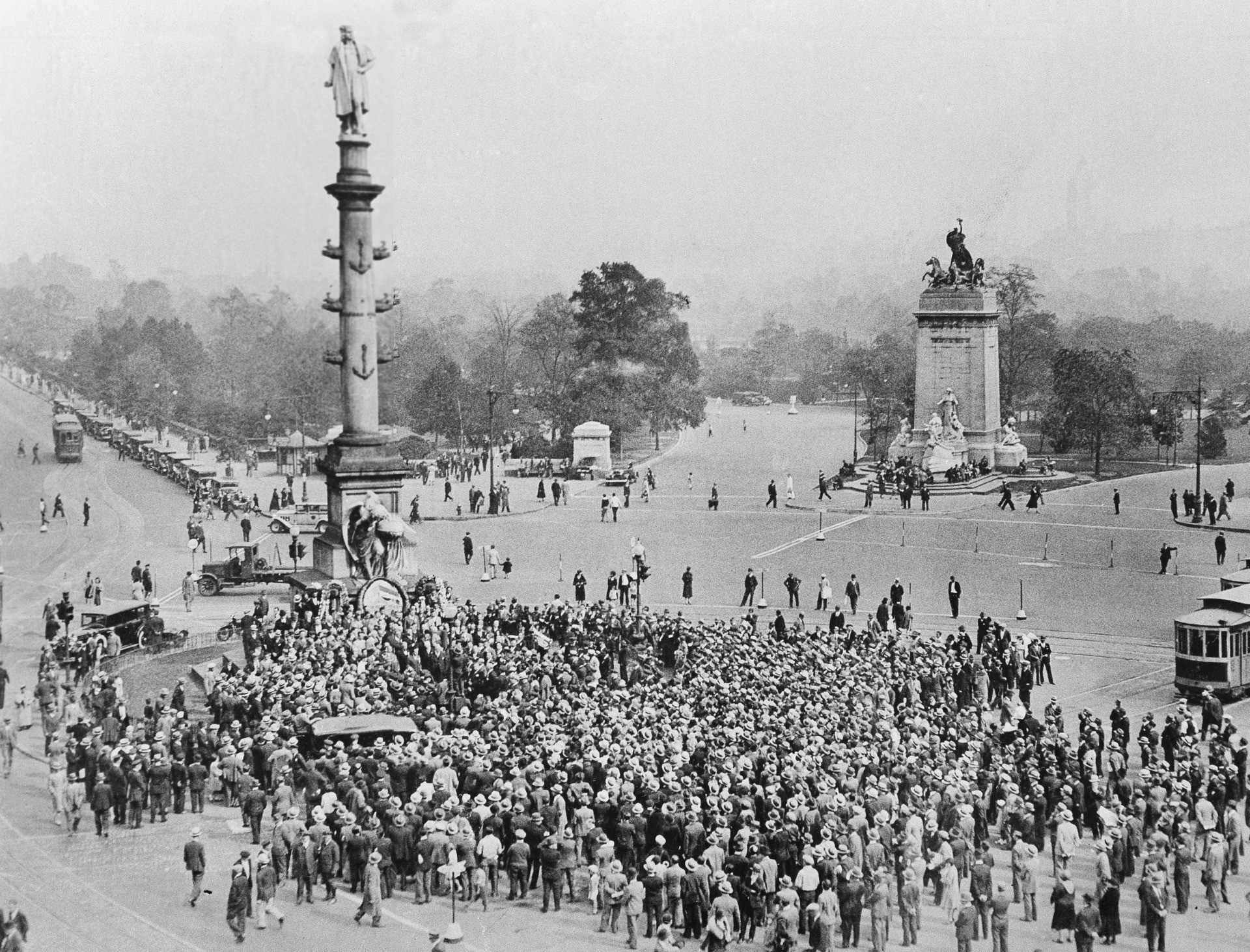 About 1,000 people gathered around the Columbus statue at Columbus Circle in New York City to celebrate Columbus Day on October 12, 1933. (AP Photo)