President Joe Biden revisited his love of trains during a trip to his hometown of Scranton, Pennsylvania, on Wednesday, promising to get millions of vehicles off the roads.

“We will take literally millions of automobiles off the road,” Biden boasted, arguing that more high-speed trains like the ones constructed in China would make trains more attractive.

If more people took trains, Biden argued, it would save millions of barrels of oil and reduce pollution.

“This is not hyperbole; this is a fact,” he insisted. “These are facts.”

Biden boasted $66 billion in government spending to subsidize trains in his infrastructure bill.

“I got more money for passenger rail than the entire Amtrak system cost to begin with,” he said. “We’re going to change the nation in a big way.” 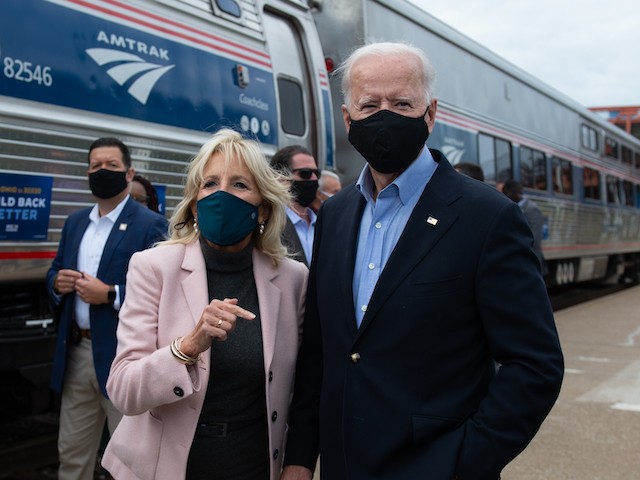 Joe Biden and his wife Jill speak to the press before boarding their train in the Cleveland Train Station on September 30, 2020, in Cleveland, Ohio. (Roberto Schmidt/AFP via Getty Images)

Amtrak continues to enjoy heavy subsidies from Congress even though it has famously lost money for 50 years. Since 1971, Amtrak has cost taxpayers more than $100 billion.

But Biden’s proposed plan sparked Amtrak to share a dream list of even more connected cities across the country by 2035.

In Scranton, Biden spoke at length about his long history of riding Amtrak, boasting he rode the train more than two million miles while he was senator and vice president.

“You should name half the line after me,” Biden said. “I am the most railroad guy you’re ever going to meet.”