ROME — The Vatican announced Wednesday that it has begun administering the third dose of the coronavirus vaccine, keeping the small city state on the cutting edge of response to the pandemic.

“In the second half of October, the Health and Hygiene Directorate of Vatican City State began to administer the third dose of vaccine against Covid19, giving priority to those over sixty and people with infirmities,” declared the director of the Vatican press office, Matteo Bruno, in an email.

The Vatican’s vaccine mandates have been among the strictest of any in the world.

Last February, the Vatican mandated that all its employees receive the coronavirus vaccine, threatening to demote or fire those who refuse. 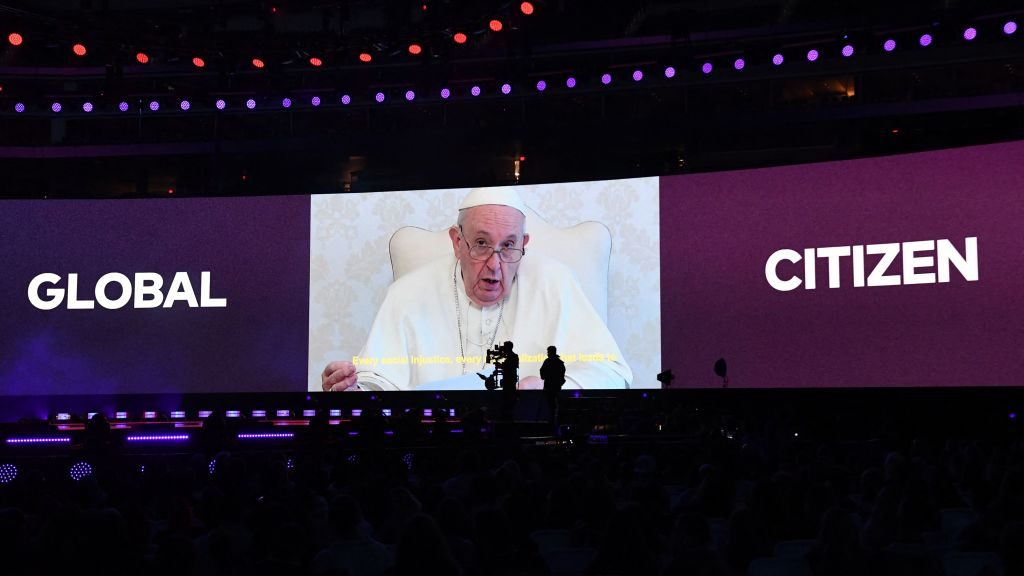 Pope Francis is seen on a screen during the taping of the “Vax Live” fundraising concert at SoFi Stadium in Inglewood, California, on May 2, 2021. (VALERIE MACON/AFP via Getty Images)

Those who decline the vaccine “without proven health reasons” make themselves liable to “consequences of different degrees that can reach up to the interruption of the employment relationship,” read a decree from Cardinal Giuseppe Bertello, then-governor of Vatican City State.

Although initially the head of the Vatican’s health department, Andrea Arcangeli, said that the vaccination would not be mandatory for Vatican workers and residents, the Vatican later changed its mind.

Last month, however, the Vatican went still further, decreeing that no one can enter its territory without presenting a coronavirus vaccine passport or “Green Pass.”

The pope himself instructed the Governorate of Vatican City State to issue the mandate in order “to prevent, control, and combat the public health emergency” in Vatican territory.

According to the decree, Francis did so while asserting the necessity of “ensuring the health and well-being of the working community with respect for the dignity, rights, and fundamental freedoms of each of its members.”

The normal way to obtain the Green Pass is by showing proof of vaccination against the coronavirus, but one can also demonstrate recovery from the virus or present a recent negative rapid antigen or PCR test every time one enters.

Vaccination is a simple way of promoting the common good and caring for each other, especially the most vulnerable. https://t.co/j9prRxvpoi

“These provisions apply to citizens and residents of the State, personnel in service of any sort of the Governorate of the State of Vatican City and of the various bodies of the Roman Curia and the institutions connected to it, to all visitors and users of services,” the decree stated.

Even for those participating in liturgical celebrations, access for the non-vaccinated is permitted “for the time strictly necessary for the performance of the rite.”

The Vatican’s doctrinal office (CDF) has declared that reception of the coronavirus vaccine must be “voluntary,” but Pope Francis has said “ethically everyone should take the vaccine” and that refusing the vaccine manifests “suicidal denialism.”