Florida Gov. Ron DeSantis’s (R) administration is following through with its repeated warnings and taking legal action against the Biden administration over coronavirus vaccine mandates, suing both President Joe Biden and NASA on Thursday.

Gov. DeSantis and Florida Attorney General Ashely Moody filed the lawsuit, first obtained by Fox News, “against Biden, NASA, NASA Administrator Bill Nelson, and officials within the White House Office of Management and Budget and the Department of Defense” over the federal vaccine mandates extending to executive branch workers and federal contractors, the latter of whom the DeSantis administration specifically vowed to challenge.

Florida Republicans filed the lawsuit, which takes direct issue with the mandate on federal contractors, in the U.S. District Court for the Middle District of Florida.

“Because the government’s unlawful vaccine requirement seeks to interfere with Florida’s employment policies and threaten Florida with economic harm and the loss of federal contracts, the State seeks relief from this Court,” the lawsuit states.

The DeSantis administration claims the Biden Administration is “relying on a statute” allowing the president to “‘prescribe policies and directives that the president considers necessary to carry out’ the Federal Property and Administrative Services Act (FPASA) of 1949 (FPASA),” forcing “millions of Americans who work for government contractors” to get the shot. 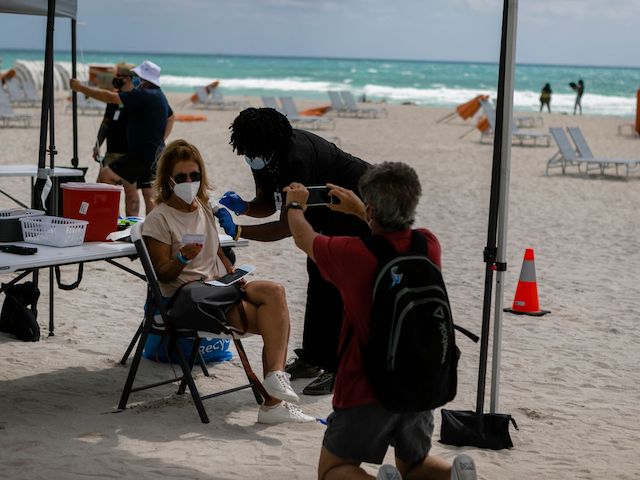 A woman gets a Johnson & Johnson coronavirus vaccine at a pop-up vaccination center at the beach, in South Beach, Florida, on May 9, 2021. (Eva Marie Uzcategui/AFP via Getty Images)

“Nothing in that statute authorizes such a radical intrusion on the personal autonomy of American workers—especially, as is the case here, when many of those workers are officials of a sovereign state,” it states, asking the Biden administration to “set aside” Biden’s order and take further action:

The state is arguing that the court “hold unlawful and set aside” Biden’s executive order; issue “preliminary and permanent injunctive relief enjoining Defendants from enforcing the executive order;” issue declaratory relief declaring the administration’s actions “unlawful;” award Florida costs and attorney’s fees; and award any other relief the Court “deems equitable and just.”

The lawsuit follows DeSantis’s prior warning this week, vowing to “not let the heavy hand of government force Floridians to take a shot.”

“There are also mandates that potentially could have devastating effects on the state of Florida. One is a federal contractor mandate” which is “putting thousands and thousands of jobs in jeopardy,” he said, noting there are a lot of contractors in Florida, particularly in space and defense.

Those workers are facing getting “kicked to the curb.” Meanwhile,  companies “are in a situation where if they don’t comply, then they would lose out on getting any contracts which is the basic way they do businesses, and so it’s a really really bad situation,” DeSantis said.

“So the attorney general and I, we are working now, we want to contest that contractor mandate in court as well,” he said, adding that his administration will also contest the mandate imposed on hospitals through CMS, where they lose Medicaid and Medicare funding if they fail to comply.

Attorney General Moody also warned during last week’s press conference that vaccine mandates will “not be tolerated” in the Sunshine State, vowing that she and DeSantis would “push back against these unlawful and unwise mandates” in “every way possible.”