A Fox News poll that showed Youngkin trailing McAuliffe by five points among likely voters two weeks ago now shows Youngkin has pulled ahead of McAuliffe by eight points, a lead that exceeds the poll’s margin of error.

Echelon Insights found Youngkin leading McAuliffe by three points in a poll released Friday, and, similarly, a co/efficient poll — an internal poll commissioned by the Republican candidate for lieutenant governor, Winsome Sears — revealed Thursday that Youngkin was ahead of McAuliffe by four points.

Polling averages charted by both RealClearPolitics and FiveThirtyEight reveal that Youngkin, for the first time, has a narrow edge over McAuliffe as of Friday.

Education policy has been a recurring theme in surveys after McAuliffe said in a debate at the end of September, “I don’t think parents should be telling schools what they should teach.”

Terry McAuliffe: "I don't think parents should be telling schools what they should teach." pic.twitter.com/7S15pTv1gY

The comment served as a turning point in the race, where McAuliffe’s short statement tapped into the heated national issue of parents versus school boards. As the moment became viral, McAuliffe was hit with an onslaught of criticism while Youngkin took the opportunity to amplify his pro-parent position with “Parents Matter” branding and campaign ads.

McAuliffe, who is relying largely on voter turnout in the deeply blue Northern Virginia region, also made the remark about parents while Northern Virginia’s populous Loudoun County has continued to make headlines nationwide as being “ground zero” in the school board debates over transgender policies, Critical Race Theory (CRT), and masking students.

The turmoil in Loudoun County took a grim turn in October when it was revealed that the daughter of Scott Smith, an angry father who had been arrested after an outburst at a school board meeting, had in fact been raped in a school bathroom by a teenage boy wearing a skirt. The school board meeting at which Smith was arrested had been discussing “transgender affirming” policies, which the board later approved 7–2. Parents were further enraged with the school board after the same teenage boy was detained at another Loudoun County school for allegedly groping a student, and superintendent Scott Ziegler eventually was forced to admit administrators had “failed to provide” a safe environment for students.

Youngkin weighed in soon after at a Fairfax County rally, demanding an investigation and accountability to a crowd of hundreds, many holding “Parents for Youngkin” signs. 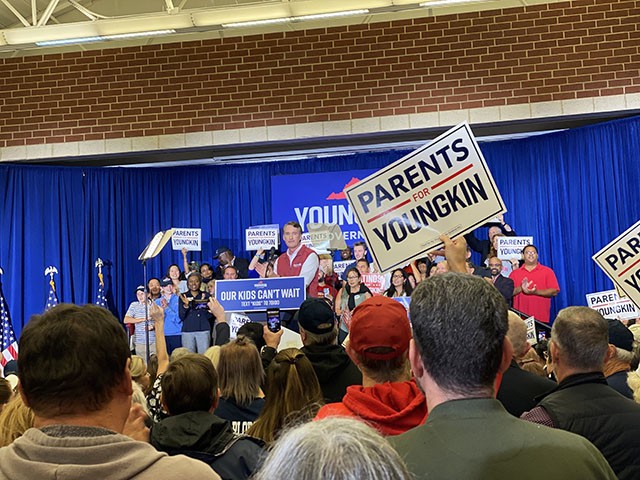 Glenn Youngkin speaks to supporters at a rally on October 19, 2021, in Fairfax County, Virginia. (Breitbart News)

A Washington Post/Schar School poll published Friday found Youngkin one point behind McAuliffe, 48 percent to 49 percent, but while the top line showed the gap between the candidates had closed only slightly in Youngkin’s favor, the change in response to education was glaring.

The poll had identified in September that the top issue for voters was the economy at 27 percent, followed by coronavirus at 16 percent, and education and “something else” tied at 15 percent each. In October’s poll, however, education shot to the top, with 24 percent deeming it the number one issue, followed by the economy, then coronavirus.

The Post noted that among those who believe education is a top issue, “Youngkin has gained significant ground. … In September, education voters favored McAuliffe by 33 points, but now they tilt toward Youngkin by nine points.”

McAuliffe appeared to take note of the shifting ground and released a campaign ad last week attempting to correct the narrative about his stance on parents. “We know good schools depend on involved parents. That’s why I want you to hear this from me. Glenn Youngkin’s taking my words out of context. I’ve always valued the concerns of parents,” McAuliffe says in the ad.

“That’s why I want you to hear this from me, Glenn Youngkin is taking my words out of context,” @TerryMcAuliffe says in a new ad pic.twitter.com/2ke4pyiD8x

Many polls began to reflect the issue of education in October, but as early as August, the tides subtly began turning for Youngkin amid President Joe Biden leading a disastrous withdrawal of U.S. troops from Afghanistan and then, on September 9, announcing a draconian federal vaccine mandate. The continuous flow of illegal migrants at the southern border under Biden’s administration also moved to the forefront when thousands of Haitian migrants began cramming into squalid makeshift encampments in Del Rio, Texas, in September. Now into October, Democrats’ failure to find enough common ground to pass any infrastructure plan has only further exacerbated Biden’s unpopularity.

While the president’s approval rating has been plummeting, McAuliffe himself admitted in early October his campaign was facing “a lot of headwinds from Washington.” Among registered voters, the Post’s poll showed a decline in Biden’s approval since September from 46 percent to 43 percent while his disapproval rose from 51 percent to 53 percent.

McAuliffe does however have an advantage seeing that Virginia is a blue-leaning state. Republicans have not won a statewide race in the Old Dominion since 2009, while Democrat presidential candidates have taken the state for the past four elections. Now, with just days left in this year’s race, McAuliffe has mounting pressure to continue the blue streak as his lead disappears in polls and his campaign stumbles to the Tuesday finish line.

On Friday, the embattled Never-Trump Lincoln Project, which has endorsed McAuliffe, organized a stunt where individuals dressed as white supremacists from the 2017 Charlottesville protest posed as Youngkin supporters, seemingly in an attempt to tie Youngkin to white supremacy. The stunt backfired in grand fashion, however, as memes broke out online mocking McAuliffe for the posers while prominent Democrat Rep. Eric Swalwell (CA) fell for the trick.

Lis Smith, a former Pete Buttigieg senior adviser, wrote on social media after the orchestration, “What a massive, massive screw up. The last thing that the McAuliffe campaign needed this weekend. A total disservice to the hundreds of hard-working staffers on the ground.”

Meanwhile, McAuliffe campaign spokesperson Renzo Olivari was consumed Friday night with apologizing for his own tweets, unearthed from 2012, that used the N-word and contained other race-based jokes.

Early voting in the race has been ongoing since September 17 and concludes Saturday. Election Day takes place on November 2.