Sen. Cynthia Lummis (R-WY) told Breitbart News in an exclusive statement Thursday that Saule Omarova, President Joe Biden’s Comptroller of the Currency nominee, and others that believe bitcoin is a threat to national security are “scared” of relinquishing control over Americans.

Lummis, a pro-cryptocurrency lawmaker, asked Omarova during her nomination hearing if she believed that bitcoin served as a national security threat to the United States. 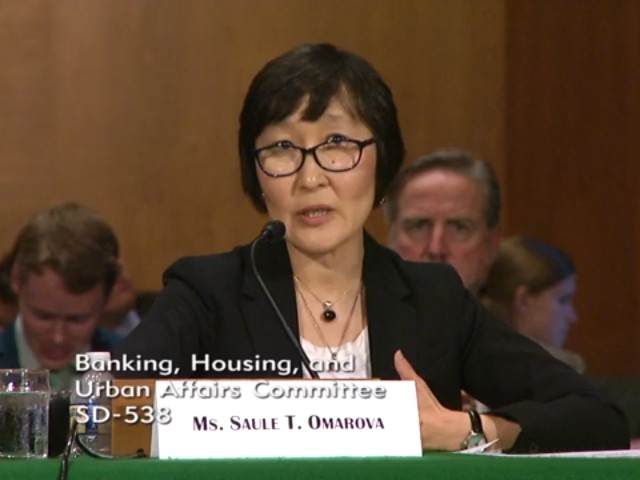 Omarova said, “I would worry if all of our financial transactions were up to some blockchain system, where you know various actors might actually be located in other countries not particularly friendly to us, control the functioning of that system.”

Lummis told Breitbart News that Omarova’s concerns about digital currencies only exhibit her desire for more financial control over the American people. The Wyoming conservative said that bitcoin allows Americans to save amidst rising inflation.

“Those that believe bitcoin is a threat to national security are scared of relinquishing any control over the American people. The United States government continues to debase the American dollar by spending trillions of dollars without a second thought,” Lummis said. “Bitcoin is a good store of value and more and more Americans are looking to store their savings in bitcoin and other digital assets to make sure their retirement isn’t jeopardized by our government’s irresponsible actions.”

Asked by Lummis, Omarova also refused to pledge on Thursday not to politicize lending in a repeat of the Barack Obama administration’s Operation Choke Point.

Omarova, if confirmed, would have wide regulatory power over cryptocurrency companies, including her ability to block charter approvals.

She has also exhibited anti-cryptocurrency writings in her academic papers.

Omarova has also called for the creation of a central bank digital currency, or CBDC, which would massively expand federal government control over America’s financial system.

A former senior government official told Breitbart News, “And, why do they want to do that? Because eventually, they want to be able to decide which transactions to approve and disapprove of. You know, that’s what it’s ultimately all about.”

… the political left doesn’t like crypto, because right now the left is all about command and control, they want to control your thinking, they want to control your spending, etc. And, crypto doesn’t allow that because there is no person. It’s a decentralized network for peer-to-peer exchange where nobody can tell you what to spend your money on. That’s a problem. If you believe in controlling people.

Omarova has even appeared to blame the rise of cryptocurrencies in expanding access to finance.

She wrote in “Technology v. Technology: Fintech as a Regulatory Challenge” that the “root of the problem” in the “massive digitization of finance” is the “critical shift in the … balance of power in the financial system” away from government control.