Rep. Elise Stefanik (R-NY) weighed in on Friday on the Democrat Party infighting in her district, saying the Saratoga Democrat Party chairman should resign following two of Stefanik’s Democrat challengers accusing the chairman of sexism and homophobia.

Stefanik’s campaign said in a statement to Breitbart News that Saratoga County Democratic Committee chairman Todd Kerner “should be ashamed” after a remark one of Stefanik’s challengers in the 21st Congressional District, Bridie Farrell, said Kerner made to Farrell during a phone call.

“There is no doubt that sexist, Cuomo crony Saratoga County Democrat Chair Todd Kerner must resign. He should be ashamed and is a disgrace,” Stefanik’s campaign stated.

Farrell, a Democrat and former speed skater who announced she was running for office in July, said in a fundraising email that Kerner called her to tell her to drop out of the race and that when she noted Kerner had not even met with her yet, Kerner replied, “As a man, I’m not comfortable meeting with you alone”:

“As a man, I’m not comfortable meeting with you alone.”

Read my email below. RT if you too think this is BS. pic.twitter.com/feoX5rXQco

Democrat attorney Matt Putorti, who announced his bid to unseat Stefanik in June, piled on to Farrell’s criticisms, saying in a social media thread that he believes Farrell’s claim and that Kerner should resign.

Putorti also charged that both Kerner and other state Democrat chairs have conveyed a homophobic attitude toward him, noting they “have also insinuated to my team that I cannot win because I’m gay”:

That said, you and other chairs have also insinuated to my team that I cannot win because I’m gay. And are attempting to rig the process against a woman as well. This is not what our party stands for. And again, you should resign.7/7

Kerner replied to Farrell’s email in a public Facebook post, accusing her of “blatantly lying.” Kerner said he and numerous other party chairs in New York unanimously determined another Democrat candidate, Matt Castelli, was most qualified to challenge Stefanik.

Kerner argued, “Ms. Farrell told me she should be the candidate as she was the only female on the Democratic side. My answer to her was as a party we should not base decisions on a person’s race, sex, or religion.” Kerner claimed Farrell had previously canceled two meetings with him.

Farrell then said in a follow-up fundraising email that Kerner was deleting comments on his Facebook post: 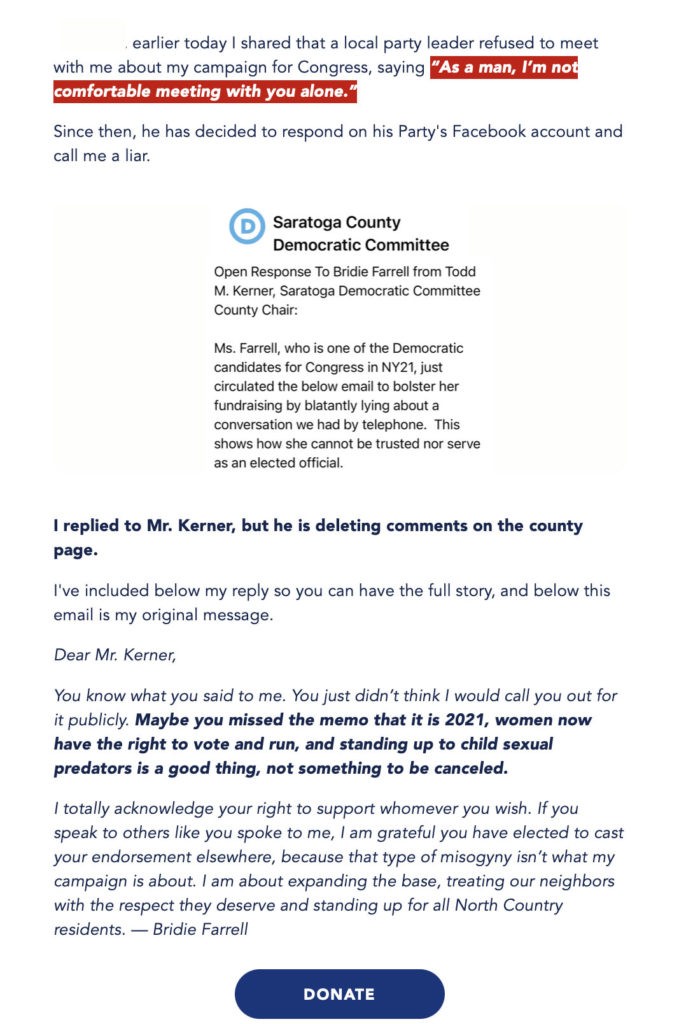 Kerner had also been commenting on Twitter on the accusations against him, but as of the time of this writing, his Twitter account appeared to be nonexistent: 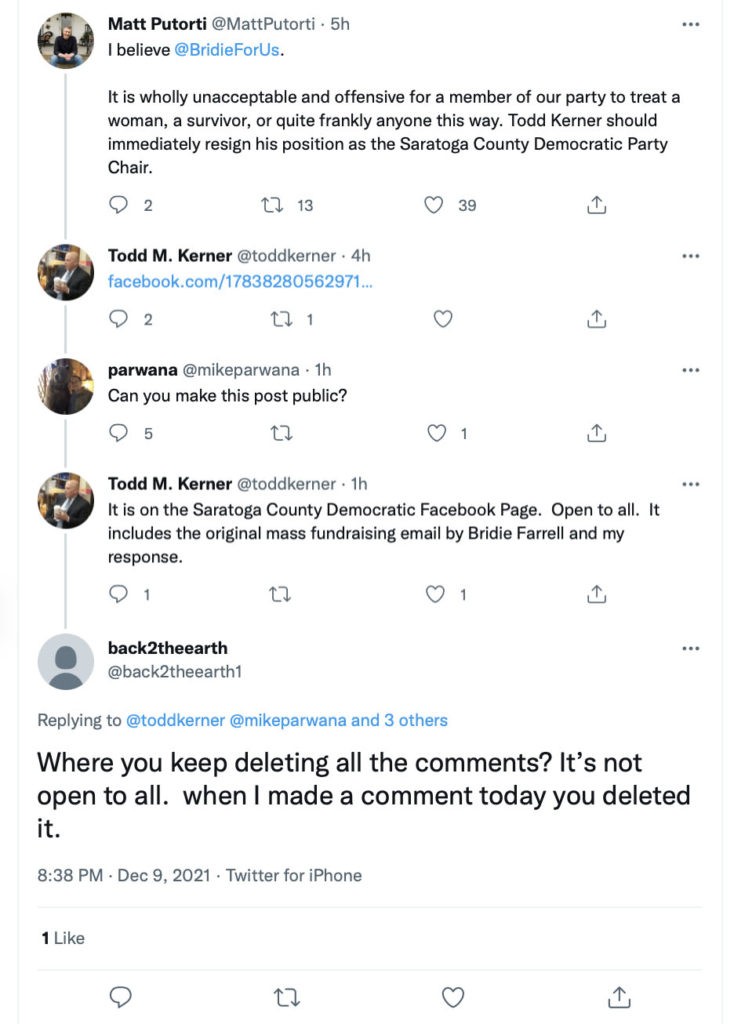 Stefanik’s campaign said of the intraparty conflicts, “North Country Democrats continue to implode – whether it’s the multiple arrests of local Democrat elected officials for criminal possession of cocaine, the Democrat County Committees’ backroom deals to bow to DC, New York City, and Cuomo crony political consultants to force a Far-Left downstate candidate on the voters, or the North Country Democrats’ sordid and long history of sexism and embrace of sexist smears.”

The New York Republican’s campaign added, “This is the biggest and earliest political implosion we have seen yet for North Country Democrat committees and candidates – a true achievement based on their historic and massive losses in every single election against Congresswoman Elise Stefanik.”

Castelli, a former CIA officer and the candidate who earned the backing of Kerner’s group of county Democrat bosses, has — along with both Farrell and Putorti — come under fire from Stefanik’s campaign for having never voted in the 21st District before and for only just registering to vote ahead of their congressional runs. Farrell has also taken heat for declining in a City & State interview to say how long she has actually lived in the district as an adult.

The Stefanik campaign concluded, “As this trainwreck of the Democrat primary continues, the reality is every Democrat candidate is a Far Left Socialist who supports Joe Biden and Nancy Pelosi’s failed agenda that voters will resoundingly reject. This is why Elise earns support from Republicans, Independents, and Democrats for her record of results for the North Country. Team Elise can’t wait for 2022.”