While millions of American citizens are being hit with mandates to obtain one of three approved vaccines for the Chinese coronavirus, new data reveals that thousands of illegal aliens are refusing the vaccine.

This week, while striking down President Joe Biden’s vaccine mandate for every large business in the nation, the United States Supreme Court upheld a mandate that will require 17 million American healthcare workers to obtain the vaccine or risk firing.

Likewise, in a number of blue states like California, New York, and Illinois as well as giant corporations like McDonald’s and Goldman Sachs are requiring millions of Americans to obtain the vaccine to work, eat in restaurants, enter event venues, and other indoor spaces.

New data, published by CBS News, reveals that nearly 4-in-10 illegal aliens in Immigration and Customs Enforcement (ICE) detention are refusing the vaccine:

The 48,246 individuals who have received a coronavirus vaccine in detention also represent only one-third of 141,000 immigrants who have entered ICE custody after July 2021, when the agency received its first federal allocation of vaccines for detainees, according to an analysis of government data. [Emphasis added]

According to unpublished ICE records, 37.6% of immigrants who have been offered the vaccine by the agency have declined it. [Emphasis added]

At the same time, coronavirus infections have exploded in recent months inside ICE detention facilities. Since the start of the new year, detained illegal aliens with coronavirus have jumped 520 percent. 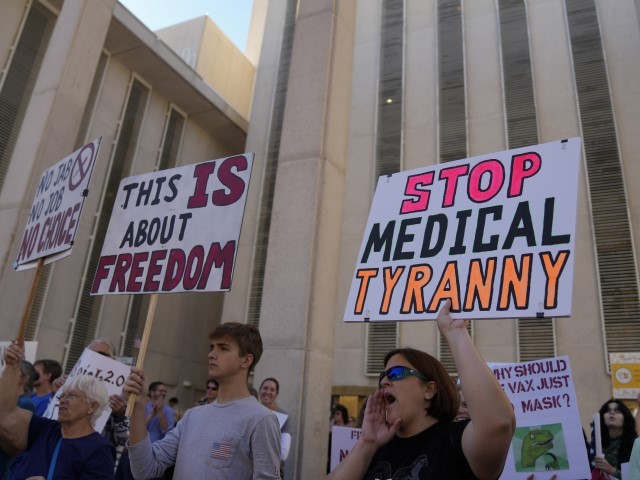 While Biden and elected Democrats have continued to impose vaccine mandates on American citizens, they have routinely exempted illegal aliens from such requirements.

Last November, for instance, Biden announced that cross-border truckers would be mandated to be vaccinated in order to continue working. The order exempted border crossers and illegal aliens.

Months before, Democrats on the House Judiciary Committee blocked legislation by Rep. Darrell Issa (R-CA) that would have mandated all foreign nationals in the U.S. seeking to adjust their immigration status to be vaccinated.

Former Customs and Border Protection (CBP) Commissioner Mark Morgan, a visiting fellow at the Heritage Foundation and the Federation for American Immigration Reform (FAIR), has previously said that “few to none” of the border crossers and illegal aliens arriving at the southern border are vaccinated.