Ukrainian President Volodymyr Zelensky delivered an emergency evening speech to his citizens on Wednesday night in response to a series of bizarre comments by his American counterpart Joe Biden that appeared to indicate the latter’s certainty that Russia would invade Ukraine and assert America would not act in the event of a “minor incursion.”

Zelensky urged citizens to “take a deep breath” and “calm down,” reminding them that Russia already invaded Ukraine in 2014 – Russia has been illegally present in Ukraine’s Crimean peninsula since then – and, contradicting Biden, asserting that the risk of further invasion had not significantly changed in recent weeks.

Zelensky posted the speech to his social media accounts:

“Didn’t the invasion start in 2014? Has the threat of war emerged just now? These risks have existed for more than a year, and they haven’t increased,” Zelensky asserted, according to a translation by the news site Ukrinform. “What has increased is the hype around them.”

“All our citizens, especially the elderly, need to understand this. Take a deep breath. Calm down,” Zelensky reportedly urged. “Don’t run for buckwheat and matches. To all the media – remain mass media, not sources of mass hysteria. In the pursuit of hype don’t help the enemy, reporting daily that war may start tomorrow! This will definitely not stop it.”

“What are you supposed to do? Only one thing. Keep your head calm and cool, remain confident in your strength, in your Army, in our Ukraine,” the president advised. “Do not get anxious, react smartly to everything, not emotionally! With your head, not your heart.”

Zelensky also used the opportunity to apparently condemn the Biden administration for refusing to sanction or in any way punish Russia’s belligerent behavior. Zelensky has spent much of the past year urging the United States and other allied nations to sanction the Nord Stream 2 natural gas pipeline project, which would connect Russia to Germany and essentially grant Russia a monopoly over the western European fuel supply. Biden has ignored Zelensky, stating he would only consider sanctions after Russia invades.

Zelensky has in the past lamented that sanctions after an invasion “won’t matter.”

Zelensky’s nationally televised remarks were a direct response to Biden appearing to abandon Ukraine to Russian colonization during a press conference that day.

“My guess is he will move in. He has to do something,” Biden said when asked if he believed Russian leader Vladimir Putin would greenlight a military invasion of Ukraine (presumably a separate invasion from the two currently underway in Crimea and Donbas, an Eastern Ukrainian region). 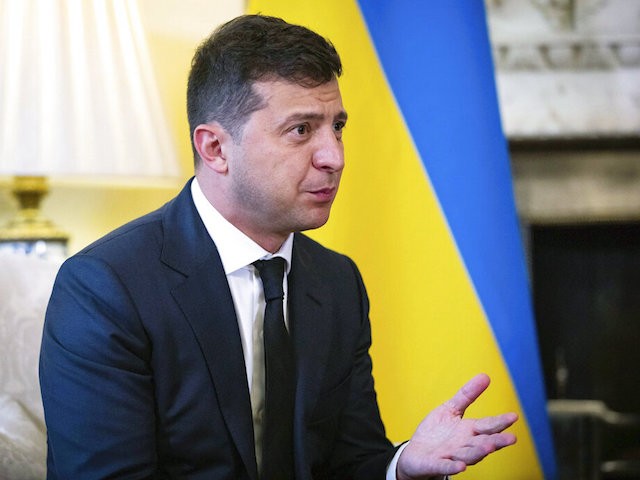 President of Ukraine, Volodymyr Zelenskyy during a meeting with Prime Minister Boris Johnson, in Downing Street , London, to sign a strategic partnership deal with the president in the face of Russia’s “destabilising behaviour” towards the country. (Aaron Chown/PA Wire)

Biden told reporters that “Russia will be held accountable if it invades,” without elaborating, but suggested America would not respond “if it’s a minor incursion and then we end up having a fight about what to do and not do, et cetera.”

Biden’s remarks immediately triggered a firestorm, both at home and in Kyiv.

According to an unverified CNN report, the Zelensky administration’s reaction to his comments was, simply, “horror.” In Congress, senators graded Biden’s remarks as “weak,” “impotent,” “catastrophic,” and “troubling.”

“He would be better off not speaking,” Sen. Lindsey Graham (R-SC) lamented.

“President Biden has been clear with the Russian President: If any Russian military forces move across the Ukrainian border, that’s a renewed invasion, and it will be met with a swift, severe, and united response from the United States and our Allies,” the statement read in part. “President Biden also knows from long experience that the Russians have an extensive playbook of aggression short of military action, including cyberattacks and paramilitary tactics. And he affirmed today that those acts of Russian aggression will be met with a decisive, reciprocal, and united response”

Secretary of State Antony Blinken was in Ukraine Wednesday as Biden predicted that Russia would invade the country.