President Joe Biden is “clearly suffering cognitive impairment,” according to feminist author Dr. Naomi Wolf, who blasted the commander-in-chief for pressuring media outlets to censor COVID “misinformation,” as she warned of a “totalitarian reality” and the “Nazification” of public discourse.

In an interview with Steve Malzberg on his weekly Sunday commentary show Eat the Press, progressive feminist author and former Democrat adviser Dr. Naomi Wolf expressed her concerns over media censorship and the “otherizing” of those choosing not to vaccinate.

Asked about President Biden recently scolding media outlets and social network platforms, urging them to censor what he deemed “misinformation” about COVID-19 despite the constantly changing and conflicting information provided by the Centers for Disease Control and Prevention (CDC) and others in government, Wolf claimed the president was suffering from “cognitive impairment.”

“These are huge questions and they’re also related to the fact that the White House allowed a president who’s clearly suffering cognitive impairment to have a two-hour press conference,” she said.

Wolf, who is also CEO of DailyClout, went on to lament the “incredibly disturbing” censorship of Americans’ free speech, with President Biden now “invoking social media and tech companies’ allegiances to the Democrat Party.”

“I say this sadly as a lifelong Democrat: to censor Americans is incredibly disturbing because we have a First Amendment,” she said, arguing that “tech companies are not supposed to be creating a one-party party line, and that’s exactly what they’re doing.”

“And he’s asking them to merge and intensify this unholy oligarchy that’s been created with the [Democratic National Committee] (DNC) and whoever is benefiting from the DNC and tech companies and pharma in a way that is going against more and more emergence of a collapsing narrative around COVID,” she added.

Asked about threats against doctors for prescribing certain medications in treating COVID-19, as well as the recent pressure campaign against music streaming service Spotify by a group of nearly 300 scientists and doctors aimed at cracking down on content from popular podcaster Joe Rogan, Wolf referred to such actions as “an all-out war.”

“It’s an all-out war,” she said, calling the talking points of the American Medical Association (AMA) — where doctors fearful of losing their licenses withhold information concerning potential vaccine side effects from patients — “completely in violation of the science.”

“They come from the NIH [National Institutes of Health] and they’re not correct,” she added.

She also called out such “illegal” practices, while noting their prevalence.

“I have so many doctors writing to me saying they’ve been threatened with losing their licenses if they let people with pre-existing conditions know what the risks are or give them informed consent,” she said, “and that is illegal. These people are going to go to jail.”

“It’s against the Nuremberg Code. It’s against the ADA (Americans with Disabilities Act),” she added, “it’s against every law about informed consent that doctors and scientists are supposed to sign on for.”

She then challenged the “nonsensical letter” about so-called “misinformation” signed by “a lot of veterinarians and dentists.”

Wolf went on to list cruel and outdated practices in medicine that were later withdrawn despite being promoted by scientists at the time.

“In my own lifetime, silicone breast implants were being prescribed with no awareness that there were health consequences,” she said, noting that eventually, they had to be removed.

She then blasted the current un-American reality which has emerged.

“So the fact that we’re in this CCP-style environment, media environment, in which scientists — [including Dr. Robert] Malone [who] helped to invent the mRNA vaccine — and podcasters are told, ‘you must not speak about whatever it is your concerns are’ — that is not an American reality, it’s not a Western reality,” she said. “It is a truly totalitarian reality.”

“I have to say, as a CEO of a tech company rolling out a Facebook competitor, it’s a really good time to be not Big Tech; GETTR and other alternative platforms that are not [part of this] Big Tech alliance with this oligarchy are really expanding,” she added. “People need free speech.”

Weighing in on a recent clip featuring The View’s Whoopi Goldberg scolding unvaccinated tennis star Novak Djokovic after his deportation from Australia, Wolf said she finally understood the “delusional” viewers of such programs.

“Now I understand why so many of my former friends and loved ones who watch shows like The View and watch CNN, and NPR, and read the New York Times, are so delusional, respectfully, they are insane,” she said, “and it’s because they’re watching nonsense like this.”

She then called out the “totalitarian” lies promoted by the president regarding vaccination.

“Studies are categorically [proving], and the CDC even confirms, vaccination doesn’t affect transmission,” she said. “So this whole narrative that even President Biden repeats that you have to get vaccinated for other people is simply a lie — it’s a totalitarian lie.” 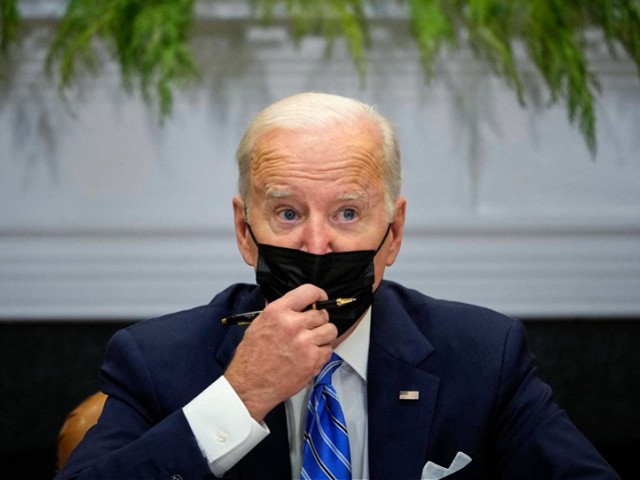 U.S. President Joe Biden speaks during a meeting with the White House COVID-19 Response Team in the Roosevelt Room of the White House December 16, 2021, in Washington, DC. Biden made a brief statement to the press regarding the Omicron variant of the coronavirus. (Photo by Drew Angerer/Getty Images)

“It’s a lie that is propagated in order to ‘otherize’ the unvaccinated and to justify the CCP-style [Chinese Communist Party] social controls,” she added.

Asked about former Labor Secretary Robert Reich telling Democrat senators in a since-deleted tweet to give Sen. Kyrsten Sinema (D-AZ) “the backs of their hands” following a bipartisan vote in the Senate Wednesday night, Wolf said she did not believe he was encouraging violence against women, but still warned of the “cruelty” that eventually results from such rhetoric.

“I absolutely see … the kind of encouragement of otherization, withholding of groceries, withholding of medical care, withholding of free assembly of the unvaccinated, or of people who are standing in the way of the Democratic agenda, leads to the kind of coarsening of sensibilities that leads to cruelty,” she said, “and we’re seeing unbelievable cruelty that nice people like Robert Reich — pleasant guy, right? — are now feeling comfortable expressing in public.”

Calling such support for shunning “shocking,” she noted that “if you study history, it’s not that surprising.”

“Just otherizing the unvaccinated,” she stated, “the fact that I can’t walk into a restaurant in my own city, New York City, the great melting pot, the great liberator of refugees from totalitarian regimes around the world — that leads to this kind of Nazification of public discourse that we’re seeing,” she warned.

“It’s tragic and it ends in a very bad place,” she concluded, “but I’m not surprised to see people saying things now they wouldn’t have said two years ago.”

In response, she lashed out at Democrats criticizing the freedom of individuals to challenge mainstream takes on matters of public interest and deeming the relationship between the Democratic National Committee (DNC), the Biden administration, and Big Tech to be an “unholy marriage” aimed at silencing dissenting voices.

In March, she expressed alarm regarding President Biden’s state of health and its implications for U.S. national security, stating that “as Americans, we would be remiss not to notice that this is a man who is struggling physically, and our national security kind of depends on our being grown-ups.”