Members of the Freedom Convoy protest in Ottawa, Canada, continued to dance, sing, and enjoy a hot tub on Thursday night as Ottawa police threatened mass police action to begin on Friday.

Police arrested two of the convoy’s most prominent leaders, Chris Barber and Tamara Lich, late on Thursday and have announced that they would not allow the protest to continue into the weekend.

The “Freedom Convoy” is a series of nationwide protests in Canada led by truckers, who have used their vehicles to block off downtown Ottawa – where the Canadian Parliament is located – and major international crossings, demanding the Canadian government end all civil rights violations in the name of the Chinese coronavirus pandemic. Truckers have become the face of the movement because their protest began in response to a vaccine mandate imposed on them to cross the Canadian-American border. Truckers argue that they spend too much time alone – driving, stopping at motels, and otherwise alienated from large crowds – to present a significant risk of spreading Chinese coronavirus. 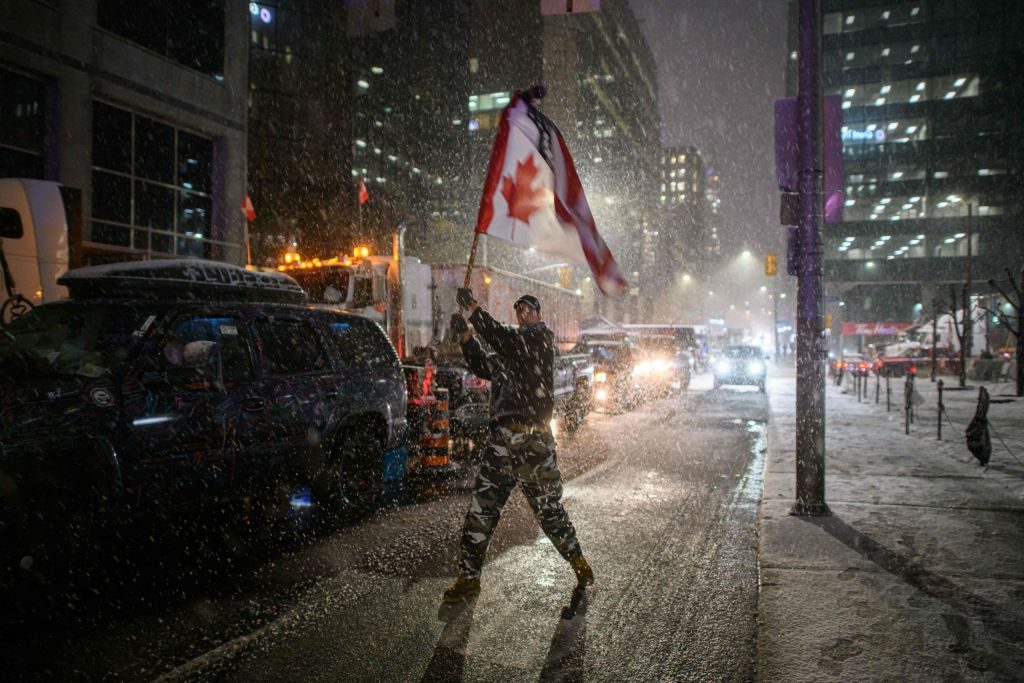 Snow falls around a demonstrator waving a flag during a protest by truck drivers over pandemic health rules and the Trudeau government, outside the parliament of Canada in Ottawa on February 17, 2022. (ED JONES/AFP via Getty Images)

While Freedom Convoy protests have sprung up throughout the country, the Ottawa iteration is now the largest and oldest one left. The protest in the capital has been overwhelmingly peaceful, according to police – who have arrested only a small number of people for the Canadian crime of “mischief.” Both Barber and Lich are facing “mischief” charges.

“Despite the arrests, many protesters continued to dance in the snow while blasting music as dozens of rigs remained parked in the area,” Canada’s CTV reported on Thursday night. Canada’s Globe and Mail newspaper similarly described an ongoing festival atmosphere in Ottawa on Thursday night in a report from the ground.

“The site of the blockade on Thursday was wet and grey but the party continued outside the Prime Minister’s Office, with people dancing on a stage and music blaring,” the newspaper narrated. “Hot dogs and burgers were grilled on barbecues and a steady flow of fuel-filled jerrycans made their way to the trucks parked in the blockade.”

The Globe and Mail observed that one of the most popular installations at the protest, a hot tub, was open and in use as of Thursday night.

OTTAWA 📍: A bouncy castle and a hot tub were set up by Freedom Convoy protesters as police marched through to hand out notices telling peaceful demonstrators to vacate the area. pic.twitter.com/j1edFMECjG

“The blow-up hot tub that went viral over the weekend was also fired up again with two men soaking in the tub near the House of Commons entrance for MPs and parliamentary staff,” the newspaper noted.

The Globe and Mail spoke to several protesters who said they had “nothing to lose” given that vaccine mandates had taken their jobs. Others simply stated they were open to being arrested to defend their values.

“Wayne Harvey, from the Esgenoopetitj First Nation (also known as Burnt Church) in New Brunswick parked his RV so that it blocked all lanes of traffic on Sussex Drive,” the Globe and Mail reported, noting that Harvey explained that he had parked to “protect everyone on the inside … so if the tow truck comes, they can’t easily tow us.”

Rebel News, an independent Canadian outlet, also recorded several instances of defiance against the police, including a moment in which protesters linked armed to protect one of their own when police attempted to arrest him.

“You must leave the area now. Anyone blocking streets, or assisting others in the blocking street, are committing a federal offence and you may be arrested,” a police flyer obtained by Breitbart News read. “You must immediately cease further unlawful activity or you will face charges. If you are arrested you may be released on bail depending on factors contained in Part XVI of the Criminal Code.”

By Thursday, police announced an extensive plan to blockade the downtown core of Ottawa and encircle the protesters, consisting of setting up 100 checkpoints and not letting anyone in without a reason police deemed “legitimate.”

The extensive police action on Thursday followed far-left Prime Minister Justin Trudeau announcing this week that he would take the unprecedented measure of invoking Canada’s Emergencies Act to shut down basic rights like the right to free assembly and the right to private banking in an attempt to end the protests. The Canadian Parliament is set to vote on granting Trudeau those powers on Monday, but canceled its debate on the topic Friday in light of the police action in Ottawa.

Premiers of several Canadian provinces reacted with alarm to Trudeau’s invocation of the law. 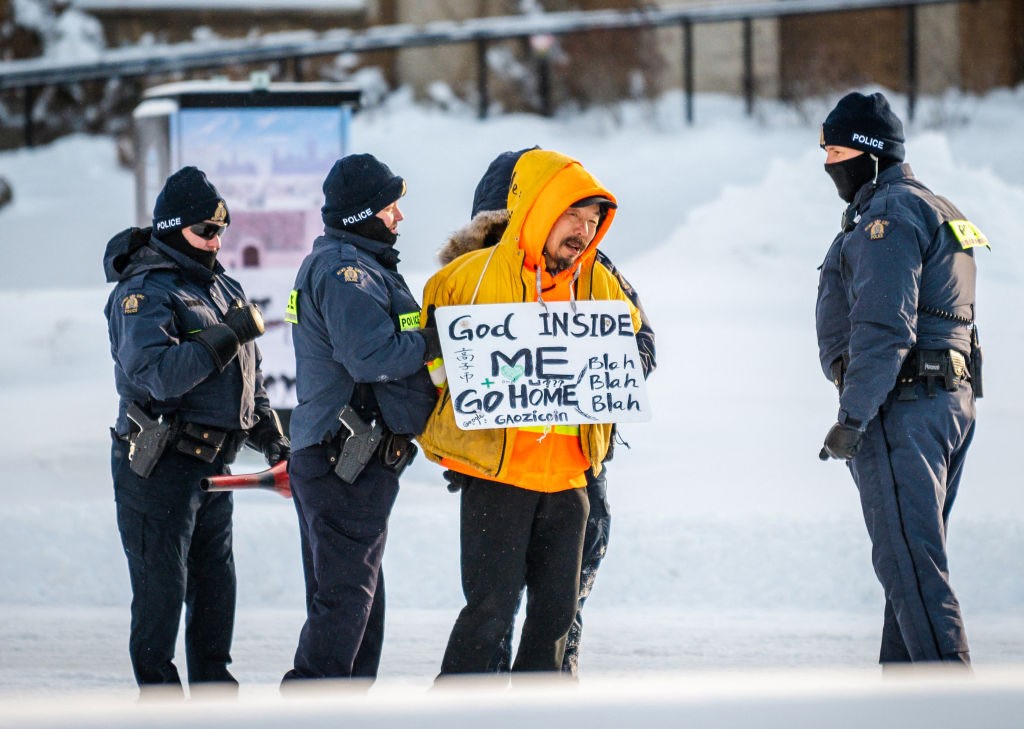 A demonstrator is arrested by police in Ottawa on February 18, 2022, as they begin to remove protesters demanding an end to Covid-19 mandates. (ANDREJ IVANOV/AFP via Getty Images)

“I think it’s important that Manitobans and Canadians know and understand that it’s not necessary, and we need to think very carefully and clearly before going in that direction,” Manitoba Premier Heather Stefanson said in response to Trudeau.

The premier of Quebec, Francois Legault, stridently declared that Trudeau’s act “should not, must not, apply in Quebec,” complaining that Quebec had hosted small, one-day protests that had resulted in no significant disruptions and thus invoking the Emergencies Act, meant for incidents like large-scale terrorism, was disproportionate.

“I think that at this moment, it would not help the social climate. There’s a lot of pressure right now, and I think we have to be careful. We really don’t need to throw oil on the fire,” he asserted.