The flyers appeared printed on Ottawa Police Service (OPS) letterhead and were reportedly handed out to pedestrians and motorists in downtown Ottawa. The flyers’ header describes the message as a “notice to demonstration participants.” 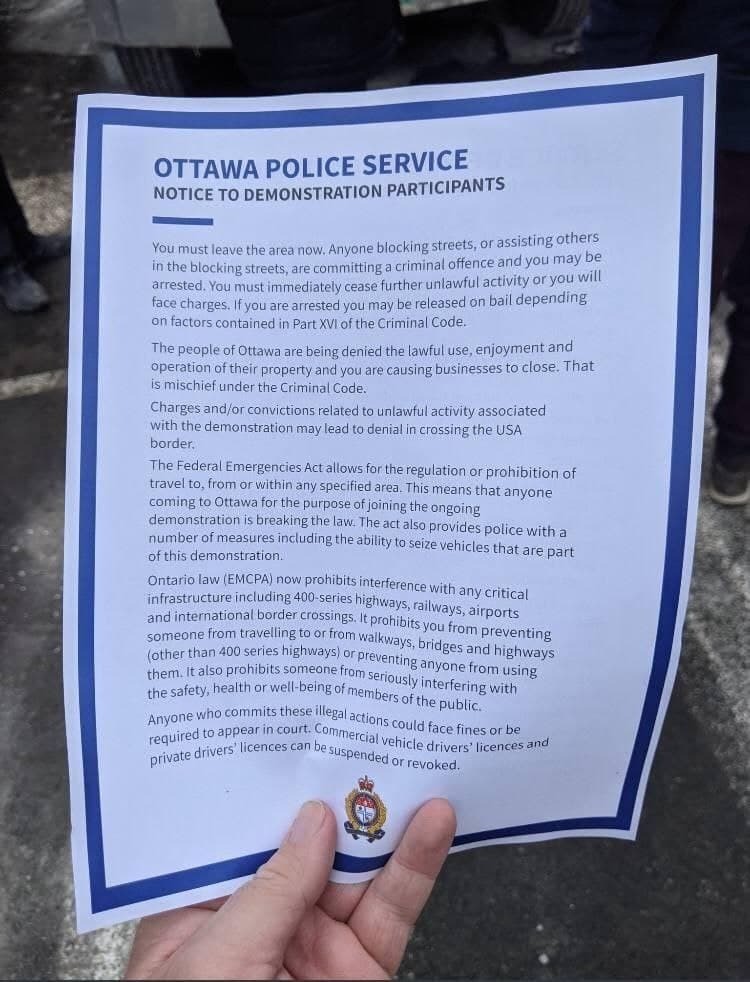 You must leave the area now. Anyone blocking streets, or assisting others in the blocking street, are committing a federal offence and you may be arrested. You must immediately cease further unlawful activity or you will face charges. If you are arrested you may be released on bail depending on factors contained in Part XVI of the Criminal Code.

The people of Ottawa are being denied the lawful use, enjoyment and operation of their property and you are causing business to close. That is mischief under the Criminal Code.

Charges and/or convicting related to unlawful activity associated with the demonstration may lead to denial in crossing the USA border.

The Federal Emergencies Act allows for regulation or prohibition of travel to, from or within any specified area. This means that anyone coming to Ottawa for the purpose of joining the ongoing demonstration is breaking the law. The act also provides police with a number of measures including the ability to seize vehicles that are part of this demonstration.

Ontario law (EMCPA) not prohibits interference with any critical infrastructure including 400-series highways, railways, airports and international border crossings. It prohibits you from preventing anyone from using them. It also prohibits someone from seriously interfering with the safety, health or well-being of members of the public.

Prime Minister Justin Trudeau invoked the Emergencies Act on Monday, describing the Freedom Convoy in Ottawa as an “illegal occupation” of the city. He has repeatedly described the peaceful protest in Canada’s capital city built on civil disobedience as “not peaceful.”

Premier Doug Ford announced a “state of emergency” across the province on Friday.