The website oilprice.com posted an analysis about how the push for green energy years before Russia invaded Ukraine – and on steroids since Joe Biden became president – is to blame for soaring oil prices and foreign policy weakness.

The analysis begins with a story about a team from MetalMinder, “the largest metals-related media site in the U.S.”, on a trip to Germany in 2018 where they discovered people’s health suffered from coal pollution because after the Japanese Fukushima nuclear disaster it began shutting down its nuclear energy operations.

“In hindsight, that decision by Germany appears both foolish and ironic,” the team concluded. “Foolish because Germany has lost its negotiating power (pun intended) with Russia for which it relies.  It’s ironic because the country already had ‘clean energy’ but now must turn back to dirty energy to avoid blackouts.” 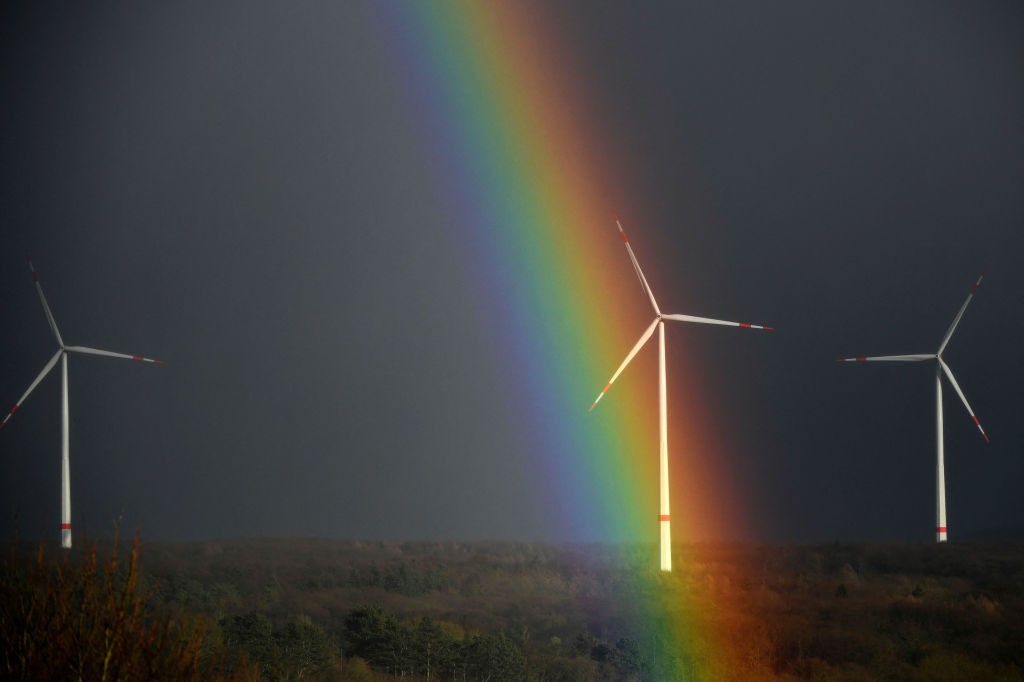 A rainbow is seen behind a wind turbine near Breuna, western Germany on February 17, 2022. (INA FASSBENDER/AFP via Getty Images)

The Associated Press reported in January on Germany’s nuclear power legacy, including now-former Chancellor Angela Merkel shutting down operations across the country:

Germany on Friday shut down half of the six nuclear plants it still has in operation, a year before the country draws the final curtain on its decades-long use of atomic power. The decision to phase out nuclear power and shift from fossil fuels to renewable energy was first taken by the center-left government of Gerhard Schroeder in 2002. His successor, Angela Merkel, reversed her decision to extend the lifetime of Germany’s nuclear plants in the wake of the 2011 Fukushima disaster in Japan and set 2022 as the final deadline for shutting them down.The three reactors now being shuttered were first powered up in the mid-1980s. Together they provided electricity to millions of German households for almost four decades.

The world is watching, the analysis said, to see if the sanctions against Russia will work. They don’t think they will, especially because while Biden has almost singlehandedly shut down the once flourishing domestic fossil fuel sector Putin is being allowed to continue his lucrative oil exports — including to the United States.

The analysis said, in part:

Does energy independence create autonomy? Germany and the rest of Europe may have the opportunity to discover that answer now. Energy of course drives the overall economy literally fuels productivity. In supplier negotiations, the easiest way to control the process involves gaining leverage. And thus the easiest way a country can gain leverage involves the control of its energy. We now see this throughout Europe and to a lesser extent, the United States right now. The US placed sanctions on Russia but failed to address the oil they sell us. In this respect, the US has lost negotiation leverage. By ceding our own energy autonomy, the US becomes beholden to despots like Putin. Moreover, Russia can choose both to cripple the US as well as the timing.

Oil prices have no immediate cap. Prior to the invasion, rising demand already provided price support. By shutting down American production, the US gave up its control over the oil price. As a net exporter of oil, the US also supplied the world market. Thus the US had a role with both supply and demand. Second, any time oil prices surged, the US could enter the market with more supply and thus help control prices. Moreover, as the only non-OPEC producer, the US had some control over global oil prices.

Meanwhile, what is the price of propping up alternative energy, which is much less reliable than fossil fuels?

“Have you ever stood in a field and felt a constant breeze for hours with no interruption at all?” the analysis said. “Well, we haven’t either.”

“However, if you think wind comes and goes how about relationships with other countries like Russia?” the report asked. “Perhaps one can conclude that renewables serve best as supplemental energy sources, certainly not primary sources. When Texas needed to fly helicopters with jet fuel derived from oil to thaw out windmills, clearly the grid did not perform as planned. This begs the question: will the move to green energy continue and will it pull up metals prices needed to support green energy initiatives? If the trend does not continue, one might expect a sharp reversal for several metals.”

And as a result of the less reliable wind and solar, the market has shown an uptick in gasoline-powered home and commercial generator sales, according to one seller Generac — including in the Ukraine and Russia.

The analysis said this means people here at home think the power grid is unsustainable.

“The green narrative centers around climate change as the root cause of more severe weather but the other factor relates to the unreliability of green energy and power companies have failed to make the investments in backup energy sources needed to support wind and solar,” the analysis said. “Green energy goes down far more often than either nuclear or coal plants.”

Aside from generators, the analysis said another fossil-fueled spinoff from the push for electric vehicles will include diesel vehicles made with mobile generators to charge cars that have run out of juice on highways.