Georgia gubernatorial Democrat nominee Stacey Abrams was hammered by 102 sheriffs who signed a joint statement “condemning” the candidate for supporting the “Defund the Police movement” and “soft on crime policies.”

The statement was released on Gov. Brian Kemp’s website. Kemp, who is the Republican nominee, will face Abrams in November in a rematch of their 2018 gubernatorial election, which Abrams never conceded after losing.

Over the last four years, Governor Kemp and his family stood shoulder to shoulder with the men and women serving in Georgia’s law enforcement community. Working alongside our departments, Governor Kemp has championed legislation to recruit and retain more officers into the profession, strengthen penalties for criminals and help keep Georgia’s streets safe, and prevent rogue local governments from stripping critical funding and resources from police.

In stark contrast, Stacey Abrams has repeatedly shown complete disdain for law enforcement and the risk we take every day putting our lives on the line to serve our communities. Ms. Abrams actively serves on the governing board of – and has profited from – an anti-police organization which openly advocates for abolishing prisons and stripping local police departments of their funding.

Stacey Abrams also supports proposals that put criminals back on our streets and clears their criminal record, and she opposed legislation to crack down on human trafficking when she served in the state legislature.

The sheriffs then stated that if Abrams’ policies were to be implemented, it would put them and the communities they protect “at risk.” 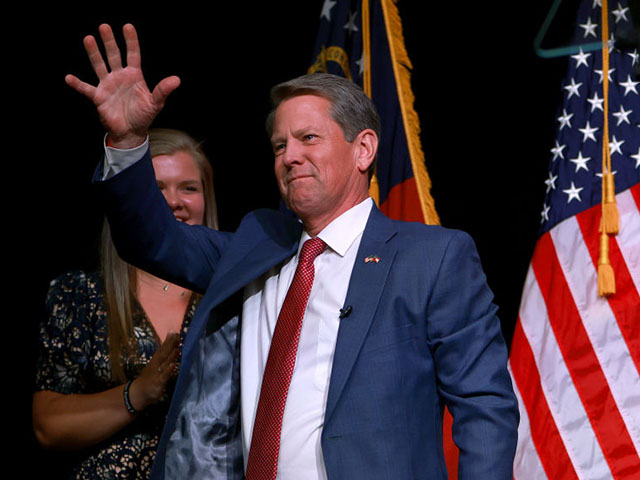 “In these uncertain times, it is critical to our profession that Georgia’s leaders stand firmly behind the men and women in law enforcement who keep Georgia families safe,” the statement further read. “We are grateful to have the support of Governor Kemp and his administration, and we call on Stacey Abrams to disavow the dangerous policies she supports.”

Kemp has been a consistent supporter of law enforcement since taking office. The governor signed a bill in May 2021 “to prevent law enforcement from being defunded in the state,” Breitbart News reported at the time.

While Abrams last week came out in support of raising the salaries of police officers in the state, many were quick to point out — including Breitbart News’s John Nolte — that the Democrat nominee sits on the board of an organization that supports the “Defund the Police” movement.