WASHINGTON, District of Columbia — Former President Donald Trump dedicated most of his keynote address at AFPI’s America First Agenda Summit on Tuesday to crime, one of the main issues facing Americans across the country.

During his speech, Trump said public safety is one of the “core issues” facing the country. “There is no higher priority than cleaning up our streets, controlling our borders, stopping the drugs from pouring in, and quickly restoring law and order,” he said.

“In the Democrat rule, in Democrat-run cities, Democrat-run states, and a Democrat-run federal government, the criminals have been given free rein more than ever before,” the former president said. “There’s never been a time like this. Our streets are riddled with needles and soaked with the blood of innocent victims.”

Trump also said the “once great cities” where the middle class used to “flock,” such as New York, Chicago, and Los Angeles, are now crime-ridden “warzones.” He continued, “Every day, there are stabbings, rapes, murders, and violent assaults … Bloody turf wars rage … [and] parents are worried sick that their kids will get shot on the way to school.”

“We’re living in such a different country … Our country is now a cesspool of crime. We have blood, death, and suffering on a scale once unthinkable because of the Democrat Party’s effort to destroy and dismantle law enforcement all throughout America. It has to stop, and it has to stop now,” Trump explained. 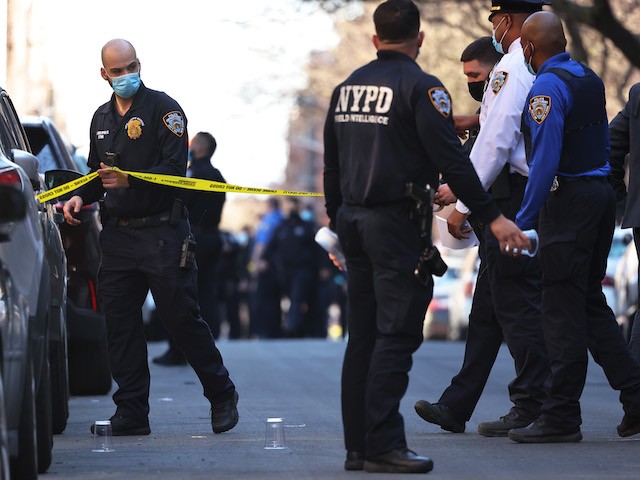 NYPD officers respond to the scene of a shooting that left multiple people injured in the Flatbush neighborhood of the Brooklyn borough on April 06, 2021, in New York City. So far this year New York City has seen a 40% rise in shootings over the same period in 2020. (Photo by Michael M. Santiago/Getty Images)

The former president described some recent violent crimes during his lengthy hour-long speech: a 73-year-old man being attacked, a 35-year-old woman being stalked, a young girl struck in the head with a bullet while driving with her family, and a criminal being arrested and released more than half a dozen times.

However, he said he “could go on with these stories for months and years” because so many cases of crime happen to innocent Americans. He declared, “We owe it to the victims, we owe it to our families, and we owe it to our country to do the right thing.”

Trump said fixing the problem would all start with the next Congress and would continue “on to the next Republican president.” “We need an all-out effort to defeat violent crime in America and strongly defeat it and be tough and be nasty.”

The former president, in his first speech back in D.C., said, “We have to give our police back their authority, resources, power [and] leave our police alone,” while claiming that the police don’t want to fully do their jobs because they are “afraid they’re going to be destroyed,” going to get their pensions taken away, fired, or put in jail.

“Give them back the respect that they deserve,” Trump said.

He demanded the country also return to a time when stop and frisk was widely used and not shy away from it. When the Republicans take back the House, he wants them to also look to “strengthen qualified immunity and other protections for our great police officers” because they are the country’s “heroes.”

“We’re going to have a great country and a safe country,” he exclaimed. “Our law enforcement heroes of our time, they do their duty to protect U.S. citizens and to protect everybody whether it’s our country or other countries coming in to pay their respects to the United States, which they do less and less now.”

“We must uphold our duty to protect our police officers because of the radical Democrats and because of what they’ve done driving record numbers of officers to resign or retire or quit,” he said. “The new Congress should immediately pass emergency funding to hire and retain tens of thousands more police officers all across our country.”