Highly potent strains of marijuana known to have large concentrations of tetrahydrocannabinol (THC) have created an uptick in addictions worldwide, according to a UK study.

Published Monday in the journal Lancet Psychiatry, the study showed people who use cannabis with a THC potency above 5 to 10 milligrams per gram have a higher risk of addiction and mental health problems.

“A report by the United Nations found that in the past two decades, the proportion of people seeking treatment for cannabis addiction has risen in all world regions apart from Africa,” he said. 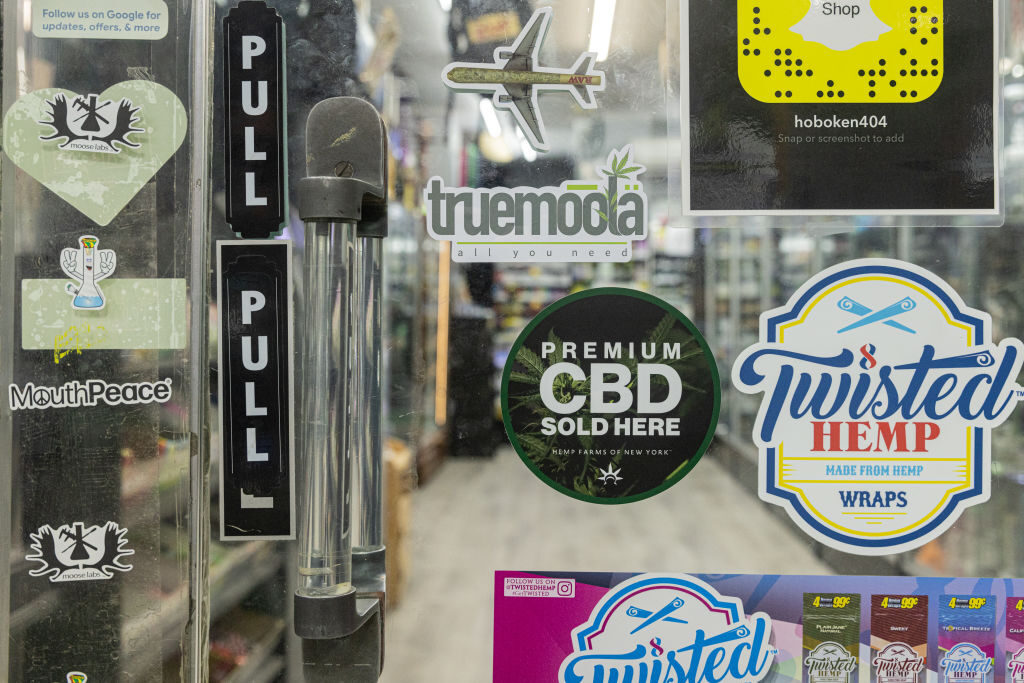 A ‘Premium CBD Sold Here’ sticker on a smoke shop in Hoboken, New Jersey, U.S., on Thursday, April 7, 2022. In New Jersey, Hoboken is racing to become first in the NYC area with adult-use recreational weed. The sweeteners to be paid come atop the 2% in gross sales that the dispensaries will hand to Hoboken as a tax. (Jeenah Moon/Bloomberg via Getty)

Currently, roughly three in 10 people in the United States have been diagnosed with marijuana addiction, according to statistics from the US Centers for Disease Control and Prevention (CDC). Likewise, the European Monitoring Centre for Drugs and Drug Addiction found a 76 percent increase in treatment for marijuana addiction over the past decade.

The study further showed an increase in THC level concentrations going all the way back to 1975. Per CNN:

In a gram of herbal cannabis, the dried and harvested tops of female marijuana plants that are typically smoked, THC concentrations increased by approximately 2.9 milligrams each year, according to a 2020 study by Freeman and his team at the University of Bath.

In cannabis resin, the sticky brown sap on the plant from which extracts and concentrations are made, THC levels increased by approximately 5.7 milligrams each year from 1975 to 2017, the study found. Concentrated products can reach extremely high levels of THC.

Freeman also cautioned that consumers may not be entirely aware of THC levels in the cannabis products they consume, especially if purchased illegally. He also warned that individual efforts to curtail potency, “such as by adding less cannabis to their joint or inhaling less deeply,” do not effectively lower a person’s the intake of THC.

No Trial For ‘Allahu Akbar’ Man Over Death of Jewish Woman on Account of His Heavy Marijuana Use https://t.co/N0uVrLBKxp

The study furthermore noted that people addicted to cannabis have a higher risk of psychosis or a “loss of contact with reality,” such as hearing voices or delusions.

“The evidence linking cannabis potency to addiction and psychosis was very clear,” he told CNN.

As many 19 states and the District of Columbia have legalized marijuana for recreational use in the United States.