The Department of Education “immediately and permanently” dissolved its “National Parents and Families Engagement Council” after conservative organizations sued.

An organization many families saw as a public relations stunt after Attorney General Merrick Garland ordered the FBI to investigate parents as “domestic terrorists,” the council will cease to exist only six months after its establishment.

In a statement following their capitulation, the Department of Education said of the lawsuit’s premise that “The Department disagrees, but has decided to not move forward with the National Parents and Families Engagement Council.” 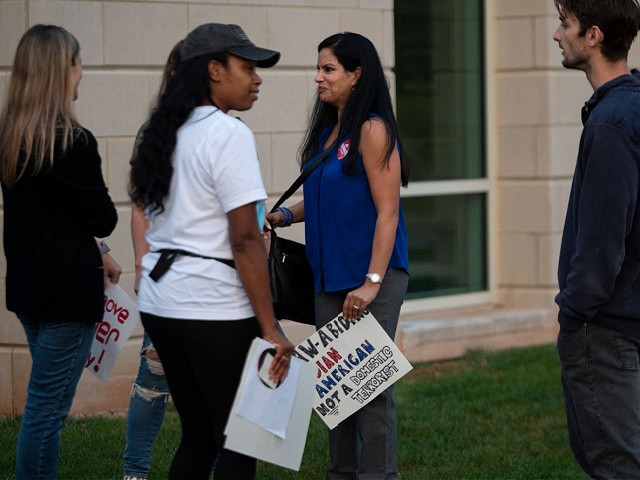 Protesters and activists stand outside a Loudoun County Public Schools (LCPS) board meeting in Ashburn, Virginia on October 12, 2021. (Photo by ANDREW CABALLERO-REYNOLDS/AFP via Getty Images)

The challenge, led by America First Legal (AFL) and joined by Fight for Schools and Families (FSF) and Parents Defending Education (PDE), alleged the formulation of the council failed to follow federal law.

Although a procedural challenge, the plaintiffs saw the council as a way for the Biden administration to “paper over their open hostility towards parents and families,” according to a statement from AFL vice president and general counsel Gene Hamilton.

“While we continue to seek justice and accountability for the issuance of the Attorney General’s absurd October 2021 memorandum that initiated this whole sequence of events, we are tremendously proud to have partnered with other concerned patriots to effectively end the Biden Administration’s faux Council,” he continued.

Many, including PDE president Nicole Neily, pointed out the one-sided political nature of the council and chided the Biden administration for choosing to shut down the association instead of adding “intellectual diversity” to it.

“Students do best when their families are involved in their education – and it should be a goal at the federal, state, and local level to bring us into the process, not to shut us out when our perspectives and values differ,” Neily said in a statement. “Parents will not be used as window dressing to advance radical policies, and we will do everything in our power to protect and defend our children from those who would do them harm.”

FSF executive director Ian Prior also slammed the Biden administration for attempting to “rig the system once more by stacking the deck with the very special interest groups that awakened parents across America to their long game to politicize public schools with a far-left, anti-parent agenda.”