The number of women in part-time jobs has doubled in the eight years of President Barack Obama’s tenure, because his management of the economy has produced very few new full-time jobs, according to a new report by left-wing academics.

“We find that 94 percent of net job growth in the past decade was in the alternative work category,” he acknowledged, despite Obama’s claim to have created 15 million “good jobs at good wages.” He added, “And over 60% was due to the [the rise] of independent contractors, freelancers and contract company workers.”

Essentially, nearly all of the jobs created in the last decade were not traditional nine-to-five jobs, the report showed.

Krueger co-authored the report for the National Bureau of Economic Research, and showed how found the percentage of American workers employed in “alternative work,” an economist’s polite term for part time and temporary help, jumped from 10.7 percent to 15.8 percent between 2005 and 2015. 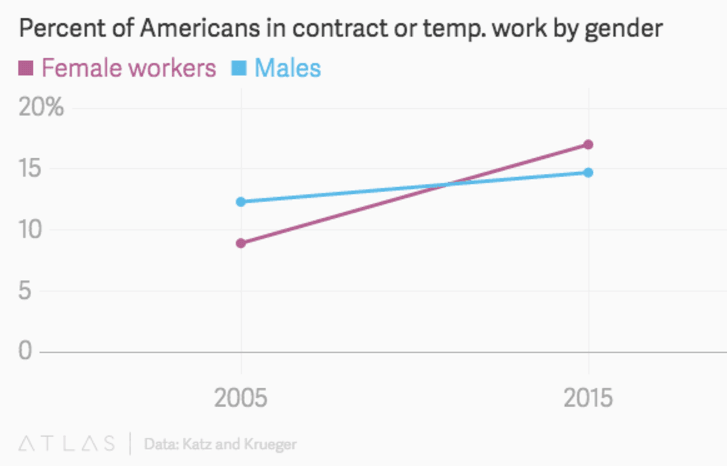 The decline of conventional full-time work appears to have impacted every demographic. “Workers seeking full-time, steady work have lost,” according to Krueger. He seems to be trying to put lipstick on a pig when he added, “While many of those who value flexibility and have a spouse with a steady job have probably gained.”

In grim news for millennials taking on huge loans to attend college, since 36.3 percent of individuals involved in alternative work are college graduates with 4-year and advanced degrees. Given that females now account for 57 percent of college students, the percentage of women losing full-time employment opportunities is set to rise in the future.

Also, millions of prime-age men have been pushed out the workforce by government policy, according to the current chairman of Obama’s economics panel. That trend leaves a greater burden on women in their lives, including mothers and wives.

Simultaneously, Obama has ramped up the annual inflow of foreign contract-workers and immigrants to take many jobs, putting more stress on American men and women.

Krueger acknowledged that the survey’s original goal was to quantify the size of the gig economy that amounts to about 0.5 percent and growing, but they were stunned by the tremendous growth of alternative work.