Following the shooting of more than 10 police officers in Dallas, Texas, there has been an eruption of celebration about the deaths on Twitter.

Anti-police users, many of them Black Lives Matter supporters, took to the platform to praise the deaths of the Dallas policemen. Many called the dead policemen “pigs,” while others said that they deserved to be killed. Still others openly called for more police deaths, echoing the calls for cop-killings that flooded the platform in the days preceding the Dallas shootings. 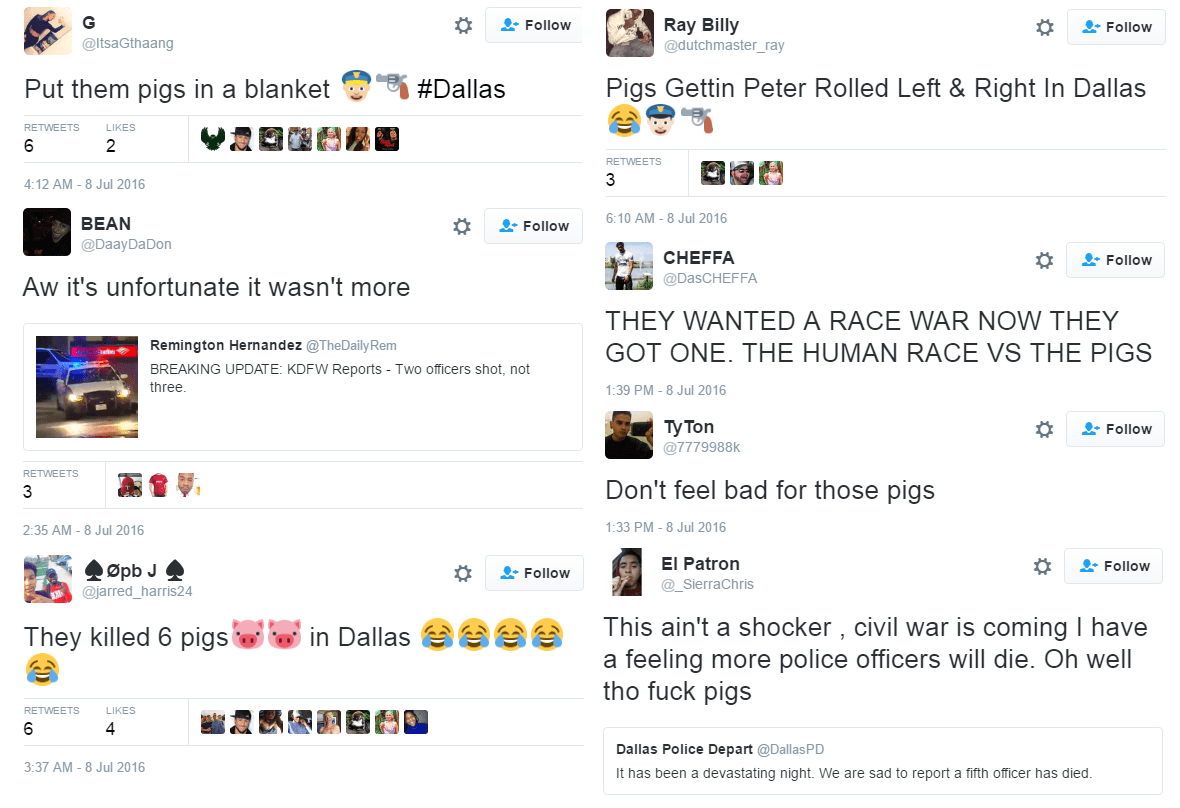 Remington Hernandez, a Texas-based journalist, was also deluged with tweets praising cop-killing after he posted a news update about the shootings.

They brought this on themselves https://t.co/BYYV5IVTKs

It's only getting started. https://t.co/qxPSGWcheH

Twitter’s terms of service explicitly forbids “threats of violence” and any tweets that “promote violence, including threatening or promoting terrorism.” The company also bans use the platform for the “furtherance of illegal activities.” Yet, so far, the platform has taken no action against accounts promoting violence against the police, which includes a verified user with more than four hundred thousand followers.

Instead, the company issued a tweet in support of anti-police protesters, pledging to “join the voices demanding racial justice.”

These tragedies must lead to action. We join the voices demanding racial justice now. #AltonSterling #PhilandoCastile

Twitter is known for its close links with the Black Lives Matter movement. The company’s CEO, Jack Dorsey, is thought to be especially close to DeRay Mckesson, the leading figure of the anti-cop movement. Dorsey and Mckesson have held multiple meetings together, and recently appeared on stage together at Recode’s annual tech conference.

While Twitter has yet to take action against any of the users encouraging violence against the police, the company has acquired a dismal track record of unfair and unexplained punishments of conservative users. When the reasons for such suspensions do come out, they are typically minor or spurious. In one case, conservative actor Adam Baldwin had his account locked for a tweet that was deemed mildly insulting to left-wingers. Meanwhile, users who openly call for violence not only remain unpunished, but retain their verified status on the platform.