Facebook has refused to remove a graphic image depicting a policeman having his throat slit, reports the Daily Mail.

The picture, posted on “Black Panther Party of Mississippi,” a Facebook page frequented by the Dallas shooter, Micah Xavier Johnson, was reported to the social network by a concerned user. But Facebook refused to take the image down.

In a response to the user, Facebook said the picture did not violate their policies. “We reviewed the post you reported for promoting graphic violence and found it doesn’t violate our Community Standards” said the social network in their reply.

Facebook does not have a blanket ban on violent images, as they are sometimes used in news reporting. However, its community standards do prohibit images that are shared for “sadistic pleasure or to celebrate or glorify violence.”

This unquestionably captures the image that was posted to the Black Panther page, but the social network has yet to take action. At the time of writing, the image remains hosted on the platform. 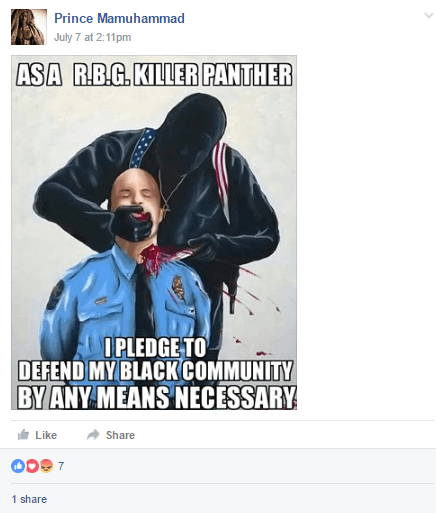 According to the Daily Mail, Dallas shooter and black supremacist Micah Xavier Johnson posted to the same Facebook page several times before his deadly attacks in Texas.

In the disjointed July 2 post, Johnson expressed anger over lynchings of black people and ‘our ancestors’ being beaten, mutilated and killed.

‘Then they all stand around and smile while their picture is taken with a hung, burned and brutalized black person,’Johnson, 25, wrote.

‘They even go to our homeland and shoot our endangered wildlife for sport.’

Facebook has also allowed the creation of a fan page dedicated to Xavier Johnson to be set up following the Dallas shootings. Set up yesterday, the page accumulated over 600 “likes” from users in just three hours. It now stands at over 1,350 “likes.”

Facebook’s unwillingness to suspend pages and users promoting black supremacy and anti-police violence bears a stark contrast to their willingness so suspend conservatives. In the wake of the Orlando shootings, the social network leaped to ban pages run by Islam critic Pamela Geller, only restoring them after media pressure. The social network also suspended the pages of two gun stores shortly after the Orlando attacks.