R.C. Maxwell is a black Trump supporter and California GOP consultant who gained attention last year after he was assaulted at a Trump rally in August 2017. Maxwell was recently suspended from Twitter following an exchange between him and MSNBC host Jonathan Capehart discussing President Trump and the recent government shutdown. Capehart attacked Trump for failing to negotiate with Democrats.

Then perhaps President Trump should use his vaunted deal-making, negotiating skills to win over the necessary Democratic votes instead of running ads calling them "complicit" to murder. https://t.co/QSaCoNl8R0

Maxwell replied that Trump couldn’t “make deals with pouting politicians,” Maxwell also attempted to explain the government shutdown and why the Democrats were at fault. 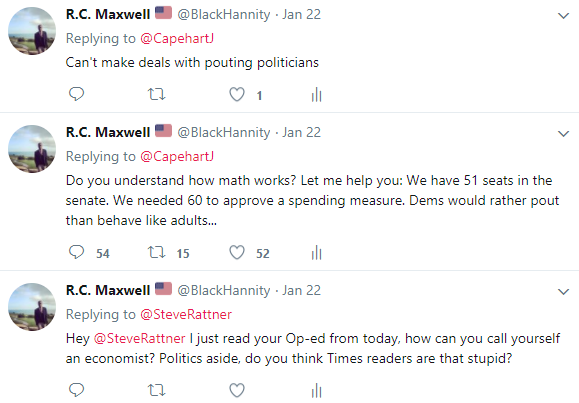 Shortly after a number of exchanges with Capehart, Maxwell was suspended from Twitter. Maxwell told Breitbart Tech that he was informed by Twitter that his account was suspended for “hateful conduct,” but refused to outline which of Maxwell’s tweets were considered “hateful conduct.” Maxwell told Breitbart Tech, “I reject racism and I’m not alt-right. I’m a conservative, I work for conservatives, I’ve called out the alt-right many times.”

Go coon somewhere else
We got no glitter biscuits over here

Right after you tell me why you’re praying to white Jesus and what made you decide to go full coon. 🙋🏾

Maxwell is still suspended from Twitter as of the publishing of this article.