Breitbart News reporter Warner Todd Huston was recently locked out of his Twitter account following his reply to a tweet published by the Independent. The Independent‘s tweet related to Sheila Jeffreys, an Australian academic and feminist who claims that transgender woman are not real women. Jeffreys described transgender rights movements as: “[One of many] internet exploited sexual fetishes that try to make themselves a rights movement.”

Jeffreys also stated: “When men claim to be women… and parasitically occupy the bodies of the oppressed, they speak for the oppressed.” Huston took issue with this, stating that he didn’t know if transgender people were “parasites” but does believe that they are mentally ill, a claim that is not uncommon with many psychological associations referring to the transgender condition as gender dysphoria.

There has been much debate about whether or not gender dysphoria is a mental illness, but it has been noted that those that suffer from gender dysphoria often have a multitude of other mental health problems. Many have argued that physical surgery is not the cure for gender dysphoria but rather psychological counseling is the best avenue of treatment. The British Psychological Society Research Digest states in an article relating to the number of mental health issues prevalent among transgender teens:

The issue of pre-existing or concurrent psychological vulnerabilities also speaks to the fact that a substantial proportion, perhaps even the majority, of children who experience some form of gender identity challenge, later come to endorse the gender they were raised as (further commentary and discussion); the new findings may also be relevant to the experience of detransitioning individuals, who reach similar conclusions, but often after a much greater investment in the process of transition – a phenomenon that is struggling to get scientific attention.

The issue of those that undergo physical surgery later regretting that surgery has become a growing issue. One psychotherapist, James Caspian, attempted to study the issue of transgender individuals “de-transitioning”  but was rejected from Bath Spa University after the ethics committee deemed the study unethical. The Guardian reports:

Bath Spa University is conducting an internal inquiry into claims that it turned down an application for research on gender reassignment reversal because it was “potentially politically incorrect” and would attract criticism on social media.

James Caspian, a psychotherapist who specialises in working with transgender people, proposed the research about “detransitioning” to the university in south-west England, which, he said, initially approved the application.

When he went back with his preliminary findings that suggested growing numbers of young people, particularly women, were regretting gender reassignment, Bath Spa said his proposal would have to be resubmitted to the ethics committee, which rejected it.

Following his comments relating to transgender individual suffering from mental illness, Breitbart News reporter Warner Todd Huston logged into his account a short while later only to find a notification telling him that he was locked out of his account unless he deleted the offending tweet. 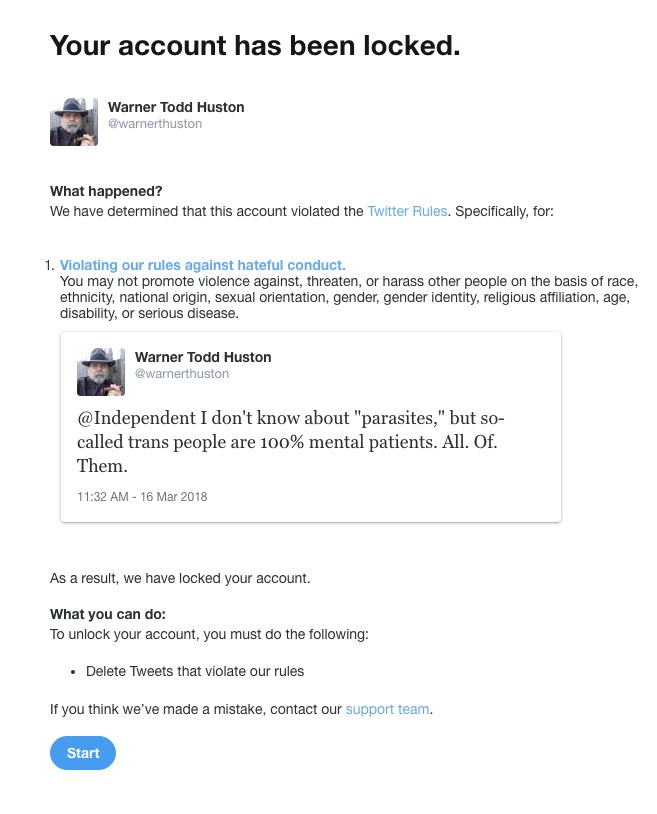 Huston commented on the account suspension saying: “The amusing thing is I was hit with the “delete or be banned” warning a full week after I posted it. But we have seen far worse from “celebrities” such as Cher and recently Tom Arnold and they have faced no warning from Twitter officials. Twitter seems to give wide latitude to liberals.”

Huston’s reference to Tom Arnold relates to the actor’s recent comments about conservative commentator Candace Owens. Arnold replied to a tweet by Owens saying: “That’s a lot of extra words @RealCandaceO so you can suck racist d**k by trying to insult an actual hero @ShaunKing hahahaha. #MAGA.” Owens summed up her opinion of people such as Arnold in a tweet stating: “None of you white men own my blackness.”

The individuals depicted in this video were speaking in a personal capacity and do not represent or speak for Twitter. We deplore the deceptive and underhanded tactics by which this footage was obtained and selectively edited to fit a pre-determined narrative. Twitter is committed to enforcing our rules without bias and empowering every voice on our platform, in accordance with the Twitter Rules.

Twitter then claimed that they do not shadowban accounts but they do downrank them:

Twitter does not shadowban accounts. We do take actions to downrank accounts that are abusive, and mark them accordingly so people can still to click through and see this information if they so choose… This makes content less visible on Twitter, in search results, replies, and on timelines. Limiting tweet visibility depends on a number of signals about the nature of the interaction and the quality of the content.

Last year, a number of conservative accounts across Twitter were deleted or unverified, seemingly without reason:

Twitter just emailed me to tell me they are removing my "verified badge" because they claim my account "doesn't comply with Twitter's guidelines for verified accounts."

You should start by being honest. Verification has never been about authenticating identity, has always been about choosing winners & losers

This mistake from day one has been to politicize the verification process I️ the first place with people like Milo and Assange https://t.co/gEwsk7de5E