Facebook is relying on a “fact checker” that uses “expert opinion” from a researcher who conducted projects with the Wuhan Institute of Virology, the biolab next to the wet market in Wuhan where the Chinese virus originated.

An article from the “expert,” Danielle E. Anderson, an assistant professor at Duke-NUS medical school, was used by Facebook to fact-check a video from the Epoch Times suggesting the Institute, which is located at the original epicenter of the now-global pandemic, as one of the possible origin points.

You cannot make it up.
The "fact checker" Facebook is using to censor a documentary discussing possibility that corinavirus came from Wuhan lab… is scientist who worked at Wuhan lab with Chinese communists.
Honestly, folks. pic.twitter.com/Tqk155S3DD

This is not a fringe claim — CNN reports that the U.S. intelligence community is currently investigating the same laboratory as the possible source of the outbreak. The same thread of investigation that got ZeroHedge banned from Twitter in late January is now being looked at by the U.S. government and reported on by the mainstream media.

Mark Milley, Chairman of the Joint Chiefs of Staff, said that the intelligence community is taking a “hard look” at the question of whether the Chinese virus originated in a lab.

Nevertheless, for suggesting the same theory, Facebook has relied on a “fact checker” who has a conflict of interest — someone who has conducted collaborative projects with the Wuhan Institute of Virology, and whose reputation would be harmed by her connection to it if the virus were found to have originated there. 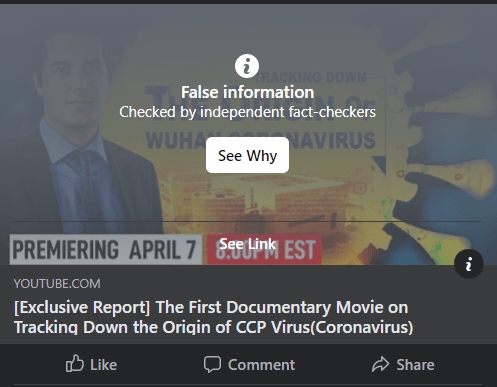 In Anderson’s “fact check” of the claim, she writes:

“I will disclose that I am a scientist trained to work in high containment and have collaborative projects with the Wuhan Institute of Virology (WIV). I have worked in this exact laboratory at various times for the past 2 years. I can personally attest to the strict control and containment measures implemented while working there. The staff at WIV are incredibly competent, hardworking, and are excellent scientists with superb track records.”

You can watch the documentary that Facebook is “fact checking” with Wuhan-linked researchers for free on YouTube: