Tuscon sportscaster Paul Cicala deleted his Twitter account after receiving blowback on social media on Thursday night for his tweets suggesting that a supporter of Republican presumptive nominee Donald Trump who was assaulted by protesters provoked the attack by pointing “to her Trump shirt.”

Cicala’s tweets were in response to the images and video tweeted by NBC’s Jacob Rascon showing a Trump supporter being assault after Thursday’s rally in San Jose, California:

Woman who supports Trump surrounded by protesters, who taunt her, then throw eggs and bottles at her. pic.twitter.com/nHJ3cgYOfR

Watch: The moment a Trump supporter, surrounded by protesters, is egged in the face, hit by other food. pic.twitter.com/qYFdwJWvrS

Cicala, who works for Tuscon’s NBC affiliate KVOA, responded with the following tweets, which were later deleted along with his entire Twitter account: 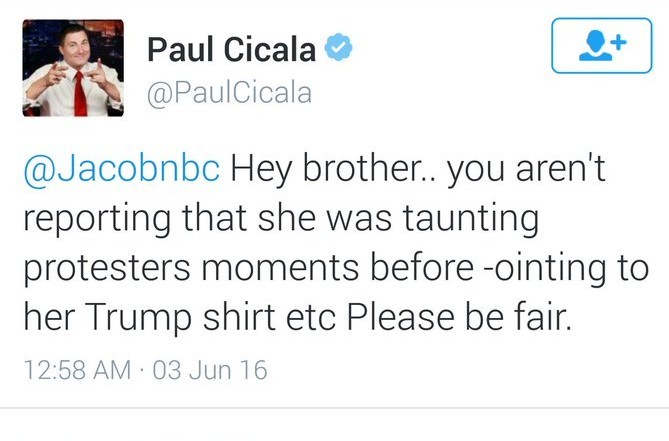 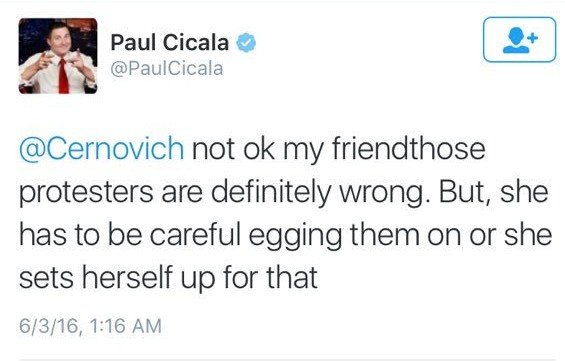 As of press time, there seems to be no mainstream media reports of Cicala’s blaming the victim for her own assault, aside from Mediaite and a few others.