Forty-three years before Rolling Stone depicted Boston Marathon bomber Dzhokhar Tsarnaev on its cover in his best boy-band, Tiger Beat pose, the magazine portrayed an upward-gazing Charles Manson as a visionary wiseman below its nameplate.

The 30,000 words that followed included a friend’s observation that “Charlie is very Christ-like and has a Christ-like philosophy,” and an interview with Manson containing the question, “What makes you such a hot lover?” 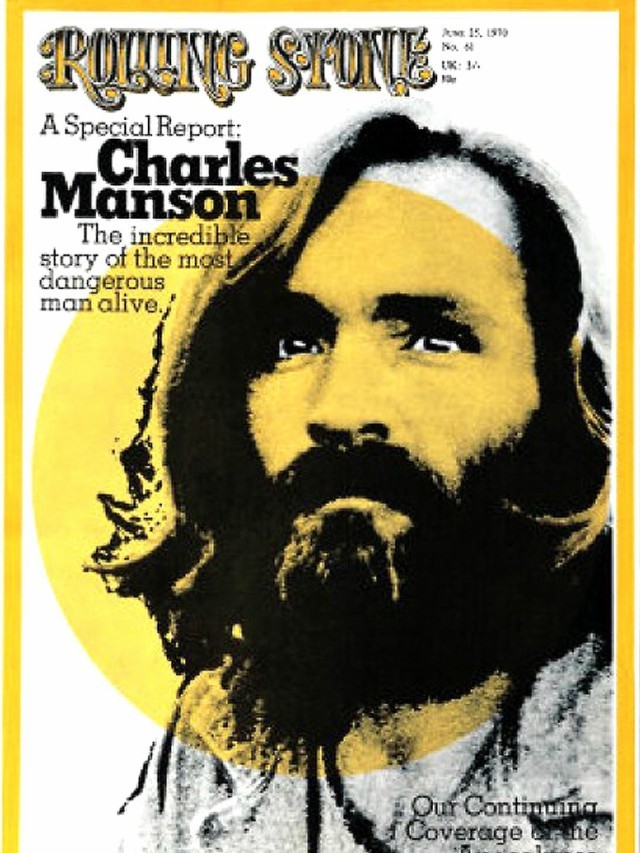 Though more even-handed than other fawning accounts in the underground press, Rolling Stone repeatedly cast Manson and his misfit followers in sympathetic light. An implicit comparison is made, by Manson and the authors, to the Chicago Seven defendants. Manson, readers glean, is one of us, part of the counterculture rebelling against the corrupt mainstream. Authors David Felton and David Dalton wrote:

• “The press likes to put the Manson family in quotation marks – ‘family.’ But it’s a real family, with real feelings of devotion, loyalty and disappointment. For Manson and all the others it’s the only family they’ve ever had.”

• “Clearly Charles Manson already stands as the villain of our time, the symbol of animalism and evil. Lee Harvey Oswald? Sirhan Sirhan? Adolph Eichman? Misguided souls, sure, but as far as we know they never took LSD or fucked more than one woman at a time.”

• “The society may be disgusted and horrified by Charles Manson, but it is the society’s perverted system of penal ‘rehabilitation,’ its lusts for vengeance and cruelty, that created him.”

The article did not much doubt that Manson’s crew killed more than a half dozen people. They just could not say that this made them guilty.
The magazine praised the logic of Manson laying the blame at society for the sins of its children:

The fiction is in the assigning of guilt to one party, even the isolation of one crime, within a society that perpetuates itself through both mental and physical violence.

Justice can be done only if the jury could consist of everybody in society so the court can expose all the connections between all events simultaneously. Since this is a physical impossibility except through electronic media, the court must proceed as if events took place isolated from the society in which they took place, and once that fiction has been established, it is easy to find villains in individuals.

By accepting this without question, our legal system is guilty of just what Manson claims: It is a form of theater in which real victims are found for sacrifice. And if we have allowed our legal system to become theater, we are already in the area of magic.

Yes, and colors make the most amazing sounds and numbers taste delicious. The piece, marinated in the times and showing evidence of going Spahn Ranch native, won a Columbia School of Journalism Award for its Manson interview, which, strangely, never bothers to touch on the crimes that put Manson on the cover of the magazine. The interview asks him about his philosophy, his music, his prophecies. The questions never mention Sharon Tate, Rosemary LaBianca, Gary Hinman, or anybody else murdered by Manson and his followers.

Forty-seven-years ago, that won an award.