Videos of the obnoxious moments, including one from the Washington Post, went viral, leading Bowser, a Democrat, to declare:

What I saw in those videos was highly inappropriate, it was likely against the law if they were on private property but more importantly, I don’t think it had anything to do with demands for social justice.

Bowser’s comments inspired C.C. Pecknold, a professor at the Catholic University of America, to tweet slyly, “The internal polling must be really bad.” Pecknold was referring, of course, to the growing realization, reinforced by survey data, that the Democrats’ soft-on-rioters stance is starting to erode their chances in the November balloting. In fact, already on August 13, the Pew Center found that 59 percent of Americans said that crime was a “very important” issue in 2020.

Since then, of course, the crime situation has worsened, as Kenosha has gone up in flames, while Democrat politicians have done little, or even, seemingly, encouraged the rioters—here’s looking at you, Wisconsin Gov. Tony Evers. Moreover, it’s becoming clear that this lenience toward crime could hurt the entire Democrat ticket. 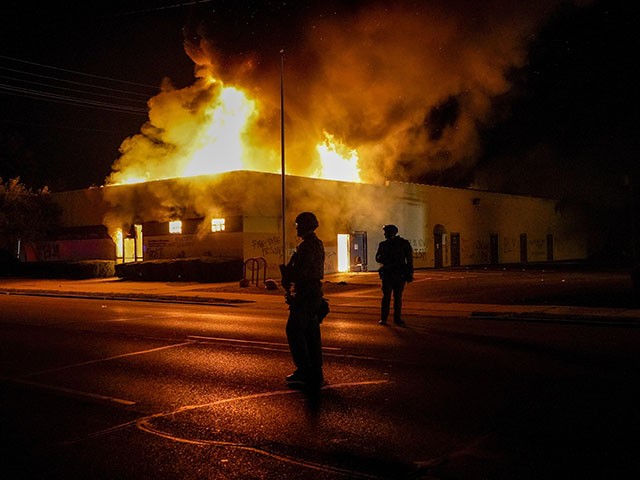 Police stand near a department of corrections building that was set on fire during protests, August 24, 2020, in Kenosha, Wisconsin. (Morry Gash/AP Photo) 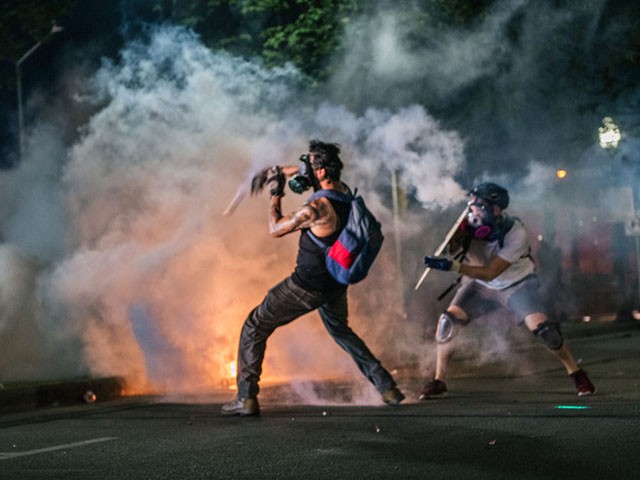 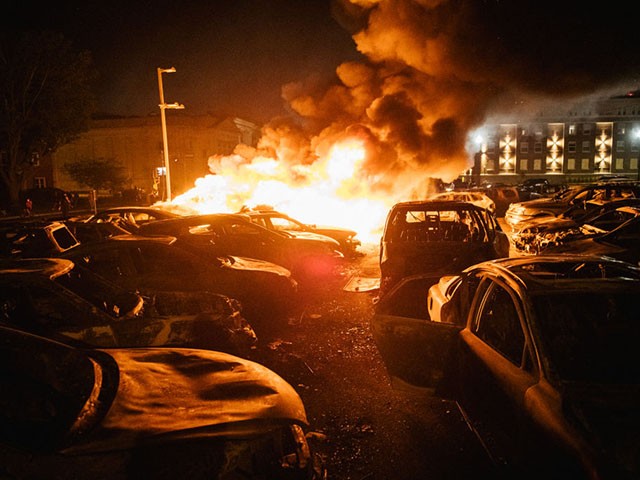 Cars are set on fire in a used car lot on August 24, 2020, in Kenosha, Wisconsin. (Brandon Bell/Getty Images)

Indeed, even Democrats’ best friends in the Main Stream Media are starting to get, and share, that message of concern. As CNN anchor Don Lemon told Chris Cuomo on August 25, “Kenosha is a Rorschach test for the entire country. I think this is a blind spot for Democrats. I think Democrats are hoping this will go away, and it’s not going to go away.”

The CNN man’s words of warning might lead one to conclude that Lemon, as well as Bowser, has seen warning-flag survey numbers. In fact, that’s exactly what Lemon said: “I know it’s showing up in the polling, it’s showing up in focus groups. It is the only thing right now that is sticking.”

Interestingly, Lemon didn’t always worry about rioting. Just three months ago, Breitbart News reported that he described the riots as a “mechanism” for the needed “restructuring” of the country. As he said on May 30, “Perhaps this is some sort of mechanism for a restructure in our country or some sort of change in our country for us to deal with whatever we need to deal with in this country as we look at pictures on the right of burning and pictures on the left of looting.”

Yet now, it seems that too many pictures of burning and looting have taken their toll on the Democrats’ standing. An August 26 poll from Milwaukee’s Marquette University found support for Black Lives Matter in the Badger State to be tumbling. These findings led liberal journalist Jonathan Chait to observe, “Democrats need to be extremely concerned about what’s happening in Wisconsin, where support for BLM has gone from +25 to +0 in 2 months.”

In the meantime, Meghan McCain, definitely not a Trump fan, tweeted Lemon’s September 25 comments and added her own assessment:

Everything @donlemon said here is accurate. This is the one issue that could really turn the election against Biden and is showing up in the polling – all leaders have to come out forcefully and unequivocally against violence and looting.

And journalist Matt Lewis, another non-fan of Trump, sighed, “This is how Trump wins.”

Indeed, Republicans, sensing the political opportunity, are piling on. In his Wednesday night speech to the Republican convention, Vice President Mike Pence was firm as he added yet another city to the list of Democrat urban war zones: “Let me be clear: The violence must stop, whether in Minneapolis, Portland, or Kenosha . . . We will have law and order on the streets of this country for every American of every race and creed and color.”

Then Pence zeroed in on the nation’s top Democrat: “Joe Biden says America is ‘systemically racist,’ and that law enforcement in America has a quote ‘implicit bias’ against minorities.” Continuing, Pence added, “The hard truth is, you won’t be safe in Joe Biden’s America.” By contrast, “Under President Trump, we will stand with those who stand on the Thin Blue Line.” And Pence’s words were bolstered by others speaking at the convention, including Donald Trump Jr., Rep. Jim Jordan, and Rep. Dan Crenshaw.

In the face of this Republican onslaught, the MSM is realizing that its familiar mantra, that these are just “peaceful protestors”—with, okay, just a little bit of arson and violence—is wearing thin.

Thus the new MSM mantra is to warn the Democrats; hence this warning-siren headline in the New York Times: “How Chaos in Kenosha is Already Swaying Some Voters.” As the Times put it, “As residents see fires and looting, some worry that local Democratic leaders are failing to keep control of the situation.” We can pause to observe that the newspaper is putting the onus on local, as opposed to national Democrats. It seems that Wisconsin’s Democrat governor might be expendable, but not, of course, the Democrat presidential nominee.

In fact, that same day, August 27, Politico went further, connecting the burning of Main Street to the incineration of Democrats’ hopes for 1600 Pennsylvania Avenue; the headline on its piece bannered, “It’s playing into Trump’s hands’: Dems fear swing-state damage from Kenosha unrest.” The article, datelined from the embattled Wisconsin city, detailed, “As this battleground state grapples with social unrest, some Democrats fear that the looting and rioting and clashes are feeding Trump’s argument that this is what life would be like under the so-called radical left.”

So we can see: Reasons for Democrats to afraid, very afraid, are mounting. As CNN’s Lemon said on the 25th, referring to Biden’s quiet position vis-a-vis the rioters, “He’s got to address it.” Yet then Lemon added something revealing: He suggested that the former vice president might not, in fact, be willing to address the riots in a meaningful way: “I think maybe Joe Biden may be afraid to do it. I’m not sure.”

Indeed, Biden has been hesitant to say much of anything except, maybe, to blame the police. On August 24, he posted on Facebook declaring, “This morning, the nation wakes up yet again with grief and outrage that yet another Black American is a victim of excessive force. This calls for an immediate, full and transparent investigation and the officers must be held accountable.” Here we can see the Gov. Tony Evers-ish presumption that the police are the bad guys, that they used “excessive force.” Then Biden added this hat-tip to the far left: “We must dismantle systemic racism. It is the urgent task before us.”

Such words will reassure the left wing of the Democrat Party, which has regarded Biden as too “moderate.” And yet Team Biden is now being warned that it can’t win with just the left, and that rhetoric that puts the burden, even the outright blame, on the cops isn’t going to help his cause.

Indeed, in the midst of this fiery new crime wave, the betting odds on the election, while still favoring Biden to win, have narrowed sharply, from a margin of +24 on August 5 to just +8 on August 27.

Seeming to sense his vulnerability, on August 28 Biden gave his riot-messaging another try, adding a video statement on Facebook in which he said, “Needless violence won’t heal us. We need to end the violence—and peacefully come together to demand justice.” Those words can be read as a gentle reproach to the rioters in Wisconsin, and maybe even the shouters and screamers in D.C., although, of course, it doesn’t mention either by name. Biden just can’t seem to bring himself to condemn the rioters.

If we were inclined to, we could sympathize with Biden. He’s the man atop an increasingly left-wing party, trying to win a national election in a centrist country that worries, more and more, about crime and unrest. And so Biden is, well, tongue-tied, because whatever he says on the subject will antagonize some group of listeners.

So that’s why Biden seems happy saying as little as possible about the rioting. Indeed, he seems happy not saying much of anything.

That yearning for the sound of silence might explain why House Speaker Nancy Pelosi, a close Biden ally, suggested on the 27th that Biden not debate President Trump, which would undo a presidential campaign tradition going back to 1976. For his part, Biden has said that he looks forward to debating Trump, and yet he has hinted at odd pre-conditions, such as demanding the onstage presence of a “fact-checker,” which suggest that maybe he’s not so eager, after all, to debate the incumbent president. So perhaps there’s some complicated maneuvering going on here, as Pelosi sends up trial balloons to see what might be politically feasible. In any case, in campaign terms, it’s a long time between now and the first scheduled presidential debate, on September 29.

So this seems to be the strategy from Team Biden: Say as little as possible, period. In fact, in quiet times, such quietude might have been a plausible plan for the Democrats; that is, if Biden is in the lead, let him sit on that lead, quietly, between now and November 3.

Yet these are tempestuous times; the plain reality is that the rioting requires a loud and robust response; Americans want to hear from both presidential candidates as to their plan to restore law and order. (Having, say, D.C.’s full-throated mayor, Muriel Bowser, substitute for Biden in the debates will not suffice, and probably not even Kamala Harris.)

The fact is, Joe Biden is going to have to speak for himself on the key issue of keeping the streets of America safe. And that’s a reality that threatens to really bite the Democrats over the next ten weeks.