The anti-communist newspaper Epoch Times denounced this weekend the arrest of Luka Binniyat, a reporter for the publication based in Nigeria who focused on Christian persecution there at the hands of Fulani jihadists.

Binniyat has been active as a representative of civil society in his native Kaduna state for years and previously wrote for Vanguard, one of Nigeria’s largest newspapers. The last article he published at the Epoch Times, “In Nigeria, Police Decry Massacres as ‘Wicked’ but Make No Arrests,” Binniyat quoted local lawmakers condemning the government of President Muhammadu Buhari for failing to act to protect Christians in areas that Fulani jihadists target.

The Epoch Times covers global affairs but has most often faced criminal attacks or police pressure for its coverage of China. The newspaper’s Hong Kong offices have suffered multiple attacks, including arson, presumably in response to its support for the anti-communist democracy movement that erupted there in 2019.

The Chinese Communist Party has developed close ties to Nigeria through its “Belt and Road” colonization initiative, but no evidence currently suggests Beijing played a role in Binniyat’s detention.

The Fulani jihadists, often referred to as Fulani herdsmen, have terrorized Christian communities in north-central Nigeria for years. While some observers suggest that the violence began as tension between the mostly-Muslim Fulani herdsmen and mostly-Christian farmers in Kaduna and neighboring states, in the past decade, it has erupted into a campaign of jihadist persecution against any Christian communities that the attackers consider present in the territory they consider theirs. In 2018, death tolls found the Fulani herdsmen deadlier than Boko Haram, the jihadist organization affiliated with the Islamic State that is most active in northeastern Borno state. 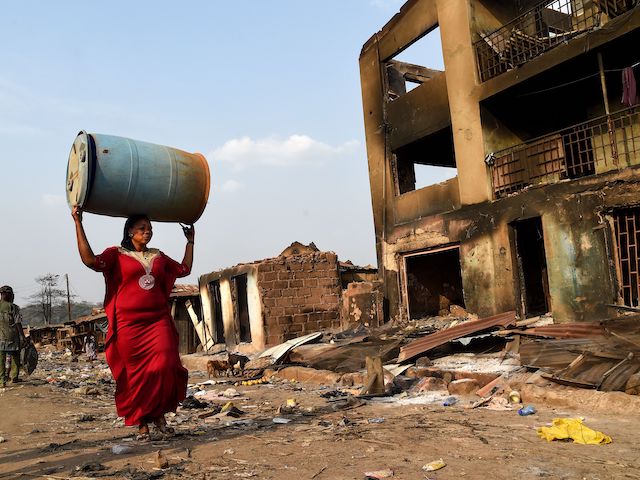 A woman carries a plastic drum salvaged from a burnt shop after deadly ethnic clashes between the northern Fulani and southern Yoruba traders at Shasha Market in Ibadan, southwest Nigeria, on February 15, 2021. (Pius Utomi Ekpei/AFP via Getty Images)

Fulani attacks often involve the burning down of entire villages, hacking civilians to death with machetes, and other atrocities.

Buhari, an ethnic Fulani himself who became president in 2015 after a stint as military dictator in the 1980s, won the election that year by vowing to eradicate Boko Haram. Buhari has done little since, however, to deter jihadist assaults in the north of the country.

Police detained Binniyat, according to the Epoch Times, on November 4, and have yet to charge him with any crime. The newspaper cited a friend, Reuben Buhari, who said that he believes police will charge him with the crimes of “injurious falsehood and incitement,” likely in response to his coverage of Fulani terrorism in the newspaper. Buhari said he believed formal charges would drop on Monday. 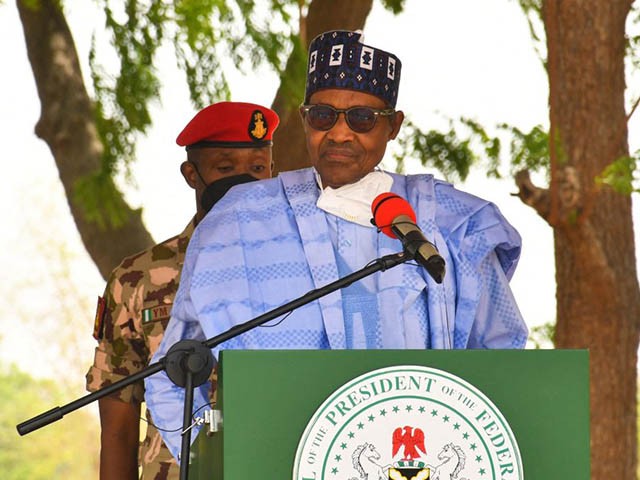 Nigerian President Muhammadu Buhari speaks during a visit to the Maimalari Barracks in Maiduguri on June 17, 2021. (Audu Marte/AFP via Getty Images)

Binniyat’s last article before his arrest detailed the silence of federal government officials in response to the mass killing of dozens of Christians in Kaduna at the hands of Fulani terrorists. Kaduna Senator Danjuma Laah accused the Buhari government in the article of covering up a “genocide” by dismissing the attacks as a “clash” – a term that would imply the Christians were also engaging in violence, for which no evidence exists.

“If it is a clash, why were no herdsmen among those killed and injured?” Sen. Laah asked in the article.

Binniyat himself described the latest Fulani attack in the text as a “brutal murder by a militia armed with assault rifles.”

Nigeria is the ideal dream for opportunists, rogues in govt, con artists and crooks of all kinds of shades. The best, the upright and productive minds service the aforementioned as 'workers' or assistants.
That's a Prof of law is deputy to WAEC cert forger.
Shame!

In addition to accusing the government of turning a blind eye to the mass murder of Christians and allowing crime to thrive in the country, he identified and named wealthy Nigerians on his social media account, in one instance, accusing a woman of “serially abusing” domestic help and publishing videos showing the alleged victims’ scars.

This is Janet, a preteen house help to Mrs Ldutsi Yusuf, an FRSC officer in KD
The madam is said to be an arrogant relations of Babachir, whose names she throws around to intimidate neighbours. She & her kids have been serially abusing Janet, including this.#JusticeForJanet pic.twitter.com/QHZ8uHtKXh

“The recent arrest of Luka Binniyat—after he reported on the massacres for an American media outlet—continues a systematic government cover-up of Fulani atrocities against peaceful Christian villagers,” the Hudson Institute’s Nina Shea told the Epoch Times in response to his arrest. “This is further evidence that an ethnic-religious genocide is being carried out in northern Nigeria and is being done so with official collusion.”

Binnayat was previously arrested in 2017 for “injurious falsehood” for an article in Vanguard covering the mass killing of students at the College of Education, Gidan-Waya.

His current publication has also struggled in hostile settings, most prominently in response to its coverage of China. In 2019, at the height of the anti-communist protests in Hong Kong, unidentified attackers attempted to burn down the Epoch Times printing house, presumably to prevent it from publishing new editions. Two years later, after China imposed an illegal “national security law” on the autonomous region, unknown attackers again targeted the newspaper, breaking into its offices with sledgehammers and destroying a significant amount of its workspace.

Also that year, unidentified attackers assaulted Epoch Times journalist Sarah Liang on the streets of Hong Kong, an incident similar to what anti-communist activists had endured in the city.