South African President Cyril Ramaphosa tested positive for an undisclosed strain of the Chinese coronavirus Sunday and was presenting “mild symptoms” of illness as of Monday, Reuters reported.

“President @CyrilRamaphosa appreciates the well wishes he is receiving from various quarters following his COVID-19 [Chinese coronavirus] positive result,” the office of the South African presidency wrote in a Twitter statement posted December 13.

“The President remains in good spirits and continues to present with mild symptoms,” the statement read.

Ramaphosa’s ongoing infection “is causing him to delay a vaccine booster shot which he was scheduled to receive this week,” his office revealed in a separate Twitter statement posted December 13. The office did not specify the brand or type of vaccine he was to receive as a “booster” shot, which is an additional dose of a vaccine after completion of a full vaccine series.

The South African leader was fully vaccinated against the Chinese coronavirus when he tested positive for the disease on December 12.

“Ramaphosa, who was given Johnson & Johnson’s vaccine in February, tested positive the same day that he addressed a state memorial to the last leader of South Africa’s white minority government, FW de Klerk, in Cape Town,” according to Reuters.

Johnson & Johnson’s Chinese coronavirus vaccine is a single-dose shot. It works by injecting “a piece of a modified virus that is not the virus that causes COVID-19 [Chinese coronavirus]” into a recipient, according to the U.S. Centers for Disease Control and Prevention (CDC).

“This modified virus is called the vector virus … [which] gives instructions to cells in the body to create an immune response,” the CDC explained in October.

“This response helps protect you from getting sick with COVID-19 [Chinese coronavirus] in the future,” the U.S. public health agency wrote. 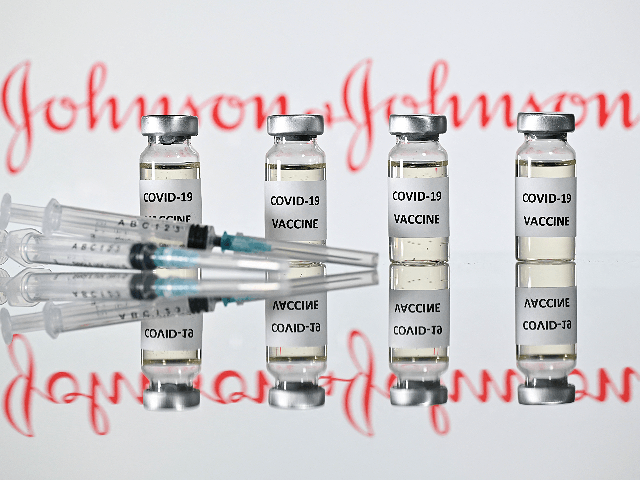 An illustration picture shows vials with Covid-19 Vaccine stickers attached and syringes with the logo of US pharmaceutical company Johnson & Johnson on November 17, 2020. (Photo by JUSTIN TALLIS/AFP via Getty Images)

Scientists in southern Africa discovered a new variant of “Covid-19” called Omicron in mid-November. Doctors first detected Omicron in Botswana and then in the neighboring country of South Africa in subsequent days, but the Netherlands and Belgium have since revealed that they had samples testing positive for Omicron dating to before the South African officials alerted the World Health Organization (W.H.O.) to their discovery.

“The first cases of the variant were collected in Botswana on 11 November, and the earliest in South Africa was recorded three days later,” the Guardian reported on November 24.

Omicron is the latest variant of “Covid-19,” which is the disease caused by a type of coronavirus named SARS-CoV-2. “Covid-19” is also known as the Chinese coronavirus.

Recent data out of southern Africa suggests Omicron may be more contagious than Delta, which was the latest dominant strain of “Covid-19” prior to Omicron’s discovery. The data suggests Omicron is “efficiently transmitting, and probably more efficiently transmitting even than the Delta variant,” Michael Ryan, the executive director of the W.H.O.’s Health Emergencies Programme, told reporters at a press briefing on December 8.

Delta was first detected in India in December 2020 and is currently the most prevalent strain of SARS CoV-2 worldwide. The variant “is believed to be more than twice as contagious as previous variants,” Yale Medicine noted on November 19. Delta has notoriously caused a significant number of “breakthrough” infections, or cases of “Covid-19” in people fully vaccinated against the disease.

A new study published on December 13 by Oxford University found that Omicron, like Delta, may also penetrate the immunity of people fully vaccinated against the Chinese coronavirus.

“Researchers from the University of Oxford tested blood samples of people 28 days after their second dose of either the Oxford-AstraZeneca or Pfizer-BioNTech vaccine,” CNBC reported.

“When omicron was introduced to those samples, scientists reported ‘a substantial fall’ in the neutralizing antibodies that fight off Covid compared to the immune responses seen against earlier variants,” the news site relayed.

Some vaccine recipients tested in the study “failed to neutralize [the virus] at all,” according to the Oxford University scientists.

“This will likely lead to increased breakthrough infections in previously infected or double vaccinated individuals, which could drive a further wave of infection, although there is currently no evidence of increased potential to cause severe disease, hospitalization or death,” the study’s authors wrote.

It remains unknown which variant of the Chinese coronavirus South African President Ramaphosa contracted on December 11.