The government of Saudi Arabia confirmed on Tuesday that Chinese dictator Xi Jinping will travel to the country to attend two summits from December 7 to 9, Xi’s third trip abroad since the pandemic and his furthest away from home.

According to the Saudi Ministry of Foreign Affairs, Xi will meet with senior Saudi leaders and attend two summits, a pan-Arab summit and Gulf state summit, meant to expand cooperation in economics and development.

Xi’s visit will conclude what was a tumultuous year in relations between Saudi Arabia and the United States, defined by a disastrous visit by leftist President Joe Biden to Jeddah to meet with Crown Prince Mohammed bin Salman. Biden had campaigned on a promise to turn Saudi Arabia into a “pariah” state after the gruesome killing and dismemberment of Washington Post journalist Jamal Khashoggi but abandoned that promise as skyrocketing gasoline prices threatened Democrats’ prospects in November’s midterm elections. The White House ultimately admitted that it had requested Saudi Arabia not cut oil production until after the election, a request Riyadh denied.

Last month, the Biden administration requested immunity for the crown prince, known popularly as MBS, in a lawsuit related to the Khashoggi killing, which occurred in the Saudi consulate in Istanbul, Turkey. The move prompted widespread condemnation as it appeared to contradict Biden’s “pariah” promise – yet the Saudi government has appeared to maintain a distance from the Biden administration as a result of insults on the part of Biden officials accusing Riyadh of aiding Russia in its invasion of Ukraine.

China is the world’s most prolific oil importer and America’s top geopolitical foe, elevating the significance of Xi’s visit to Saudi Arabia in the context of growing conflict with Washington.

The Saudi announcement of Xi’s visit emphasized economic cooperation. The Ministry of Foreign Affairs stated that Xi would visit “to strengthen the historical relations and the distinguished strategic partnership that unites the Kingdom of Saudi Arabia and the People’s Republic of China.” It noted that King Salman invited Xi to visit.

Upon the invitation of the Custodian of the Two Holy Mosques @KingSalman, the President of the People's Republic of China visits the Kingdom of Saudi Arabia from December 7-9, 2022. pic.twitter.com/LOgVWxqZN9

The Saudi ministry’s announcement occurred after the Chinese Foreign Ministry held its daily press briefing, where spokeswoman Mao Ning refused to answer questions on any potential visit. The trip appeared to be in the works for some time, however, as India’s NDTV reported that the Saudi government “sent out registration forms for reporters to cover the summit, without confirming the exact dates,” last week.

“Our meeting today comes at an important time, as it precedes the expected visit of the Chinese president to the kingdom,” Prince Faisal said during a joint press conference in his country with visiting Chinese Foreign Ministry Wang Yi at the time.

Rumors of a Xi Jinping visit to Saudi Arabia began in August, though reports indicating such a visit at the time went unconfirmed.

While the Chinese government has not addressed Xi’s attendance at the two summits in Saudi Arabia, Chinese state media published two articles this week promoting the events as a chance for China to expand its influence in the Middle East.

“China will take the upcoming summit between China and Arab states as an opportunity to carry forward traditional friendship, deepen cooperation in all areas, step up exchanges between respective civilizations, and build a China-Arab states community with a shared future in the new era,” the state-run Global Times propaganda newspaper asserted on Monday, citing the Chinese Foreign Ministry.

The Global Times noted that Saudi Arabia had been drifting way from American influence throughout the Biden administration along with one of its closest allies, the United Arab Emirates (UAE).

“In terms of geopolitics, Saudi Arabia and the UAE currently believe that the US has no right to dictate to Gulf countries how they should proceed under any circumstances, and that they can solve regional problems without the US and pursue independent policies within the framework of OPEC+,” the state publication claimed.

“China’s construction programs, including the building of bridges, roads, hospitals, as well as trade, have brought more and more benefits to the local people in Arab world,” the Global Times claimed. “Under the framework of the BRI, China has deeply participated in the infrastructure construction of Saudi Arabia, Egypt, Qatar, the United Arab Emirates, Algeria and other countries.”

“In their long-term interactions with the Western countries, Arab countries have become tired of the condescending arrogance of the West,” the Global Times claimed. “Just as Saudi Arabian Crown Prince Mohammed bin Salman said when he met with US President Joe Biden in July – the only way we’re going to work together is if we respect each other, and that includes countries respecting each other’s values and sovereignty.”

Biden’s fateful visit to Saudi Arabia in July – dubbed the “fist-bump summit” due to an enduring image of Biden offering MBS such a greeting – reportedly exacerbated tensions already present when the two had not met in person. Biden insisted prior to visiting that he was not doing so to ask for Saudi help to lower oil prices but never quite explained what the objective of the visit was. 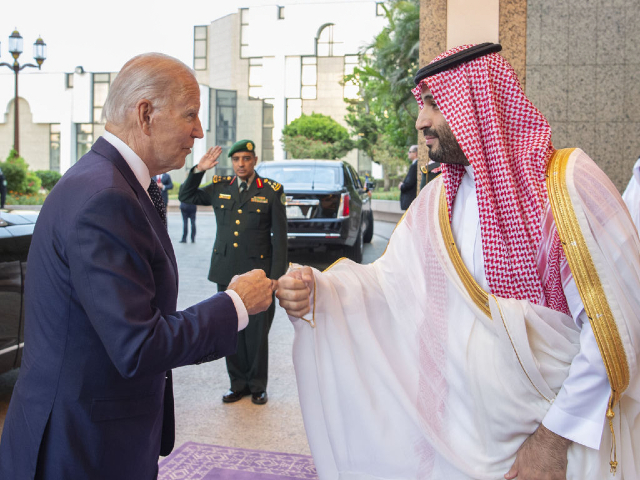 Following the meeting, reports surfaced that Biden had struck a deal with MBS in which Saudi Arabia promised to support increasing oil production. Instead, in October, OPEC+ – an extension of the OPEC oil cartel that includes Russia – agreed to cut production by 2 million barrels a day, dramatically increasing prices. The Biden administration responded to the move by accusing the Saudis of helping Russia generate more funds to continue its onslaught against Ukraine, weeks after MBS had personally intervened to facilitate a prisoner swap benefiting the Ukrainians. Ukrainian President Volodymyr Zelensky personally called MBS and made a public statement thanking him for his support in the immediate aftermath of Biden officials accusing the Saudis of helping Russia.

The Saudi government, in turn, responded formally by expressing outrage and deep offense at the Biden administration’s comments. Informally, anonymous reports in newspapers such as the Wall Street Journal began surfacing claiming that MBS did not respect Biden and often ridiculed his lack of “mental acuity” in front of his officials.

Chinese state media openly laughed at the Biden Saudi trip in the summer, calling it “fruitless” and “embarrassing.”