Four Republican lawmakers sent a letter this week to the heads of Customs and Border Protection and Homeland Security expressing concern that the Inflation Reduction Act may encourage companies to import solar panels to America made in China by Uyghur slaves.

Encouraging importing solar panels and other “green” energy products from China could result, they write, in companies violating the Uyghur Forced Labor Prevention Act (UFLPA), a law that tasks Customs and Border Patrol (CBP) with preventing the importing of products from occupied East Turkistan on the grounds that anything made there is presumed to be the product of Uyghur slavery. Importers can override the presumption that products from the region, which China calls the Xinjiang Uyghur Autonomous Region (XUAR), with proof that the specific items they are trying to bring into America were made by paid, unforced laborers.

Congress passed the “Inflation Reduction Act” in August. Despite its name, the mammoth bill provides from $700 billion in inflationary spending, including large subsidies for renewable energy and other “green” projects to presumably fight climate change. When it passed, a study by the University of Pennsylvania’s Budget Model found that, at best, the “Inflation Reduction Act” would reduce inflation by 0.1 percent in five years. 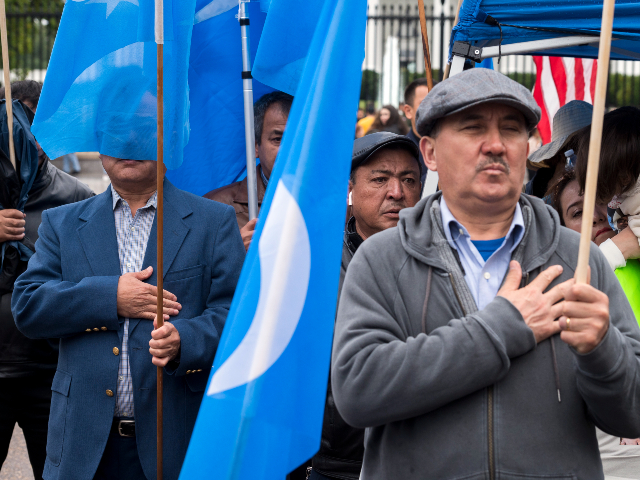 Members of the East Turkistan Awakening Movement sing the East Turkistan national anthems while holding a rally outside the White House against the Chinese Communist Party (CCP) to coincide with the 73rd National Day of the People’s Republic of China in Washington, Saturday, Oct. 1, 2022. They protest against alleged oppression by the Chinese government against Uyghurs and other mostly Muslim ethnic groups in far-western Xinjiang province. China’s government has been accused of human rights abuses against Uyghurs and other predominantly Muslim minorities in the region. (AP Photo/Cliff Owen)

The potential for the green subsidies in the bill funding the Chinese government, and Chinese slave labor in particular, was a subject of debate in the time prior to the law’s passing. In response to concerns, the Inflation Reduction Act included tax incentives for American companies to increase domestic production of solar panels, lithium batteries for electric vehicles, and other similar technology.

China is currently engaging in a genocide campaign against ethnic Uyghurs, Kazakhs, the Kyrgyz, and other Muslim-majority indigenous peoples of East Turkistan. In addition to mass sterilization, internment in concentration camps, torture, and live organ harvesting, the Communist Party is believed to have enslaved thousands of victims. Some concentration camp survivors have testified to the sites including slave labor facilities. Other evidence of slavery includes widespread advertisements selling Uyghur slaves to factories all across China.

“Under the IRA, U.S. taxpayers will likely pay tens of billions of dollars in subsidies, grants, and tax credits for solar panels,” the lawmakers noted in their letter, addressed to acting CBP Commissioner Troy Miller and Secretary of Homeland Security Alejandro Mayorkas.

“Absent vigorous oversight however, this funding it is likely to go directly toward subsidizing the Chinese Communist Party’s (CCP’s) forced labor apparatus that produces a vast majority of solar panels in the PRC [People’s Republic of China],” the letter continued. “Strictly enforcing existing US laws to prevent American support for Uyghur forced labor is all the more important now given the recent protests in China catalyzed by a fire in Urumqi, Xinjiang following the CCP’s brutal treatment of its citizens.”

“The People’s Republic of China (PRC) now accounts for over 80% of every stage of the solar panel manufacturing process, such as polysilicon production, and accounts for 97% for wafers,” the letter noted. “Given the PRC’s dominance of the solar industry, IRA solar subsidies, grants, and tax credits could be used extensively on Chinese solar panels and solar panel components.”

“We are deeply concerned that the American taxpayer will be subsidizing the CCP’s solar industry and therefore subsidizing forced labor and human rights abuses,” it continued.

While the UFLPA bans imports from East Turkistan unless the importer can prove the products are not tainted by slavery, the senators and Congressmen suggested that, in the case of solar panels and other green energy, CBP should consider banning such products from anywhere in China:

Most Chinese polysilicon products are therefore potentially tainted by the forced labor practices inflicted on the Uyghur population. Because polysilicon is necessary for 84% of U.S. solar panels, and the XUAR produces about 56% of China’s polysilicon, most solar panel products from the PRC are likely produced using forced labor, especially once the products produced by transferred Uyghur labor are included. Thus, under the UFLPA, unless an importer can prove by “clear and convincing evidence” that forced labor was not used, CBP should not permit the importation of Chinese solar panels from China or elsewhere.

“Numerous reports have demonstrated that Uyghurs are often transferred outside of the XUAR to work in factories throughout the country, including the solar industry,” the letter observed.

The largest of these was published by the Australian Strategic Policy Institute (ASPI) in 2020. Titled “Uyghurs for Sale,” the report revealed that the Communist Party was systematically selling concentration camp victims through government “employment” companies to exploitative factories. The report identified 83 international companies – including household names in the West such as Nintendo, Nike, BMW, Apple, Gap, and Sony – who use suppliers in China whose factories received Uyghur slaves through the program.

“On Chinese websites, there are dozens of postings advertising Uighur [sic] labour, in batches of 50 to 100 workers,” Sky News observed. “Baidu, the company hosting the job postings, did not respond to a request for comment.”

The solar industry is among the most directly implicated by China’s slave labor practices. As the human rights magazine Bitter Winter noted last year, half of the world’s polysilicon, a material necessary to make solar panels, originates in just four factories in East Turkistan.

In the aftermath of the passage of the UFLPA, green energy companies reportedly expressed frustration and concern with finding Chinese suppliers for solar panels that the CBP would approve. In their letter this week, the lawmakers noted, however, that the CBP was supposed to provide a list of banned exporters as per the anti-slavery law but had yet to do so, leaving importers in limbo and potentially resulting in slave-made products entering the country.

“American taxpayers cannot be allowed to subsidize the effective enslavement of the Uyghurs and other predominantly Muslim ethnic groups,” the lawmakers asserted, asking CBP for a plan to enforce the UFLPA, particularly regarding solar panel imports, and strategies “to ensure that the American taxpayer does not subsidize Uyghur forced labor through the IRA.”