The prospect of having non-Texans manage the Alamo has many Texans seeing red. Texas Land Commissioner George P. Bush released a statement late last week saying the Alamo belongs to Texans. He also told Texans there would be “a nationwide search for a new management company.”

Last week, the Daughters of the Republic of Texas (DRT) were relieved from their management responsibilities of the Alamo. Although the DRT is credited with saving the Alamo 110 years ago, the management and operation of the Alamo by the DRT came under heavy fire in 2011 by the Texas Legislature and by the Office of the Attorney General. The DRT has managed the Alamo since 1905.

In noting there would be a 120-day transition period, the newly-elected Land Commissioner stated the search for a new management company would be country-wide.

A former Republican Senatorial District Chairman posted an article about the transition on his Facebook page, and made this comment about the possibility of someone out-of-state managing the Alamo – “If George P. Bush hires non-Texans to run the Alamo, it will be the end of his short career.” 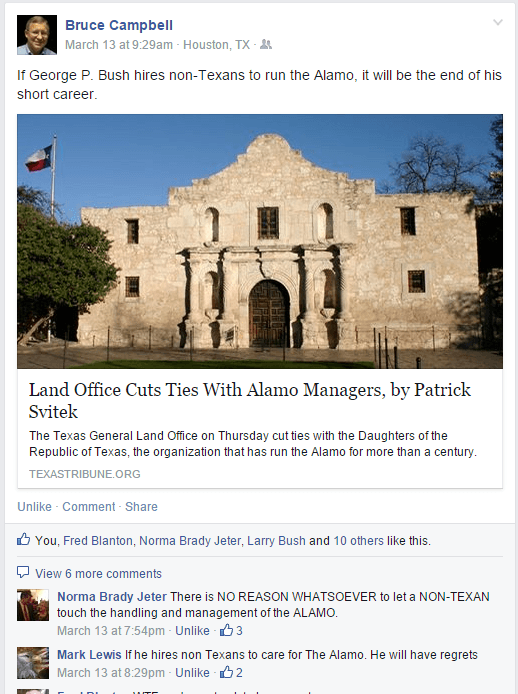 Others, including a well-respected Harris County Republican activist, a silver-haired grandmother beloved in her community not unlike Mrs. Barbara Bush, posted this comment – “There is NO REASON WHATSOEVER to let a NON-TEXAN touch the handling and management of the ALAMO.”

Another Republican wrote “Remember the Alamo! Owned, run, and enjoyed by TEXANS!”

Another said – “There needs to be a public outcry!” and “Where do we call to complain?”

Other statements included – “WTF you’re on track to be a one-termer.” This statement was made by a Republican precinct chair.

An avid supporter of the Commissioner posted on Bush’s own Facebook page:

DO NOT GO OUTSIDE THE STATE OF TEXAS FOR SOMEONE TO MANAGE THE ALAMO! I voted for you, and I spread the word to everyone I could possibly talk to on your behalf, and with God as my witness, I will do just the opposite to vote you out of office if you hire an outsider to manage our states most important landmark. There is no reason to go beyond our own borders! That would be like hiring another country to take over the Statue of Liberty!

Everyone that is opposed to this needs to go to George P. Bush‘s timeline and post their feelings about this and let him know that if he brings in some entity from outside of o[u]r state to take over the Alamo, that we will make sure his political career in Texas is over!

Another posted – “Why in the world did u step into a newly elected position in Texas and start outsourcing things especially The Alamo! U will not have my vote again if u continue this!”

KENS5 San Antonio Eyewitness News was at the Alamo interviewing folks about the possibility of a non-Texas firm managing the Alamo. Texan Joel Rando said “They better select someone in Texas or there’s going to be trouble.” Someone out of state said – “It just doesn’t feel right because they just don’t have the same history as we do in New Jersey.” A Texas woman said “I think it should stay in Texas” and then suggested the Texas Park and Recreation Department as a possible management solution.

In an initial response to an inquiry about the possibility of the management being awarded to an out-of-state entity, GLO Press Secretary Brittany Eck released this statement to Breitbart Texas:

The owner of the Alamo is and will continue to be the people of Texas. The custodian of the Alamo will remain the Texas General Land Office. The operations service vendor contract will be maintained by the Alamo Endowment, consisting of Chairman George P. Bush and six prominent Texas business and civic leaders committed to preserving the Alamo for all Texans. Becky Dinnin, Director of the Alamo, GLO employee, and longtime San Antonian, will be the direct report for all contracted vendors.

We will be posting the RFP publicly and encourage qualified entities to apply. Responses to the RFP shall be evaluated in accordance with Chapters 2155, 2156, and 2157 of the Texas Government Code and Texas Natural Resources Code, Title 2, Chapter 31. The Alamo Endowment is not obligated to accept the lowest priced proposal, but will make an award to the respondent that provides the best value to the State of Texas.

The priority is to meet the current and future needs of the Alamo complex, which includes (but is not limited to) preservation work and fundraising for a museum to house the Phil Collins collection.

Additionally, the DRT will continue to have a place of honor with the Alamo. This change simply allows a professional organization with expertise in managing major historic sites to manage operations as a contracted vendor under the strict oversight of the Texas General Land Office, the Alamo Endowment Board, and the San Antonio-based Director of the Alamo, Becky Dinnin. Oversight of the management of the Alamo will be focused on the best means to preserve and promote the Alamo as the premier historic site of Texas.

Dinnin is a descendant of Sarah Dodson, the designer of an early lone-star Texas flag in 1835. She was born in Plainview and raised in Groom outside of Amarillo, Texas. Dinnin has worked for more than a decade in San Antonio, including more than seven years with the Greater San Antonio Chamber of Commerce. You can read more about her appointment here – http://www.glo.texas.gov/glo_news/press_releases/2015/january/the-alamo.html.

George Prescott Bush is a native Texan, born in Houston where he also later obtained his undergraduate degree at Rice University before earning a J.D. from the University of Texas School of Law in Austin. He clerked for the U.S. District Judge for the Northern District of Texas in Dallas and then worked in asset management in Fort Worth. In 2007 he was commissioned as an officer in the U.S. Navy and served eight months in Operation Enduring Freedom in Afghanistan.

In 2011, then Attorney General Greg Abbott did an investigation into the financial management and conservation of the Alamo and its artifacts. The 38-page report, as reported by the San Antonio Express-News, faulted the leadership of the DRT with failure to preserve the historical Texas site. It also alleged that the leadership of the volunteer organization had misappropriated state funds and failed to raise the capital to take care of the Alamo. There were even allegations of inappropriate claims of ownership of artifacts. The report stated “It should be noted that the misconduct detailed in this report is largely attributable to the DRT’s leadership — and that conduct should not detract from the individual DRT members who tirelessly and selflessly served the Alamo for over a century.”

The Texas Legislature responded in 2011 and passed a bill that transferred control of the Alamo to the General Land Office (GLO). As reported by Breitbart Texas, the DRT filed suit to block the transfer of power but were unsuccessful. The GLO and the DRT then signed an eighteen month contract for the DRT to continue operations under the oversight of the GLO. This management was later terminated.

There have also been gift compliance issues associated with the donation of Alamo and Texas artifacts by singer Phil Collins. His donation requires that a visitor center and museum be built to house these artifacts. According to last week’s statement issued by Land Commissioner Bush – “The Alamo Endowment has been reconstituted as a major capital campaign to raise millions of dollars needed for an Alamo museum and visitor center worthy of Phil Collins’ renowned collection of historic artifacts.”

The Alamo Endowment website reiterates the statement found on the General Land Office website that there will be a 120-day transition and a “nationwide search.”

Breitbart Texas asked the GLO Press Office to confirm that Texas law does not require the GLO to submit Request for Proposals (RFPs) outside of the state of Texas for the management of the Alamo. As of press time, the Press Office was conferring with its lawyers to see if this was an accurate statement, or whether Texas Government Code section 2155.074 required it to submit requests nationwide. This section of the Government Code, entitled Best Value Standard for Purchase of Goods or Services, provides that (a) “For a purchase of goods and services under this chapter, each state agency, including the commission, shall purchase goods and services that provide the best value for the state.” (b) In determining the best value for the state, the purchase price and whether the goods or services meet specifications are the most important considerations.”  This section also provides that “other factors relevant to determining the best value for the state in the context of a particular purchase” can be considered.